Staff Sergeant William Guarnere, made famous by the "Band of Brothers" miniseries, has died aged 90. 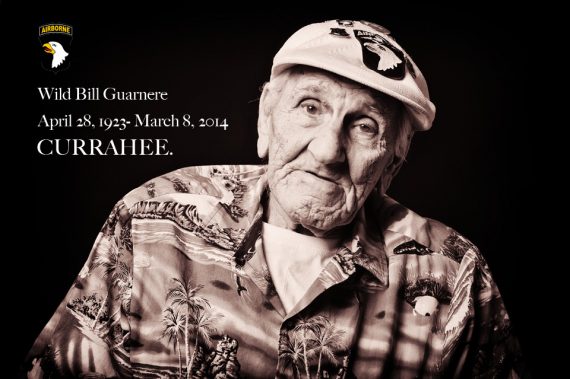 Staff Sergeant William Guarnere, made famous by the “Band of Brothers” miniseries, has died aged 90.

William Guarnere, a World War II veteran popularized by the “Band of Brothers” miniseries, has died. He was 90.

Guarnere was rushed to a hospital early Saturday morning and died of a ruptured aneurism that night, his son, William Guarnere Jr., told CNN.

“He lived a good life. He traveled a lot. He pretty much did everything he could have done,” the son said Sunday.

During the war, Guarnere earned the nickname “Wild Bill.” He lost a leg trying to save a friend on the battlefield.

The HBO miniseries was based on a book by Stephen E. Ambrose.

Guarnere’s online biography is down at the moment, replaced by the image above. The Wikipedia summary:

William Guarnere was born in South Philadelphia, Pennsylvania on April 28, 1923,[2] the youngest of 10 children, to Joseph “Joe” and Augusta Guarnere, who were of Italian origin.[3] He joined the Citizens Military Training Camp (CMTC) program during the Great Depression. Guarnere’s mother told the government her son was 17 while he was, in fact, only 15. He spent three summers in the CMTC, which took four years to complete. His plan was, upon completion of training, to become an officer in the United States Army. Unfortunately, after his third year the program was canceled due to the pending war in Europe.

After the attack on Pearl Harbor and six months before graduation, Guarnere left South Philadelphia High School and went to work for Baldwin Locomotive Works, making Sherman tanks for the Army. This greatly upset his mother, because none of the other children had graduated from high school. In response, Guarnere switched to the night shift and returned to school, earning his diploma in 1941. Because of his job, he had an exemption from military service, but did not use it.[4]

On August 31, 1942 in his hometown,[5] Guarnere enlisted in the paratroops and started training at Camp Toccoa, Georgia.

Guarnere earned the nickname “Wild Bill” because of his reckless attitude towards the Germans. He was also nicknamed “Gonorrhea”, a play on the pronunciation of his last name, as seen in Band of Brothers. He displayed strong hatred for the Germans because one of his elder brothers, Henry, had been killed fighting the German Army in the Italian campaign at Monte Cassino.

Guarnere lived up to his “Wild Bill” nickname. A terror on the battlefield, he fiercely attacked the Germans with whom he came into contact. In the early morning hours of June 6, he joined up with Lieutenant Richard Winters and a few other men trying to reach their objective, to secure the small village of Sainte-Marie-du-Mont and the exit of causeway number 2 leading up from the beach. As the group headed south, they heard a German supply platoon coming and took up an ambush position. Winters told the men to wait for his command to fire, but Guarnere was eager to avenge his brother and, thinking Winters might be a Quaker and hesitant to kill, opened fire first, killing most of the unit.[6]

Later, on the morning of June 6, he was also eager to join Richard Winters in assaulting a group of four 105 mm Howitzers at Brécourt Manor. Winters named Guarnere Second Platoon Sergeant as a group of about 11 or 12 men attacked a force of about 50. The attack led by Winters was later used as an example of how a small squad-sized group could attack a vastly larger force in a defensive position.[7]

Guarnere was wounded in mid-October 1944 while Easy Company was securing the line on “The Island” on the south side of the Rhine. As the sergeant of Second Platoon, he had to go up and down the line to check on and encourage his men, who were spread out over a distance of about a mile. While driving a motorcycle that he had stolen from a Dutch farmer across an open field, he was shot in the right leg by a sniper. The impact knocked him off the motorcycle, fractured his right tibia, and lodged some shrapnel in his right buttock. He was sent back to England on October 17.[8]

While recovering from injuries, he didn’t want to be assigned to another unit, so he put black shoe polish all over his cast, put his pants leg over the cast, and walked out of the hospital in severe pain. He was caught by an officer, court-martialed, demoted to private, and returned to the hospital. He told them he would just go AWOL again to rejoin Easy Company. The hospital kept him a week longer and then sent him back to the Netherlands to be with his outfit.[9][10]
He arrived at Mourmelon-le-Grand, just outside Reims, where the 101st was on R and R (rest and recuperation), about December 10, just before the company was sent to the Battle of the Bulge in Belgium, on December 16. Because the paperwork did not arrive from England about his court-martial and demotion, he was put back in his same position.[10]

While holding the line just up the hill south west of Foy, a massive artillery barrage hit the men in their position. Guarnere lost his right leg in the incoming barrage while trying to help his wounded friend Joe Toye (who could not get up because he had also lost his right leg). This injury ended Guarnere’s participation in the war.[11]

Guarnere received the Silver Star for combat during the Brecourt Manor Assault on D-Day, and was later decorated with two Bronze Stars and two Purple Hearts, making him one of only two Easy Company members (the other being Lynn Compton) to be awarded the Silver Star throughout the duration of the war while a member of Easy Company.

It has to be odd to suddenly be famous at age 77 for something exploits that took place during your twenties. Then again, most of us never get famous to begin with. 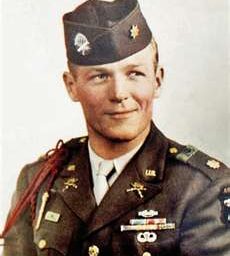