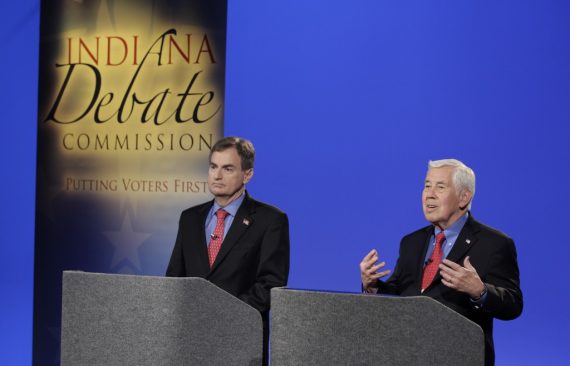 Next Tuesday, Richard Lugar, the senior member of the Republican caucus in the Senate1, faces the voters in what has become a bitter primary fight with Tea Party-backed candidate Richard Mourdock. There appears to be good possibility that Lugar will lose the primary despite having the backing of Mitch Daniels and other senior Indiana Republicans. As Nate Silver notes today, although a Mourdock victory will make the Tea Party happy, it could result in Lugar’s seat going to a Democrat in November:

If Mr. Lugar loses, it should increase Democrats’ odds of picking up the Senate seat in November. Democrats have a fairly good candidate in Indiana in the form of United States Representative Joe Donnelly, who represents the Second Congressional District and who narrowly retained his seat in a very tough environment for Democrats nationally in 2010. The Second District, which includes South Bend and Michigan City, is slightly Republican-leaning relative to the country as a whole but slightly Democratic-leaning relative to the rest of Indiana.

Still, Indiana remains a red state, despite Barack Obama having narrowly carried it in 2008. Mr. Obama’s victory came in part because his campaign put a great deal of effort into winning the state, relying on volunteers and media exposure in the Chicago market, while John McCain’s campaign put almost none in.

Nor is Mr. Mourdock in the Christine O’Donnell category of candidates. As the state treasurer, he is roughly as well-credentialed as Mr. Donnelly.

Mr. Mourdock has some standard Tea Party lines in his platform, enough to be problematic in more urban parts of the state like Indianapolis and northeast Indiana. Still, he is not all that far outside of Indiana’s political mainstream — not obviously more or less so than Mr. Donnelly, who voted for Mr. Obama’s health care bill, although he has bucked his party on other issues like gun-ownership rights and cap-and-trade.

All of that points to a close race, and the lone poll featuring a Mourdock-Donnelly matchup showed the race to be an exact tie, although with both candidates lacking name recognition.

Silver goes on to note that Mourdock would likely have an edge against Donnelly only because Indiana is, at heart, a Republican state. Barack Obama won the state in 2008, the first time a Democrat had done so since 1964, but very few analysts seem to think he’ll repeat in the Hoosier State this year. At the same time, though, Donnelly is fairly more conservative than other Democrats, much like Evan Bayh who represented the state in the Senate for twelve years. As Silver goes on to note, a Democratic pickup in Indiana, or a close  race that requires the NRSC and other groups to spend significant money in the state, would seriously complicate Republican efforts to retake the Senate this year.

Of course, this may all be moot. While current momentum appears to be with Mourdock in the Republican primary, there hasn’t been any non-partisan poll released in the state since mid-March and that one had Lugar comfortably ahead. If Lugar does manage to pull off a primary win, it’s likely that the power of incumbency would send him to a victory in November.

1 Lugar entered the Senate the same day as Orrin Hatch but, because Indiana is higher in population than Utah, Lugar is considered the Senator with the most seniority. If Lugar is re-elected and the GOP regains the Senate, he would become Senate President Pro Tempore. Otherwise, Hatch would take that position in the event of a Republican takeover.