The Senate returns tomorrow to try to pass an extension of the PATRIOT Act before it expires, but it may not be able to do so. 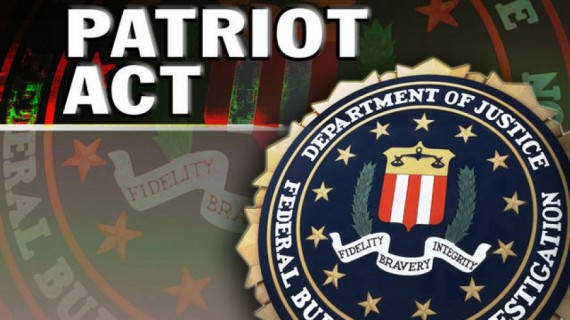 Tomorrow, the Senate will convene in a session called last week by Majority Leader Mitch McConnell after his failed effort to pass an extension to the PATRIOT Act, which expires when the clock strikes midnight on June 1st, but the debate is complicated by Republican Presidential politics:

WASHINGTON — Since 2011, when Republicans took control of the House, Congress has lurched from one deadline to the next, as Republicans and Democrats have sparred bitterly over funding for the government, the ability to lift the debt ceiling and other policy matters.

But unlike those fights, the Senate’s showdown this weekend over the future of the government’s dragnet of American phone records is not the result of a partisan fracas. It is an ideological battle within the Republican Party, pitting the Senate majority leader against the speaker of the House and, in the Senate, newcomers against long-serving members, and defense hawks against a rising tide of younger, more libertarian-minded members often from Western states.

Senate leaders are expected to try to assemble a compromise surveillance bill on Sunday that can get the required votes to proceed before the authorizing law expires Monday. President Obama and his director of national intelligence, James R. Clapper Jr., added more pressure with sharp statements on Friday and Saturday calling for immediate approval of a House-passed surveillance bill.

“A small group of senators is standing in the way, and, unfortunately, some folks are trying to use this debate to score political points,” Mr. Obama said in his weekly address. “But this shouldn’t and can’t be about politics. This is a matter of national security.”

Even if a compromise can be reached in a rare Sunday session in the Senate, all signs point to at least a temporary expiration on Monday of a key section of the Patriot Act that the government has been using to sweep up vast amounts of telephone “metadata.”

Last month, the House overwhelmingly passed a bill that would overhaul the Patriot Act and curtail the metadata surveillance exposed by Edward J. Snowden, the former contractor for the National Security Agency. But in the Senate, that measure failed on a procedural vote this month, and efforts to pass a short-term extension collapsed under objections by three senators.

On Sunday, Senator Mitch McConnell of Kentucky, the majority leader, will try again. But opponents of a quick resolution, like Senator Rand Paul, Republican of Kentucky, can easily force a delay.

“They can take things into the middle of the week,” said Representative Devin Nunes of California, the chairman of the House Intelligence Committee. “This is very likely to go on for a few days.”

Over the congressional recess last week, Senate Republican leaders reached out to Representative Robert W. Goodlatte of Virginia, the House Judiciary Committee chairman, to see if he would negotiate a compromise with Senator Richard M. Burr of North Carolina, the Senate Intelligence Committee chairman and a strong opponent of changes to current law. Mr. Goodlatte declined.

Mr. Paul signaled to political supporters that he intended to keep fighting.

“We fought a revolution over this,” he said at a Republican Party meeting on Friday in Rock Hill, S.C.

Several factors have combined to force the showdown. The revelations of the breadth of the program have increased voter distrust of it, members of Congress said. American companies have complained that foreign customers have been turned off by their products because of fears their privacy would be at risk if they purchased computers and cellphones made in the United States. Democrats and an increasing number of Republicans make up a growing alliance of members as concerned with civil liberties as national security.

“People who could not agree on anything have come together on this issue,” said Neema Singh Guliani, a legislative counsel with the American Civil Liberties Union. “That has created a different dynamic in Congress, which has been so partisan over the last several years. These divisions are not along party lines. They are over something else entirely.”

Under the bipartisan bill, known as the USA Freedom Act, changes would be made to the Patriot Act to prohibit bulk collection, and sweeps that had operated under the guise of so-called national security letters issued by the F.B.I. would end. The data would instead be stored by the phone companies and could be retrieved by intelligence agencies only after approval of the Foreign Intelligence Surveillance Act court.

That has been strongly opposed by Mr. McConnell and more than two dozen other senators who fear ending the program would endanger national security.

President Obama doubled down on his efforts to persuade Congress to renew the law in a statement from the White House late yesterday in which he claimed that allowing the act to expire would put Americans and American national security in danger.This is, of course, utterly absurd in several respects. First of all, even if the law were to expire tomorrow at midnight, American law enforcement and intelligence agencies would still have at their disposal a plethora of methods authorized under laws that predate the PATRIOT Act that allow them to conduct surveillance against suspected terrorists or foreign agents. To a large degree, the powers that were granted when the law was passed after minimal debate in the wake of the September 11th attacks consisted of powers that law enforcement agencies had been trying to persuade Congress to pass for decades prior to 2001. The terrorist attacks, and the sense of panic that swept the nation in their wake and in the wake of the anthrax attacks that occurred shortly thereafter were largely an excuse for an expansion of law enforcement power that had little connection to terrorism or to the circumstances that led to the September 11th attacks. Second, in the fifteen years that is has been law the PATRIOT Act has not assisted in the investigation or prevention of a single major terrorist attack. Indeed, the law has been used more in cases that have nothing to do with terrorism at all than it has in investigations that actually have anything to do with terrorist threats. Given that, the claims by President Obama, intelligence and law enforcement officials, and certain members of Congress, that failure to renew the PATRIOT Act would endanger the nation is nothing more than pure nonsense meant to panic the populace into supporting the passage of a law that is largely unnecessary.

In addition to people like McConnell who oppose the USA Freedom Act because they think it weakens law enforcement and intelligence, there are also those who oppose it because they think it is too strong. Chief among those are Senators Ron Wyden and Rand Paul, who led the effort in the Senate that resulted in that body’s failure to pass any bill last week. Now, Senator Paul is saying that he will use every legislative and parliamentary rule available to him to force the expiration of the PATRIOT Act:

Sen. Rand Paul announced Saturday he intends to force the expiration of the Patriot Act’s surveillance authorities this weekend by refusing to allow votes to go forward that would extend them beyond their June 1 sunset.

In a statement, Paul said he would use the power of one senator to “force the expiration of the NSA illegal spy program,” a vow that appeared to include the House-passed USA Freedom Act, which would renew but reform parts of the post-9/11 law.

“Tomorrow, we will come back with just hours left before the NSA illegal spying powers expire,” the Kentucky Republican and presidential candidate said. “Let me be clear: I acknowledge the need for a robust intelligence agency and for a vigilant national security. I believe we must fight terrorism, and I believe we must stand strong against our enemies.

“But we do not need to give up who we are to defeat them. In fact, we must not. There has to be another way. We must find it together. So tomorrow, I will force the expiration of the NSA illegal spy program.”

Paul’s pledge poured cold water on last-minute efforts by the White House, the intelligence community, tech companies and some privacy advocates to convince Paul and others to allow a quick revote on the Freedom Act, which earned 57 votes last week but fell three shy of the filibuster-60 needed to advance.

Senator Paul is apparently leaving open the possibility that the legislation currently before the Senate could be modified in a way that he would find acceptable, but if that happened it would likely mean that the Act would have to expire before anything could be accomplished. Any last minute changes to the bill in the Senate would have to be approved by the House, which is currently not in session and not scheduled to reconvene until Monday afternoon. While a modified bill could theoretically pass the House via unanimous consent, a contingent of Republican Congressman has remained in Washington for the purpose of making sure that doesn’t happen. Therefore, at the very least, it would appear that the PATRIOT Act will lapse for at least some period of time after tomorrow. Whether it ever comes back to life in some modified form, though, is a completely different question. 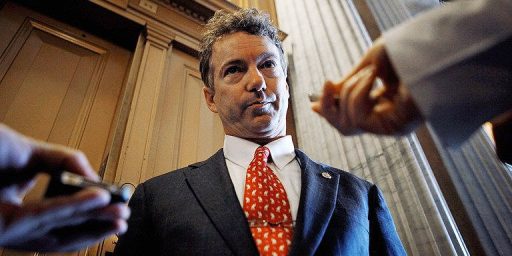