Well, this will make one heck of a lawsuit:

The family of a woman who may have frozen to death after being pronounced dead and placed in a morgue is moving forward with a lawsuit against a hospital that claims their family member “struggled unsuccessfully to escape her frozen tomb.”

Maria de Jesus Arroyo — an 80-year-old grandmother with more than 50 grandchildren — was pronounced dead in July 2010 after suffering a heart attack. A few days later, she was found in a half unzipped body bag, face-down with a broken nose and cuts and bruises to her face — injuries family members said were not there at the time she was hospitalized, according to court papers.

On Wednesday, a California appeals court ruled that the family’s medical malpractice lawsuit alleging the woman’s body was mishandled by the hospital can move forward.

”She was put into that body bag while she was alive,” said the family’s attorney, Scott Schutzman. “The cold from the hospital morgue woke her up and she was fighting her way out when she died.”

The lawsuit against White Memorial Medical Center in Boyle Heights alleging wrongful death outlines the family’s account of what happened after Arroyo was found unconscious at her home in July 2010. She was transported to the hospital by ambulance and later declared dead.

The lawsuit claims she was “prematurely” declared dead at the hospital and that she was frozen alive at the morgue before mortuary workers who arrived to transport her found Arroyo face-down in a halfway unzipped body bag. Family members said they did not see lacerations and bruises on her face until viewing her remains at the funeral home

Yea this one just seems to scream settlement.
FILED UNDER: Law and the Courts, Quick Takes 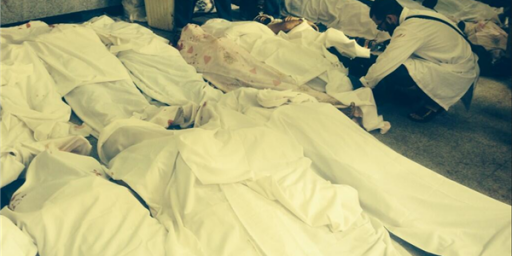