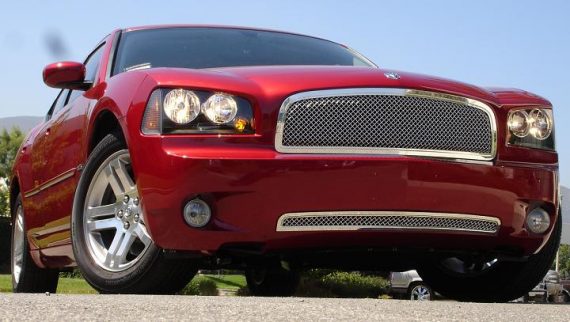 A New Jersey woman is devastated that her precious sports car — just repaired and fully gassed up — was wrecked by a suicidal man’s 40-story attempted death leap on the Upper West Side.

“I miss it. It’s my baby,” moaned Maria McCormack, who regrets lending her husband the 2008 Dodge Charger Tuesday for work. “I want to meet [Tom Magill] and say, ‘Why? Why my car out of all the cars in the city?'”

McCormack’s husband, Guy, had the $14,000 muscle car parked behind 75 West End Ave. when Magill soared from 400 feet and landed on the rear windshield and trunk.

The vehicle broke his 126-mph fall and likely saved his life — but it killed the car, which was so extensively damaged that the insurance company will total it out.

“I wonder how he feels now that he made it. Does he feel like an idiot?” said Maria. “I hope he’s OK. But I just want to know why.”

The 42-year-old mother of four from Old Bridge recently spent hundreds of dollars fixing the rear brakes — and she says she got an oil change and filled it with gas just the day before the blazing red car was crushed like a tomato can.

“I’ve had other cars, but I really loved this car.”

Now, my immediate reaction to this is to recall Toby Keith’s classic “I Love This Bar” and, in particular, this stanza:

But the blogospheric reaction is summed up by the Weasel Zippers headline “Selfish Bitch Upset That A Man (Attempting To Take His Life By Jumping Off A Building) Landed On/Totalled Her Sports Car” and the Village Voice headline “Dodge Charger Owner Bemoans Cruel Fate that Led Suicide Jumper to Land on Her Car.”

Granting that my own reaction would likely have been quite different, it strikes me that she’s perfectly entitled to her own reaction.  She didn’t know Magill from Adam.  And he was in fact trying to kill himself.  But his selfish, desperate act caused her real distress.

For most of us, that distress would have been dealing with the emotional trauma of some stranger nearly killing himself on our car.   But, presumably, she’s going to suffer a real loss here. The car may well have been her main solace in an otherwise crappy life and, at best, she’s going to have to do without it for some significant time, find a suitable replacement, and likely pay a large deductible. All because of the callous action of some stranger.

She’s entitled to be upset.