Woman Who Made Hillary Cry Voted for Obama

The woman who some think helped rally support for Hillary Clinton by helping humanize her voted for Barack Obama because she didn’t think Hillary was human long enough. The woman whose empathetic question — “how do you do it?” — sparked uncharacteristic emotion Monday from Sen. Hillary Clinton ended up voting for Sen. Barack Obama in the New Hampshire primary.

Marianne Pernold Young, 64, a freelance photographer from Portsmouth, N.H., told ABC News that while she was moved by Clinton’s emotional moment, she was turned off by how quickly the New York senator regained her “political posture.”

“I went to see Hillary. I was undecided and I was moved by her response to me,” Pernold Young said in a telephone interview with ABC News. “We saw 10 seconds of Hillary, the caring woman.”

“But then when she turned away from me, I noticed that she stiffened up and took on that political posture again,” she said. “And the woman that I noticed for 10 seconds was gone.”

This, ladies in gentlemen, is the essence of democracy. The Founding Fathers would be so proud, they’d probably cry. 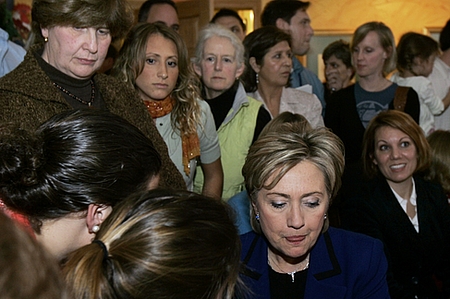