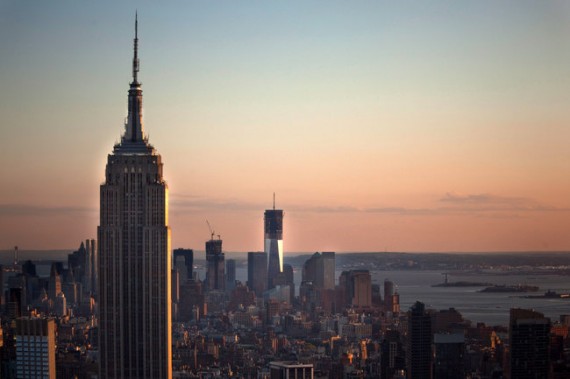 When the Twin Towers came crashing to the ground that crisp fall morning of September 11, 2001, the Empire State Building regained a title it had held from 1931 to 1972 as the tallest building in New York City (it was also the tallest building in the world during that period, a title now held by the Burj Khalifa building in Dubai). Tomorrow, that  11 1/2 year return to glory is scheduled to come to an end:

If the winds are forgiving enough overLower Manhattan — up where workers can see the whole outline of the island’s tip — a steel column will be hoisted into place Monday afternoon atop the exoskeleton of 1 World Trade Center and New York will have a new tallest building.

More important, downtown will have reclaimed its pole star.

Poking into the sky, the first column of the 100th floor of 1 World Trade Center will bring the tower to a height of 1,271 feet, making it 21 feet higher than the Empire State Building.

After several notorious false starts, a skyscraper has finally taken form at ground zero. At first, its twin cranes could be detected creeping over the jumbled tops of nearby towers. Then, at the rate of a new floor every week, it began reshaping the Manhattan skyline as seen from New Jersey. By late last fall, it could be spotted from the control tower at La Guardia Airport, eight and a half miles away.

A tower has again become an inescapable presence at the southern end of Manhattan.

The author Neal Bascomb, who drives into New York every few weeks from Philadelphia, where he lives, recalled a growing awareness that 1 World Trade Center was visible from the Verrazano-Narrows Bridge and that it was ratcheting perceptibly taller on each visit. “You know, I was happy to see it,” he said. “I thought, ‘Wonderful.’ ”

From a construction point of view, the completion of the framework, known as the topping out, will be a more significant milestone. That is to occur in a couple of months, when 1 World Trade Center reaches 1,368 feet at its rooftop parapet, identical in height to the first 1 World Trade Center, which was destroyed, with the rest of the complex, in the terrorist attack of Sept. 11, 2001. The ultimate topping out will be the completion next year of an antenna that will bring the structure’s overall height to 1,776 feet.

Yet there is an excitement to this moment that was conveyed by Patrick J. Foye, executive director of the Port Authority of New York and New Jersey, which is one of the developers of 1 World Trade Center.

“You’ve got floor-to-ceiling views in every direction,” he said in an interview last week. “If you strain your neck and look carefully enough, to the west you can see Alaska.”

Not Russia? “Not quite yet,” he said. “Maybe when we get to the observation deck.”

This is the second time a skyscraper called 1 World Trade Center has edged over the Empire State Building. The first was on Oct. 19, 1970, when a section of steel framework elevated the north tower of the trade center to 1,254 feet, four feet above Empire State’s 1,250-foot benchmark.

The new building is expected to be completed in December 2012 and opened in the Spring of 2013. It will be good to see it in the skyline.