On the lighter side of the news: 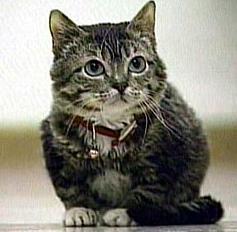 He lives in central Illinois, is two years old, weighs about three pounds and is the world’s smallest cat. He’s Mr. Peebles. The cat’s small stature has been verified by the Guinness Book of World Records. It officially lists him as the smallest living domestic cat. Mr. Peebles lives in the Good Shepherd Veterinary Clinic in Pekin. The clinic’s employees serve as collective co-owners.

A doctor at the clinic said that Mr. Peebles has a genetic defect, and he’s expected to hold onto his title for some time. Because he’s already past the age when a cat reaches normal size, Mr. Peebles probably won’t 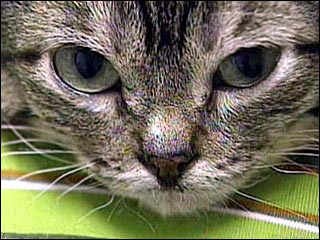 get any bigger. “I have to feed him at least four times a day to sustain his weight,” says Robin Sbendsen, co-owner of Mr. Peebles. “I do bring him to bed with me at night between my husband and I. And he curls up in my arms and sleeps next to my neck when it’s cold. And one of his best habits, he’ll lick me on the chin at night to give me a kiss.”

Presumably, there is a minimum age requirement, as all cats start off smaller than three pounds. Both of mine are considerably heavier now. Indeed, I’ve got the other problem: I’ve got to cut down Henry’s food to keep him for contending for the title of World’s Fattest Cat.