It appears as if the celebration marking the official dedication of the long-awaited World War Two Memorial will be a logistical nightmare nearly as daunting as D-Day itself: 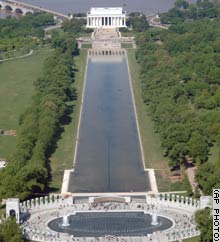 Somewhere within that seemingly boundless sea of empty folding chairs on the Mall was the one meant for Barney O’Hare.

He and about 150,000 others are expected to fill those chairs for the dedication of the National World War II Memorial today. But surveying the fenced-off seating areas yesterday afternoon, O’Hare couldn’t guess which chair he’d end up in. He was able, however, to imagine what the view from that seat might look like.

Thousands of veterans had the same idea as O’Hare yesterday, as they teemed around the seating areas for a glimpse of what might await them this afternoon. They scanned lists of prohibited items — food, glass containers, coolers, aerosols and so on. They traced shuttle bus routes on maps. They made mental note of nearby portable restrooms. They tested the plastic runners that had been laid out on the grass to make walking — or rolling, in the case of many — easier.

After a 17-year preamble and months of detailed planning, today is what the fuss has been all about: the star-spangled pageantry, the security, the emergency medical tents and all else that accompanies the country’s largest organized gathering of World War II veterans in 60 years. Today marks the culmination of an effort that began in 1987, when legislation was introduced to create the $175 million memorial.

“It’s such a huge operation,” said Doug Moyer, a contractor for the U.S. Postal Service who was among the many workers yesterday rehearsing their roles for the ceremony; his role is to help unveil a postage stamp marking the dedication. “There are a lot of people working very hard on this, and I’m sure it’ll be a late night.”

With a guest list that includes President Bush, presumed Democratic presidential nominee John F. Kerry and former presidents Bill Clinton and George H.W. Bush, security is at the top of the organizers’ list of priorities. And with an audience that includes many in fragile health, the logistics are more complicated than they would be for other large-scale events.

Dwight Pettiford, acting chief of the U.S. Park Police, strolled around the grounds yesterday and found himself inundated with questions from veterans. They wanted to double-check where they should be, how they should get there and what time they should arrive. Pettiford told them that seating areas would open at 8 a.m.; many of the veterans assured him they planned to be there bright and early to get a jump on the crowds. 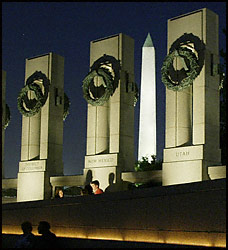 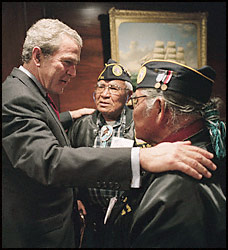 This would have been daunting enough before the security craze that 9-11 wrought. Obviously, attacking this event would be a huge propaganda coup for al Qaeda and other terrorists, so tight security is essential here, but this is going to be one grueling day for a band of brothers now in their 80s. Thankfully, the weather has cooled off for the day, with a high temperature of 76 expected.

The memorial has been open to visitors for a month now. I went to see it with my dad a couple weekends back and, unlike Charles Krauthammer, found it impressive. Unfortunately, the whole mall has lost something because of misguided efforts to stop terrorists. The once spectacular vista has been marred by fences and ugly concrete barracades. The Washington Monument is walled off. The various shrines are still impressive on their own but there’s no longer a sense of a cohesive whole.

I do agree with Krauthammer, though, that there’s something unsettling about having a giant fountain that people can dip their feet into at a war memorial. Indeed, the juxtaposition of half naked picnickers, frisbee players, and impromptu soccer games and shrines to those who never made it back from overseas combat zones is quite bizarre.