There's a new round of allegations about American spying on Germany. 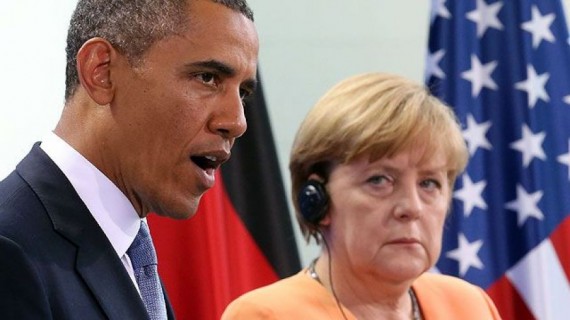 When the revelations about the National Security Agency’s programs first started coming to light a year ago, one of the more embarrassing revelations form an international point of view came when it was revealed that the NSA had been monitoring the private phone calls of German Chancellor Angela Merkel The White House later said that such monitoring was not going on at the time, but did not deny that it had occurred in the past. According to a report in a German newspaper, Obama was aware of the spying on Merkel, which actually began under the Bush Administration and before Merkel had even become German Chancellor, and authorized it to continued going forward. That revelation was one of the things that set off demonstrations against the President when he visited Germany last year, and was also reportedly the cause of more than a few icy phone conversations between the President and Chancellor. In fact, at one point it was reported that Merkel had privately referred to the entire NSA program as akin to the Stasi, which was something of a powerful rebuke from someone who had grown up in the former East Germany.  Ultimately, apparently, some sort of resolution was reached, although the issue was brought back into the forefront recently when the two nations failed to reach agreement on a so-called “no spy” agreement” under which both nations would agree not to spy on each other.  Now, though, the whole issue of American spying on Germany is back in the forefront, in a somewhat embarrassing manner.

It began last week when German authorities arrested a government employee on charges that he had passed secret documents to the United States:

BERLIN — In the latest turn in the yearlong tensions with Germany over American spying, a German man was arrested this week on suspicion of passing secret documents to a foreign power, believed to be the United States. The American ambassador, John B. Emerson, was summoned to the Foreign Office here and urged to help with what German officials called a swift clarification of the case.

The arrest came as Washington and Berlin were trying to put to rest a year of strains over the National Security Agency’s monitoring of Germans’ electronic data, including Chancellor Angela Merkel’s cellphone, and just months after the collapse of an effort by Germany to strike a “no spy” accord with the White House.

While the White House and American intelligence officials refused to comment on the arrest, one senior American official said that reports in the German news media that the 31-year-old man under arrest had been working for the United States for at least two years “threaten to undo all the repair work” the two sides have been trying to achieve.

The details of the latest case were murky. The news media reports suggested that the man, a midlevel employee of the Federal Intelligence Service, was originally arrested on suspicion of spying for Russia. The Kremlin has markedly stepped up recruitment of German informants since the uprisings in Ukraine and the resulting sanctions aimed at Russia’s economy.

But according to the news reports and the account of the American official, the man told his interrogators he had been working for the United States for some time.

German news reports said that his work included reporting on the investigations into the N.S.A.’s activities in Germany, which are the subject of a parliamentary inquiry, but the American official said he had no knowledge of whether that was the case. He spoke on the condition of anonymity to avoid complicating a diplomatically fragile intelligence issue.

The Central Intelligence Agency and National Security Agency both declined to comment on the allegations.

As The Daily Beast noted yesterday, the actual saga of this particular German agent seems to have been less James Bond and more Austin Powers, with some allegations that he was shopping much of the same information that he passed to the U.S. to other nations, possibly including Russia. Given that, it’s unclear that the person in question was really the type of long term American agent that some media reports have characterized him as having been. Despite that, the incident has introduced a new level of iciness to the relationship between Washington and Berlin, and that’s only likely to get worse with reports today that German authorities are investigation what may be a second American spy, this time inside the German military. Perhaps most embarrassing to the President, though, is that he was apparently unaware of even the initial spying arrest in Berlin when he spoke with Merkel on the phone last week:

WASHINGTON — When President Obama placed a call to Chancellor Angela Merkel of Germany last Thursday, he had a busy agenda: to consult with a close ally and to mobilize wavering Europeans to put more pressure on Russia to end its covert incursions in Ukraine.

What Mr. Obama did not know was that a day earlier, a young German intelligence operative had been arrested and had admitted that he had been passing secrets to the Central Intelligence Agency.

While Ms. Merkel chose not to raise the issue during the call, the fact that the president was kept in the dark about the blown spying operation at a particularly delicate moment in American relations with Germany has led frustrated White House officials to question who in the C.I.A.’s chain of command was aware of the case — and why that information did not make it to the Oval Office before the call.

At the White House, senior officials have expressed concern that the latest allegations could set back relations with Germany just as Mr. Obama and Ms. Merkel are struggling to move past the distrust generated by the Snowden disclosures, including the revelation that the N.S.A. had tapped Ms. Merkel’s cellphone.

What is particularly baffling to these officials is that the C.I.A. did not inform the White House that its agent — a 31-year-old employee of Germany’s federal intelligence service, the BND — had been compromised, given his arrest the day before the two leaders spoke. According to German news media reports, the agency may have been aware three weeks before the arrest that the German authorities were monitoring the man.

A central question, one American official said, is how high the information about the agent went in the C.I.A.’s command — whether it was bottled up at the level of the station chief in Berlin or transmitted to senior officials, including the director, John O. Brennan, who is responsible for briefing the White House.

For all his concerns, Mr. Obama does not plan any extraordinary outreach to Ms. Merkel, an official said, noting that some in the administration also feel that Germany should not overreact to the case or conflate it with the privacy issues raised by the N.S.A.’s surveillance.

Frankly, I am not sure that telling the Germans to calm down about all this and arguing that it shouldn’t be confused with the issues raised by N.S.A data mining is going to be a very successful strategy here. For better or worse, the revelations about the N.S.A.’s activities, including not just things like monitoring Chancellor Merkel’s phone calls but also data mining and other operations against German citizens and residents, have apparently struck a chord in Germany that has led to resentment against the U.S. As several observers explained at the time, at least part of this reaction is rooted in Germany’s own experience with secret police dating back not only to the Nazi era and the Gestapo but also as recently as East Germany and the Stasi. Additionally, there’s also the whole issue of an ally spying on an ally. While this is something that goes on far more often than anyone admits publicly, it’s never pleasant for either side when it ends up getting revealed because someone gets caught. Even if its just for domestic consumption it’s inevitable that German politicians are going to react negatively to all of this, and that its likely to have a negative impact on U.S.-German relations at least in the short term.

Embarrassing and damaging as it may be, though, as James Kircheck notes it makes perfect sense that the United States would be very interested in what’s going on in Germany given the nation’s ties to two nations with the potential to cause much trouble in the world:

Given the righteous indignation, one would suspect that Germans were fuming about Russia, a country that had perpetrated the first annexation of territory on European soil since World War II. But their muted reaction to Russia’s outrageous behavior, combined with the hysterical response to American spying, neatly illustrates why the United States has felt a need to conduct espionage in Germany: Berlin has been a less than trustworthy ally.

On the political side, Russia can count upon sympathizers spanning from the center-right business community to the post-communist left. Last year, in a highly publicized trip, Green Party politician (and former lawyer for members of the terrorist Red Army Faction) Hans Christian Stroebele visited Snowden in Moscow, something that could not have taken place without the express permission of Putin. Failing to convince the German government to grant Snowden asylum, Stroebele got the next best thing: a parliamentary investigation into American espionage. Russian espionage, judging by the attention devoted to it by the press and politicians, apparently does not exist in Germany.

In March, several parliamentarians from the German Left Party traveled at the behest of Moscow to Crimea alongside a batch of European right-wing extremists. There they observed Russia’s phony “referendum” authorizing the annexation of the Ukrainian peninsula. Weeks after leaving office in 2005, former Social Democratic Chancellor Gerhard Schroeder joined the board of a Russian government-owned energy venture to the tune of a quarter-million Euros a year. In April, as Russian-backed terrorists rampaged their way through eastern Ukraine, he celebrated his 70th birthday in St. Petersburg alongside a bevy of German businessmen and political leaders and received a bear hug from Putin himself.

Germany remains one of the Islamic Republic’s largest trading partners. American espionage in Germany—home of the Hamburg Cell, the circle of 9/11 hijackers who hung out in the port city, unmolested, for years—is aimed at protecting the national security of both America and its allies, Germany foremost among them. And while the BND cooperates extensively with America’s intelligence services, it also has worked toward giving a leg-up to German businesses, an unwritten no-no in the intelligence world.

Understandably, there will be some degree of a diplomatic price to pay from these latest spying allegations. Allies spying on allies is, as I said, one of those things that everyone does to some degree but which is never spoken of publicly. At the same time, though, it strikes me that we shouldn’t really be all that embarrassed about what’s been revealed here, except to the extent that we got caught and the President apparently spoke to the Chancellor without being aware of what had happened earlier that week. There are good reasons to keep an eye on what’s going on in Germany and, indeed, some of those reasons ultimately benefit the national security of Germany as well as the United States. Furthermore, foreign espionage does not raise the same civil liberties issues that the N.S.A.’s domestic programs do so it’s best not to conflate the two. Foreign intelligence is sometimes an unpleasant business, but that doesn’t mean it isn’t necessary and in this case it seems like its necessary.