President Bush is quietly retooling the White House staff for his reelection campaign by promoting a group of young loyalists to key positions, further concentrating power with the handful of veteran advisers closest to him.

This is greeted with a lot of snippy comments, including this one:

“He keeps promoting people up from the farm club to jobs that once were reserved for giants,” said Paul C. Light, a specialist in bureaucracy who is a New York University professor of public service. “That means a relatively green team, but one that will take direction from the coach. It could be interpreted as a sign of extraordinary hubris.”

Huh? Where is the hubris in picking the people you want for mid-level, non-policymaking positions? Heck, Bill Clinton staffed virtually his entire administration with kids right out of kindergarten, if memory serves correctly.

Bush’s inner circle, many with ties going back to his Texas days, has stayed largely in place. But there has been substantial turnover in the past few months in the next tier, including the nomination last week of deputy chief of staff Joshua B. Bolten as budget director. Bolten is trusted by Bush but is largely unknown outside the White House. * * * By contrast, President Bill Clinton’s second budget director was Alice M. Rivlin, a former director of the Congressional Budget Office who was well-known on Capitol Hill.

Bolten is 48 years old–no kid–and has impeccable credentials. Princeton class of 1976. Stanford Law class of 1980. Law Review editor. Federal clerkship. Several commissions. General Counsel of US Trade Rep and Director of Legislative Affairs under Bush 41. Goldman Sachs. Why isn’t this as impressive as being head apparachnik of a notoriously bad forecasting bureau? 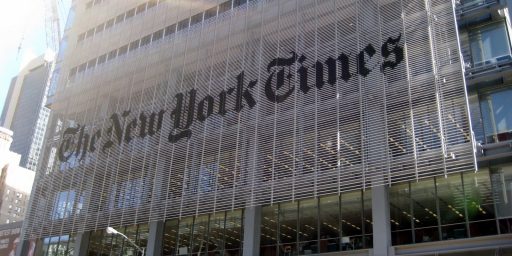