Two centuries ago, a war that makes less and less sense with the passage of time began. 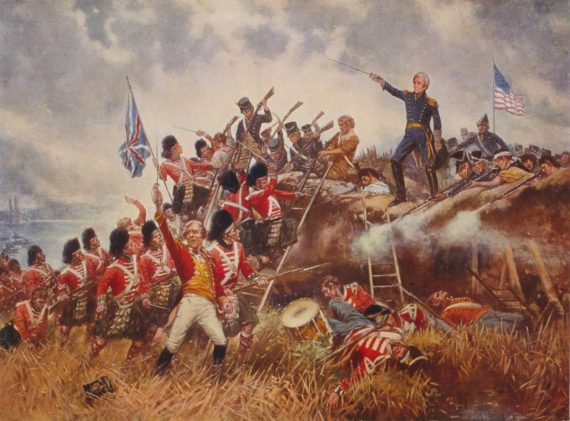 Two hundred years ago today, the War of 1812, the first war that the United States of America fought as a nation, began when President James Madison signed the Declaration Of War that had finally been approved, after rather contentious debate, by Congress the day before. The final vote approving a Declaration of War was the closest such vote in American history, and ironically also the first. Just about three years later, the war would come to an end with very little actually changed between the United States and its former Colonial maaster Great Britain. We didn’t lose the war despite the fact that the British had managed to blockade Baltimore, invade the country, and chase President Madison into hiding when they captured Washington, D.C. and burned the White House. We didn’t win either, though, considering the fact that efforts to expand American territory north into Canada ended in failure. The one battle of the war that is still remembered by history, the Battle of New Orleans, created an American hero in Andrew Jackson, but it also gained the historical distinction of having been fought after the United States and Britain had reached agreement on a peace treaty during negotiations in the Belgian city of Ghent.

Two centuries later, it’s hard to even agree on what the aims of the war actually were. The impressment of American sailors by the British Navy was one issue that aroused considerable ire in the United States, but the conflict was also wrapped up in support allegedly given to Native Americans in the Northwest Territories by the British Army, as well as efforts by the British to restrict trade with France during the ongoing Napoleonic Wars, which were arguably more important to London than the conflict with that minor nation on the East Coast of North America. By the time the War was over, though, it was decidedly unclear what the fighting was all about other than perhaps a reflection of the fact that a conflict of some kind between the United States and the British in North America had been inevitable ever since the Revolutionary War had ended.

The war did have many important consequences for history. It was the last time that the United States and Britain would meet as enemies in war, and its resolution was arguably the beginning of a change in how both nations viewed each other that evolved eventually into the “special relationship” that has shaped the world for most of the past century. It marked the beginning of the end of British involvement in North America and led to the formation of a national identity of the nation that eventually became Canada. And, it began the process by which the United States would become a continental nation.

For most contemporary Americans, though, it’s a war shrouded in unclear goals that doesn’t even have a decent name:

The name is not even a very thorough description of the war’s timing. If you count the Battle of New Orleans, which was fought after the peace treaty was signed, the war lasted until early 1815.

The bicentennial of the War of 1812 — which began 200 years ago today — happens to coincide roughly with the sesquicentennial of the Civil War. The latter was known by several names before general usage shifted decisively in favor of “Civil War.” Southerners favored “War Between the States”; Northerners, “War of the Rebellion.” “Civil War” may seem bland in comparison, but at least it makes a clear statement about the nature of the conflict.

The same cannot be said for “War of 1812.” It’s a lousy label, and we should grasp the opportunity offered by the 200th anniversary of the conflict to adopt a better one.

The author suggests the title the “Second War Of Independence” which seems appropriate if you take the historical view of what the impact of the war really turned out to be, specifically including the fact that its end finally marked the time when Britain seemed to accept the sovereignty of the United States. However, given that it’s been 200 years now, it seems like the name has kind of stuck and drawing the connections between that war and the one fought from 1775-1783 isn’t quite that simple.

What really strikes me about the War Of 1812, though, is the fact that it wasn’t just America’s first war as a sovereign nation, it was also the first war based on ambiguous goals and sometimes dubious reasoning, and it’s a reminder that there really have been very few “good” wars in our history where the lines between good and evil were so easy to see. The Mexican War certainly doesn’t qualify, and the Civil War was a national tragedy all around even if it did ultimately led to the end of slavery. Perhaps World War II is the one war that qualifies for the “good” war distinction, although one could make the argument about the Persian Gulf War as well, especially given the fact that it didn’t turn into a war of conquest to the gates of Baghdad. The others? Just as ambiguous as the war whose anniversary we mark today. One wonders how history will view them 200 years later.