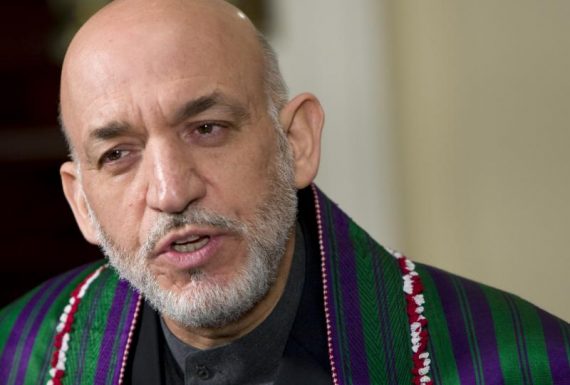 KABUL, Afghanistan — Two senior Afghan officials were showing President Hamid Karzai the evidence of the spectacular rocket attack on a nationwide peace conference earlier this month when Mr. Karzai told them that he believed the Taliban were not responsible.

“The president did not show any interest in the evidence — none — he treated it like a piece of dirt,” said Amrullah Saleh, then the director of the Afghan intelligence service.

Mr. Saleh declined to discuss Mr. Karzai’s reasoning in more detail. But a prominent Afghan with knowledge of the meeting, who spoke on condition of anonymity, said that Mr. Karzai suggested in the meeting that it might have been the Americans who carried it out.

Minutes after the exchange, Mr. Saleh and the interior minister, Hanif Atmar, resigned — the most dramatic defection from Mr. Karzai’s government since he came to power nine years ago. Mr. Saleh and Mr. Atmar said they quit because Mr. Karzai made clear that he no longer considered them loyal.

But underlying the tensions, according to Mr. Saleh and Afghan and Western officials, was something more profound: That Mr. Karzai had lost faith in the Americans and NATO to prevail in Afghanistan.

For that reason, Mr. Saleh and other officials said, Mr. Karzai has been pressing to strike his own deal with the Taliban and the country’s archrival, Pakistan, the Taliban’s longtime supporter. According to a former senior Afghan official, Mr. Karzai’s maneuverings involve secret negotiations with the Taliban outside the purview of American and NATO officials.

“The president has lost his confidence in the capability of either the coalition or his own government to protect this country,” Mr. Saleh said in an interview at his home. “President Karzai has never announced that NATO will lose, but the way that he does not proudly own the campaign shows that he doesn’t trust it is working.”

People close to the president say he began to lose confidence in the Americans last summer, after national elections in which independent monitors determined that nearly one million ballots had been stolen on Mr. Karzai’s behalf. The rift worsened in December, when President Obama announced that he intended to begin reducing the number of American troops by the summer of 2011.

“Karzai told me that he can’t trust the Americans to fix the situation here,” said a Western diplomat in Kabul, who spoke on condition of anonymity. “He believes they stole his legitimacy during the elections last year. And then they said publicly that they were going to leave.”

After several months of seeming to have calmed down in the wake of the uproar that followed his controversial, and most likely corrupted, election “victory,” it seems that Karzai has once against returned to the phlegmatic, seemingly irrational at times, behavior that we saw several months ago when he was doing things like threatening to join the Taliban. If nothing else, Karzai has proven that he is an unreliable “ally,” a fact which itself calls into question the entire reason for the American mission in Afghanistan, which at this point seems to be reduced to fighting the Taliban that Karzai threatened to join and propping up Karzai’s seemingly corrupt regime.

I’ve been asking for a couple years now what the heck we’re doing in Afghanistan, and when I see the leader of the nation we’re supposed to be defending acting like this, it just makes me wonder why we aren’t getting out of their faster.