An Analogy on Hierarchy (and the Lack thereof) in Party Behavior

An attempt to explain the consequences of institutional design. 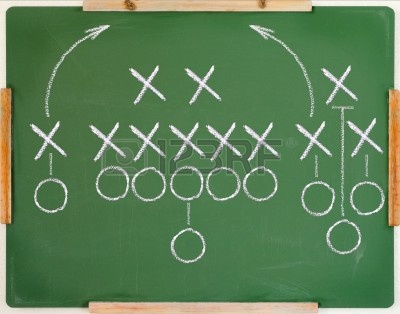 I thought of this analogy this morning to describe, at least to some degree, the functional consequences of nonhierarchical parties in the US in the context of legislative behavior.  I left it out of the post on Roy Moore and US parties, as it had already grown rather lengthy.

Let’s consider a football team.  In the normal course of action, a head coach recruits players to fill the needs of the team.  He recruits a quarterback, a running back, linemen, receivers, etc.  The goal of the recruitment is to fill the various slots on the team so that they can execute a specific offensive and defensive approach to the game.  Under ideal conditions, the coach would be able to shape the team precisely as he wanted.  While occasional mistakes would be made in terms of talent evaluation, the pieces needed (e.g., a running quarterback v. a pocket passer) would be in place.  Further, the coach has the right to decide which players make the team, who gets cut, and so forth.

The above describes a hierarchical system.

Now consider a different scenario.  What if the players were not selected via direct recruitment, but by the fans of the team voting on who was selected.  The coach could encourage a given potential quarterback to run for the position, and he could even make appeals to the fans as to the type of quarterback needed, but the choice was ultimately up to the fans.  Further, each candidate for each position would have the support of various fan groups and be able to raise money to finance their own campaign.  Maybe a given quarterback candidate or fan faction thinks that the team would be better off running the spread option offense, rather than the pro style offense that the coach prefers.  If elected, the coach would have to adapt to his talents.  Further, the coach could not cut anyone–players once elected stayed on the team until the end of a two year commitment and could run again to be placed back on the team.

What if a particularly charismatic running back candidate was able to get elected, but turns out he really does not have the talents he promised the voters?  Well, too bad, that’s your running back (and so forth). Heck, what if a faction of the defense line insisted on running a 3-4 system even though the linebackers who won their positions were far more suited to the 4-3? Or, dare I say, one of your corner-backs was found to have dated a 14 year-old?

Beyond problems with the players, the fans are not experts on football (although they think they are).  They do not have the same level of information about the potential players, nor as deep an understanding of the coach’s system when they make their choices.

Now, sure, once elected the players are all on the same team, but power is dispersed.  The fans have some power, the coach has some power (he calls the plays, at a minimum), and the players have power as well.  This is a nonhierarchical scenario.

The hand-picked team and the fan-picked teams are clearly two different creatures.

The nonhierarchical scenario is how US political parties work.  Voters, party leaders, and candidates are all on the same team, but the party leaders do not have hierarchical control over the candidates (i.e., they do not create the team).  Instead, candidates are beholden to voters (specifically primary voters, who are not the same as general election voters–and keep in mind that they are vote in typically non-competitive districts that are often gerrymandered).  This does not mean that the party cannot work as a unit, but it does affect exactly how cohesive the unit is.  Further, this prevents party leadership from offering a coherent vision to voters (and it means that sometimes it has to accept players it does not want to put on the field).  It also means that the party can mean different things to different people in wildly disparate ways (Tom Cotton v. Susan Collins, for example).

The analogy needs work, but I hearken back to a tagline of my old blog and call this a “rough draft of my thoughts.”  I certainly understand that a party and a football team are not fully analogous, as a party (even a Congressional caucus) does not act with the same shared purpose and goal as consistently as does a sports team.  Further, the reality is that a party has connection to voters in terms of a responsibility to be representative in a way that a team does not owe to its fan base.

Nonetheless, the idea of a political party is that it would be able to present to the electorate a shared vision for governance and that electorate would have the ability to select or reject that vision.  If a party is at odds with itself, it is more difficult to project that vision and it muddles the choices that voters have.  In most democracies, parties get to choose their own players, and field a team for the voters to accept, or reject.  In the US, the team is not selected by leadership, but is instead selected by outside forces (primary voters).  This is especially true when voters can, by supporting insurgents, reshape parts of the party (as is possible with primaries in the US). And, hence, the party can end up with a nominee like Roy Moore (or Sharon Angle or Christine O’Donnell or Todd Akin or Donald Trump) that it might not prefer to have, but nonetheless has to live with.  And there are those who are less dramatic examples that sit in Congress now.  This affects both governance and representation, and therefore is no small thing.

At a minimum, from the point of view of simple understanding, US parties are far more like the fan-selected team than the coach-selected team used in most representative democracies.