Andrew Cuomo’s name has been mentioned as a Presidential candidate since he took office as Governor of New York after the 2010 elections, but he’s apparently made clear that he would stay out of the race if Hillary Clinton decided to run:

A “Cuomo administration insider with direct knowledge of the situation” told the Post that Cuomo believes if Clinton runs, she’ll receive strong support, leaving him no path to the Democratic nomination.

“The governor has told people in recent weeks that there’s not a chance for him to run if Hillary gets in the race because she’ll easily wrap up the Democratic nomination,” the insider said.

“He knows that and he accepts that, and so he won’t even be thinking at all in those terms — unless Hillary decides not to run, which seems unlikely,” the insider added

I suspect that Cuomo isn’t the only potential Democratic candidate thinking this. While I agree that her nomination would not be inevitable, Hillary Clinton would enter the 2016 field as the near-prohibitive favorite and there would be significant pressure put on other potential candidates to either step aside or not run a serious campaign. In the end, 2016’s Democratic nomination fight could end up looking a lot like 1992 when the field consisted of Bill Clinton and a field of lightweights like Jerry Brown, Tom Harkin, and Paul Tsongas. Of course, it was 1992 when Andrew Cuomo’s father famously dithered over whether or not to run for President at a time when large numbers of Democrats were virtually begging him to. One doubts that the son will be as indecisive as the father. 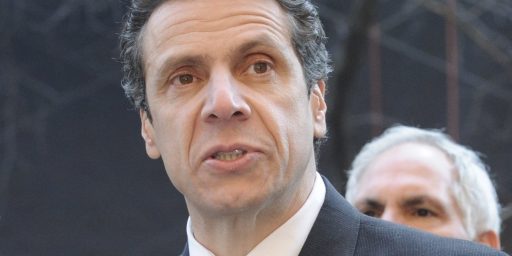