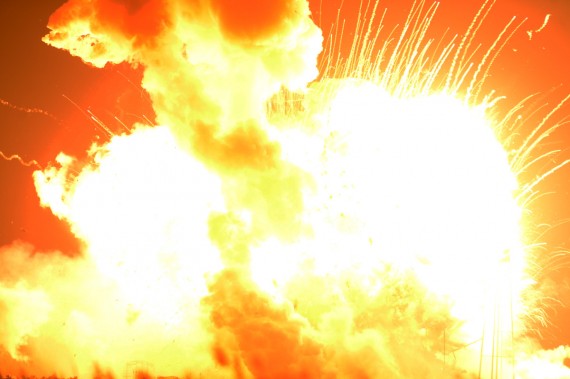 An Orbital Sciences Antares rocket carrying some 5,000 pounds of cargo for the International Space Station exploded seconds after liftoff from a NASA launch facility on the Eastern Shore of Virginia in a spectacular explosion reminiscent of the failures of the early days of the space program:

The Antares rocket, carrying 5,055 pounds of supplies, science experiments and equipment, lifted off on schedule at 6:22 p.m. from NASA’s Wallops Flight Facility in eastern Virginia.

But soon after it rose into the sky, there was a flash of an explosion. “The ascent stopped,” Frank L. Culbertson Jr., the executive vice president of Orbital Sciences Corporation, the maker of the rocket, said during a news conference Tuesday. “There was some disassembly of the first stage, it looked like, and then it fell to earth.”

No one was injured

Orbital, based in Dulles, Va., first launched a 14-story-high Antares rocket on its maiden flight in April last year. It then conducted a demonstration flight to the space station to show NASA the capabilities of the rocket and the cargo spacecraft. Then came two more flights carrying cargo to the space station, part of a program in which NASA has hired private companies to ferry cargo to the space station. Tuesday’s launch would have been the third of eight cargo missions under a $1.9 billion contract.

NASA officials said the failure would not cause immediate issues for the space station, which had adequate supplies to last at least until next spring. SpaceX’s next cargo mission is scheduled for December and Russia on Wednesday successfully launched its own resupply cargo ship from the Baikonur launch site in Kazakhstan.

“We have plenty of capability to support the crew on board,” said Michael T. Suffredini, the manager of the space station program.

The launch of this rocket, which was originally scheduled for early Monday evening but scrubbed because the discovery of a boat within the launch safety range delayed the launch past the scheduled time window, was supposed to have been visible to the naked eye as it ascended to much of the East Coast from Massachusetts all the way down to the northern tip of South Carolina. Northern Virginia was well within that window, and indeed within the area where visibility would have been best, but since I was in an area where there isn’t really a clear line of sight to the east, I was watching the NASA live feed over the Internet. I’m obviously no rocket engineer, but the launch itself looked like it had gone off just fine, but seconds after the rocket cleared the tower it appeared to list just a bit to the left and then explode in a massive ball of fire that was made even more striking by the dark skies of early evening. The picture above looks to have been taken seconds after that when the rocket and its debris descended back down onto the launch pad, which appears to have sustained some serious damage and is likely out of commission for some time to come. In that respect, fortunately, there are still the launch facilities at Cape Kennedy, which is where another supply mission to the ISS aboard a Space X rocket is currently scheduled to launch in Florida. Additionally, there was another scheduled launch of a Soyuz rocket headed to the ISS from the Russian launch facility in Kazakhstan this morning, but it seems unlikely that there would have been sufficient time to stock it with anything replacing the supply material that was lost last night.

Here’s the video of what was running on the live feed, starting about two and a half minutes before launch, and ending just after the explosion:

And here’s one from Hampton Roads television station WVEC taken by its traffic plane, which was flying well outside of the launch zone, but still close enough to catch the launch and explosion on its cameras:

The Washington Post also has a collection of amateur video taken by people who were at the Wallops Island viewing area, or across the bay on Assateague Island.

It will take some time for the cause of yesterday’s failure to be determined, of course, but initial speculation from people with knowledge of the subject suggested that the most probable explanation centered on some sort of massive engine or guidance failure. In that regard, its worth noting that Antares utilizes refurbished engines from a seemingly unlikely source:

The tale of the engine that propelled the Antares rocket, which exploded in a spectacular ball of flame in Virginia Tuesday night, begins four decades ago, thousands of miles away, in a land of communism and Sputnik. There, in the Soviet Union, rocket scientists conceived and built dozens of rocket engines that were meant to power Russian astronauts into the cosmos. But it didn’t work out that way.

Instead all four launches of the mighty N1 Soviet rocket, which used an earlier iteration of the engine used in Thursday’s launch, failed between 1969 and 1972. And as the Soviet Union abandoned the idea of putting cosmonauts on the moon, those engines languished in Russia “without a purpose,” reported Space Lift Now.

That was until they were snapped up by Dulles-based Orbital Sciences, which built the rocket that exploded. It now uses refurbished versions of those Russian engines to propel missions to the International Space Station. To be clear, investigators say they do not know what caused Tuesday’s explosion, which destroyed hundreds of millions of dollars worth of equipment. But some observers are now questioning those Soviet-era engines.

On Tuesday night, an Orbital executive complained there aren’t more modern alternative to the decades-old engines, the Guardian reported. “When you look at it there are not many other options around the world in terms of using power plants of this size,” said Frank Culbertson, the company executive vice-president. “Certainly not in this country, unfortunately.” The first issues with the rocket appeared to arise, he said, during the rocket’s first stage, when it was powered by Soviet engines. ”The assent stopped [and] there was some, let’s say, disassembly of the first stage, after which it fell to earth,” he said.

Regardless of the outcome of the investigation, the explosion is likely to stall the ambitions of Orbital Sciences, which has a $1.9 billion contract to make eight supply missions to the international space station. It shed $266 million in market value Tuesday night. What’s more, this is not Orbital’s only recent engine-related explosion.

In May, one of its refurbished Soviet engines failed at the Stennis Space Center in Mississippi. “Sources claim the engine ‘exploded,'” reportedNASA Space Flight. “The failure is currently under evaluation.”

The main competitor to Orbital Sciences for the contracts to ferry supplies, and eventually passengers to the International Space Station, is likely to benefit from this setback as well, and has long been critical of Orbital’s decision to use a rocket design that failed where Saturn V’s engines succeeded spectacularly:

Elon Musk, the CEO of Orbital’s competitor SpaceX, has long warned against using such decades-old technology. Calling it one of the “pretty silly things going on in the market,” he told Wired last year that some aerospace firms rely on parts “developed in the 1960s” rather than “better technology.” He called out Orbital Sciences in particular. It “has a contract to resupply the International Space Station, and their rocket honestly sounds like the punch line to a joke,” he said. “It uses Russian rocket engines that were made in the ’60s. I don’t mean their design is from the ’60s — I mean they start with engines that were literally made in the ’60s and, like, packed away in Siberia somewhere.”

That synopsis isn’t that far from the truth. After the N1 rocket failed in the early 1970s, the Soviet Union pulled back on its space ambitions, and its engines went into hibernation, Space Flight Now reported. “After the engines were built, Soviet space dreams were adjusted to focus on Earth-orbiting space stations, leaving the engineering marvels in storage without a purpose.”

They were eventually brought to the United States in the 1990s for a California-based company looking to supply engines for the Atlas 5 rocket, but another engine was ultimately chosen, the news agency said. And the “NK-33 appeared to be left in the dust for a second time until Orbital Sciences came along.”

WVEC is also reporting that engine problems were the reason for a delay of the launch of another Antares rocket scheduled for the summer:

WALLOPS ISLAND – Problems with the engine that was used to power the Antares 130 rocket, which exploded during an attempted launch on Tuesday, delayed a previous launch scheduled for June.

The Antares 130 rocket was being used for the first time in Tuesday’s launch. The new rocket included bigger engines and added fuel capacity designed to give the rocket a larger payload.

The Antares rocket is designed and produced by Orbital Sciences Corporation, which has a contract with NASA to conduct eight re-supply missions for the International Space Station. Tuesday’s launch was to be the third such mission.

A failed test of the engine used on the Antares rocket, the AJ26, delayed the second re-supply mission scheduled for earlier this summer.

According to NASA, the engine failure happened in late may during a test at the Stennis Space Center. The engine that failed was not scheduled to be used until a 2015 mission but the failure prompted Orbital Sciences Corporation to delay all flights until it could conduct further testing.

Tuesday’s launch was the fifth total launch for Orbital Sciences Corporation but the first with the larger Antares 130 rocket, which NASA says was developed specifically to launch the Cygnus spacecraft.

This incident reminds us, of course, that space travel remains a risky and sometimes dangerous undertaking. Fortunately, there was no loss of life, but we’ve seen that happen plenty of times with Apollo I, Challenger, and Columbia, not to mention near disasters such as Apollo 13 and losses based on seemingly dumb mistakes like the failure to properly convert measurements from English to Metric that caused the loss of the Mars Climate Orbiter. What caused last night’s events, whether it was the refurbished Soviet era engines or something different, will likely be uncovered at some point and Orbital will either make the proper adjustments and get back on track, or it will be surpassed by the competing designs from SpaceX and Boeing. So, yesterday’s loss was disappointing, but it was ultimately just a stumble on a continuing journey.