An inexcusable assault on an utterly defenseless African-American teenager.

An Arizona Sheriff’s deputy is under investigation after a video emerged of him beating and brutalizing a 15-year-old African-American boy who is also a quadruple amputee:

The shirtless 15-year-old screams as he lies facedown on the kitchen floor of his Tucson group home. He has no arms or legs, so he can’t flee or fight back. But a sheriff’s deputy at least twice his size is crouching over him and pinning him to the ground, using his body weight to restrain the quadruple amputee.

The eight-minute cellphone video, which was first published by KOLD, has now prompted an internal affairs investigation at the Pima County Sheriff’s Department. A spokesman told The Washington Post on Friday that the deputy in the video, Manuel Van Santen, has been placed on administrative leave.

But Pima County Public Defender Joel Feinman told The Washington Post that the disturbing incident likely wouldn’t have come to light if it weren’t for another teenager at the group home, who recorded the confrontation and then had his head pushed into the wall by deputies.

“These are kids who have already been traumatized in some way,” said Feinman, whose office is representing both boys. If a parent reacted to their teenager acting up in the same way the deputy did, he added, “they might be arrested for child abuse.”

While most information about the teens is being withheld to protect their privacy, Feinman said that Immanuel, the 15-year-old quadruple amputee, is in state custody because he was abandoned by his parents.

On the morning of Sept. 26, an adult who works at the group home called police to report that Immanuel had knocked over a trash can and was yelling and screaming. Feinman isn’t sure what got the teenager riled up, and, in his opinion, it doesn’t matter.

“Fifteen-year-olds who have not been through what Immanuel went through act out all the time,” he pointed out.

The deputy from the Pima County Sheriff’s Department who responded to the call determined that Immanuel was disturbing the peace and decided to restrain him, Feinman said. That’s when C.J., a 16-year-old who also lives at the group home, began surreptitiously recording from an adjoining room.

At the video’s start, a white deputy in wraparound sunglasses can be seen kneeling on the ground and holding the black teenager in a headlock. Immanuel grows increasingly upset, his voice rising to a frantic shriek as he tells the officer not to hold him down.

When the deputy loosens his grip, Immanuel tries to shake him off and break free, but he doesn’t get far. The officer tackles him, wrapping his arms around the teenager and practically lying on top of him as he wrestles him to the floor. An uncomfortable minute passes as the quadruple amputee swears and screams at the deputy, who uses one forearm to hold him pressed to the ground.

Eventually, Immanuel stops protesting and the officer lets him get up, asking him what his problem is, and why he kept moving when he was told not to move. As the 15-year-old insists he doesn’t have a problem, the cop gets louder, bending over so that his face is inches away from the teenager’s.

“I will raise my voice to you whenever the [expletive] I want, you understand?” the officer yells.

C.J., who has been recording the scene as he eats his breakfast in the next room, interrupts. “Hey, you asked him a question, and he answered,” he tells the deputy.

“Shut the hell up!” the cop snaps back. He tells the 16-year-old to go to his room; C.J. responds that he’s eating his cereal and isn’t allowed to be in his room. The deputy storms over, screaming at C.J. and telling him to stay out of something that doesn’t involve him. “You shut the hell up!” he yells again. C.J. tells him to get out of his face.

“You’re going to get arrested, too,” the cop says.

A third teenager takes the phone and begins filming as C.J. is turned around and placed in handcuffs. Without warning, the deputy slams the head of the unsuspecting 16-year-old into the wall. There’s a loud crash, and then the black teen is led to a squad car by the two officers, who appear to be white.

Both C.J. and Immanuel were jailed for disorderly conduct, Feinman said. The deputy hadn’t been wearing a body camera, but when C.J. met with his attorney from the public defender’s office, he suggested watching the video he had captured before his arrest.

Here is the most complete version of the incident I could find:

There really isn’t very much that can or needs to be said by way of commentary here. Regardless of the level of resistance that the cop in question was getting from the teenager involved here, the fact remains that he should have been able to subdue him for arrest without engaging in this kind of behavior. Indeed, the fact that the kid is disabled seems to argue strongly in favor of labeling what the cop did here as nothing short of torture and recognizing the fact that the teenager in question was responding in the manner that he did solely out of a survival instinct.

It’s also not surprising that this is yet another example of a police officer engaging in outrageous behavior toward an African-American male. The fact that this time it was someone who clearly could not fight back just makes the situation far, far worse than it would have been otherwise. To that end, I suppose we can give thanks that the cop didn’t shoot the unnamed teenager or use a TASER that could have caused serious bodily injury. Notwithstanding that, what happened here is nothing short of an inexcusable assault for whih this officer ought to be charged.

FILED UNDER: Crime, Law and the Courts, Race and Politics, police abuse 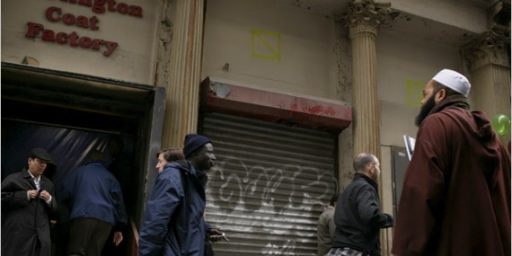