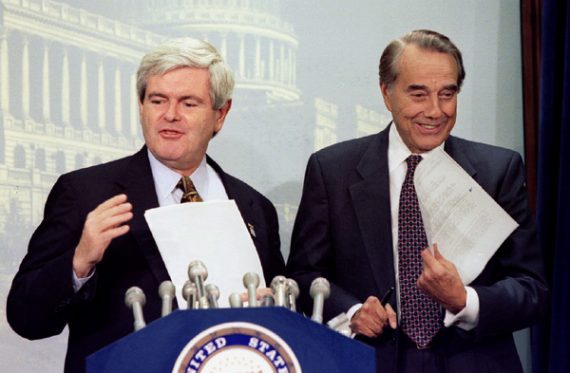 The Republican old guard is continuing to become more public about their problems with Newt Gingrich, and today the man who led Congress with Gingrich for two years pretty much throws the former Speaker under the bus:

I have not been critical of Newt Gingrich but it is now time to take a stand before it is too late.  If Gingrich is the nominee it will have an adverse impact on Republican candidates running for county, state, and federal offices. Hardly anyone who served with Newt in Congress has endorsed him and that fact speaks for itself. He was a one-man-band who rarely took advice. It was his way or the highway.

Gingrich served as Speaker from 1995 to 1999 and had trouble within his own party. Already in 1997 a number of House members wanted to throw him out as Speaker.  But he hung on until after the 1998 elections when the writing was on the wall. His mounting ethics problems caused him to resign in early 1999. I know whereof I speak as I helped establish a line of credit of $150,000 to help Newt pay off the fine for his ethics violations. In the end, he paid the fine with money from other sources.

Gingrich had a new idea every minute and most of them were off the wall.  He loved picking a fight with Bill Clinton because he knew this would get the attention of the press. This and a myriad of other specifics helped to topple Gingrich in 1998.

In my run for the presidency in 1996 the Democrats greeted me with a number of negative TV ads and in every one of them Newt was in the ad.  He was very unpopular and I am not only certain that this did not help me, but that it also cost House seats that year. Newt would show up at the campaign headquarters with an empty ice-bucket in his hand — that was a symbol of some sort for him — and I never did know what he was doing or why he was doing it.

I don’t think it’s much of a secret that the relationship between Dole and Gingrich wasn’t all that great. It was apparent during the Government Shutdown crisis of 1995 and 1996 that the two weren’t necessarily on the same page, although Dole never did go behind the Speaker’s back to cut his own deal or otherwise seek to undermine him. Nonetheless, these are some pretty harsh words, although I guess that’s no surprise considering it’s Bob Dole we’re talking about.

And no, I have no idea what the ice bucket could have been about either.

Photo via The Atlantic