Changes To Skype Will Make Monitoring By Law Enforcement Easier

If you use the popular online phone service Skype, you might be interested to know that recent software changes may make it easier for law enforcement to monitor conversations:

Skype, the online phone service long favored by political dissidents, criminals and others eager to communicate beyond the reach of governments, has expanded its cooperation with law enforcement authorities to make online chats and other user information available to police, said industry and government officials familiar with the changes.

Surveillance of the audio and video feeds remains impractical — even when courts issue warrants, say industry officials with direct knowledge of the matter. But that barrier could eventually vanish as Skype becomes one of the world’s most popular forms of telecommunication.

The changes to online chats, which are written messages conveyed almost instantaneously between users, result in part from technical upgrades to Skype that were instituted to address outages and other stability issues since Microsoft bought the company last year. Officials of the United States and other countries have long pushed to expand their access to newer forms of communications to resolve an issue that the FBI calls the “going dark” problem.

Microsoft has approached the issue with “tremendous sensitivity and a canny awareness of what the issues would be,” said an industry official familiar with Microsoft’s plans, who like several people interviewed for this story spoke on the condition of anonymity because they weren’t authorized to discuss the issue publicly. The company has “a long track record of working successfully with law enforcement here and internationally,” he added

Hacker groups and privacy experts have been speculating for months that Skype had changed its architecture to make it easier for governments to monitor, and many blamed Microsoft, which has an elaborate operation for complying with legal government requests in countries around the world.

“The issue is, to what extent are our communications being purpose-built to make surveillance easy?” said Lauren Weinstein, co-founder of People for Internet Responsibility, a digital privacy group. “When you make it easy to do, law enforcement is going to want to use it more and more. If you build it, they will come.”

To be fair, if law enforcement obtains a search warrant to monitor the Skype communications of a certain person, it wouldn’t be any different from current wiretap orders that permit police to listen in to conversation over land lines and cell phones and to monitor text messages. As long as they’ve made an adequate showing of probable cause to a judge, then the 4th Amendment is satisfied. The obvious concern, of course, is that this technology will be used for extra-judicial monitoring in the same manner that the National Security Agency monitors other forms of communications.

It does seem that some criminals have moved to technologies like Skype precisely because they know their communications can’t really be monitors. However, now that they know that they may be wiretapped on Skype, it’s likely they’ll move on to some other form of communications. Meanwhile, the privacy of ordinary Americans will continue to be chipped away. 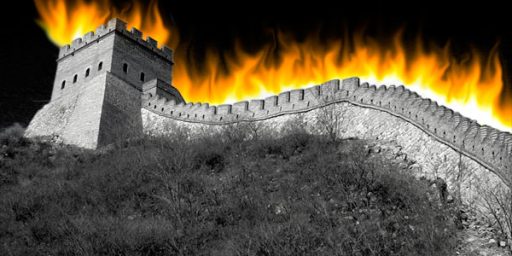 Skype Gets Blocked By The Great Firewall Of China