Meet Colorado Republican Dan Maes, candidate in the GOP Gubernatorial Primary, and apparently not a fan of bicycles:

“This is all very well-disguised, but it will be exposed,” Maes told about 50 supporters who showed up at a campaign rally last week in Centennial.

Maes said in a later interview that he once thought the mayor’s efforts to promote cycling and other environmental initiatives were harmless and well-meaning. Now he realizes “that’s exactly the attitude they want you to have.”

“This is bigger than it looks like on the surface, and it could threaten our personal freedoms,” Maes said.

He added: “These aren’t just warm, fuzzy ideas from the mayor. These are very specific strategies that are dictated to us by this United Nations program that mayors have signed on to.”

Maes said in a later interview that he was referring to Denver’s membership in the International Council for Local Environmental Initiatives, an international association that promotes sustainable development and has attracted the membership of more than 1,200 communities, 600 of which are in the United States.

Denver became a member of the group in 1992, more than a decade before Hickenlooper became mayor. Eric Brown, the mayor’s spokesman, said the city’s contact with ICLEI “is limited.”

Sadly, the most recent primary poll shows Maes with a slight lead over his opponent Scott McInnis, who apparently got caught up in a plagiarism scandal last month. Of course, with Tom Tancredo entering the race as a third-party candidate, the odds of any Republican nominee winning the Colorado Governor’s race have gone down significantly. 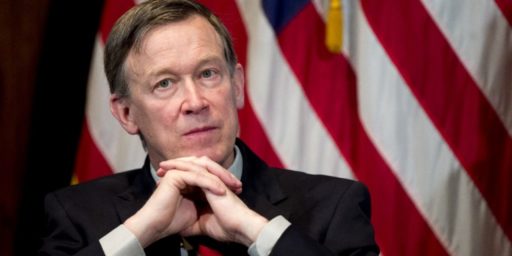