Coming To A Store Near You: Powdered Alcohol 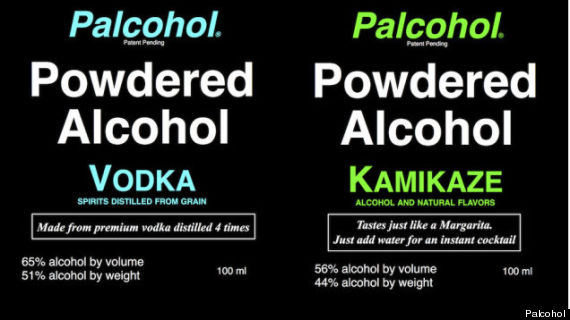 Thanks to a recent decision by the relevant Federal agency, Americans will soon be able to buy powdered alcohol:

American drinkers could find themselves sprinkling their favourite beverage rather than pouring it, as powdered alcohol brand ‘Palcohol’ is now fully approved by the US government.

The Alcohol and Tobacco Tax and Trade Bureau this week signed off on seven versions of Palcohol, including Margarita and Cosmopolitan flavours, which will be made available in autumn of this year.

The company’s website, which has been changed since approval from the TTB, pitched the product as a solution to the ever-escalating cost of liquid alcohol.

“What’s worse than going to a concert, sporting event, etc. and having to pay $10, $15, $20 for a mixed drink with tax and tip. Are you kidding me?! Take Palcohol into the venue and enjoy a mixed drink for a fraction of the cost,” the product’s promotional material read.

The site also suggested that users add Palcohol to their food: “Sprinkle Palcohol on almost any dish and give it an extra kick. Some of our favourites are the Kamikaze in guacamole, Rum on a BBQ sandwich, Cosmo on a salad and Vodka on eggs in the morning to start your day off right. Experiment.

Remember, you have to add Palcohol AFTER a dish is cooked as the alcohol will burn off if you cook with it… and that defeats the whole purpose.”

Perhaps recognising that such a marketing strategy risked causing controversy, and even possible legal issues, Palcohol has removed the copy and issued a clarification: “We were caught off guard with the release of some of our labels by the TTB. As a result, people visited this website that we thought was under the radar because we had not made a formal announcement of Palcohol.

“Clearly, this site isn’t finished. Thus, the verbiage that was copied was still in draft mode and the labels that were up were incorrect. So please disregard what is being printed as a result of information taken from this site.

“What we can say now is that we hope the product will be used in a responsible and legal manner. Being in compliance with all Federal and State laws is very important to us. Palcohol will only be sold through establishments that are licensed to sell liquor.”

Since alcohol remains heavily regulated at the state level, this doesn’t necessarily mean that everyone in the United States will soon be able to put powdered alcohol on their morning pancakes. Some states may attempt to bar the product from being sold at all, for example. At the very least, even with the restriction that this could only be sold in liquor stores (which in Virginia at least would mean only in state run stores), it seems like there’s a huge potential for abuse here both by adults and by those under the age of 21.

As for me, I can’t say that I find anything about this product appealing, and I’m not at all sure what I’d use it for.

No Powdered Alcohol After All