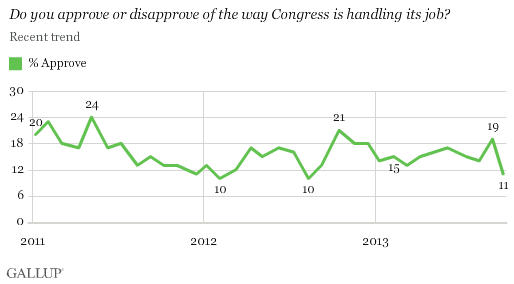 Not surprisingly, public approval of Congress has fallen away in the wake of the ongoing shutdown crisis:

PRINCETON, NJ — As Congress’ inability to agree on compromises that would reopen the partially shut-down government and raise the looming debt ceiling continues, Americans give Congress an 11% job approval rating, down eight percentage points from last month and one point above the worst rating in Gallup history.

And yet, as always, the public seems to be somewhat schizophrenic:

While Congress as a whole gets dismal job approval ratings, Americans are significantly more charitable when it comes to the member of Congress representing their particular district. Americans now give their own representative a 44% approval rating, which is not an extremely high rating on an absolute basis, but is certainly high compared with Congress’ overall 11% rating in the same survey.

Which, of course, is why incumbents continue to get reelected at such astoundingly high rates.