With time seemingly running out, the Senate debate over extending DACA is moving slowly. 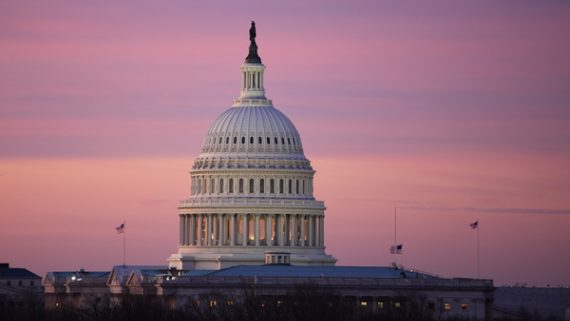 On Monday, the Senate began debate on what for the moment is a bare-bones bill that would serve as the vehicle by which the upper chamber of Congress would debate the DACA issue with the goal of considering amendments from Senators on both sides of the aisle. So far there isn’t any real content in what would become the Senate DACA bill, but it is believed that the proposal that hits the floor initially will resemble the ideas being explored by a bipartisan group of Senators. That plan hasn’t been formally released yet but it would essentially include extension of permanent legal status to DACA beneficiaries and others, borrowing an idea from the White House plan put forward last month, as well as funding for border security although apparently not specifically for President Trump’s wall and not in an amount as high as the White House is requesting. It’s unclear whether the Senate bill would address issues such as the visa lottery and so-called “chain migration,” but it’s likely that amendments covering those issues would be submitted by more conservative Senators if it does not. Whether those amendments would receive sufficient support to be added to the bill is unclear. Yesterday, Senate Majority Leader Mitch McConnell that he hoped to complete the process of suggesting and voting on amendments by the end of this week, but it’s unclear if that’s a realistic goal. Indeed, Politico reported on Tuesday that the entire process in the Senate had hit a snag over disagreements on the procedures under which the bill and amendments would be considered. If those issues are not resolved quickly it could mean a delay in consideration of the bill.

To say that things aren’t looking good so far, though, is something of an understatement:

WASHINGTON — An immigration debate on Tuesday in the Senate that promised to be freewheeling and democratic got off instead to a rocky start, with Democrats and Republicans in a standoff over how the debate should proceed.

But even as the floor debate faltered, a bipartisan group of senators was working behind the scenes to draft an immigration proposal that could garner the 60 votes necessary to overcome a filibuster.

At stake is the fate of hundreds of thousands of young immigrants brought to the country illegally as children, known as Dreamers, who have been shielded from deportation under an Obama-era program, Deferred Action for Childhood Arrivals, or DACA. President Trump has rescinded the program, which is set to expire March 5, and has given lawmakers until then to come up with a replacement.

Senator Mitch McConnell, the Republican leader, had set aside this week for debate on legislation that would protect the young immigrants, and address other matters including border security and the wall that the president has proposed on the southern border. In an early morning Twitter post on Tuesday, Mr. Trump cast the debate as the Dreamers’ “last chance,”and encouraged the two parties to work together.

“Negotiations on DACA have begun,” the president wrote. “Republicans want to make a deal and Democrats say they want to make a deal. Wouldn’t it be great if we could finally, after so many years, solve the DACA puzzle. This will be our last chance, there will never be another opportunity! March 5.”

But in the Capitol, Mr. McConnell and his Democratic counterpart, Senator Chuck Schumer of New York, were unable to come to terms on an agreement that would get the debate underway in earnest.

Mr. McConnell sought to open with a vote on legislation to punish so-called sanctuary cities, which refuse to cooperate with federal immigration officials. But Mr. Schumer objected, on the grounds that such a measure is unrelated to DACA. Without the Democratic leader’s consent, debate cannot begin until midnight Tuesday, or very early Wednesday morning. Republicans were left fuming in frustration.

“This is the debate they said they wanted,” Mr. McConnell, sounding irked, told reporters Tuesday. “I said we’d have an open and fair process. We’re trying to do that, and the sooner we get started, the better because we need to wrap up this week.”

Whether senators can stick to that schedule remains an open question. The chamber is scheduled to be in recess next week, but some lawmakers are urging that the immigration debate be continued after the recess if no resolution is reached by Friday.

“The preference obviously is to finish,” said Senator Jeff Flake, Republican of Arizona. “You never want to have a break right in the middle of a debate. That’s not optimal. But it’s better than letting it die.”

Mr. McConnell has embraced a Republican plan that would meet the president’s conditions. But the proposal, drafted by a group of Republicans led by Senator Charles E. Grassley of Iowa, does not appear to have garnered the backing of 60 senators.

Other proposals are also floating around the Capitol, including a “skinny bill” or “two-pillar bill” that would pair an extension of the DACA program with money for border security. Some Democrats say that is the path most likely to produce a measure that 60 senators can support.

“I’m very optimistic,” said Senator Bill Nelson, Democrat of Florida and a member of the bipartisan group, called the Common Sense Coalition, that has been negotiating behind the scenes. “I think at the end of the day, what it’s going to be is a simple solution. You’re going to take care of the DACA kids and their parents in exchange for doing the wall.”

But Mr. Trump has said he would not sign such a bill, and some senators say they consider the “skinny” approach a waste of time.

Even if the Senate manages to pass a bill, of course, that would only be half the battle. Attention at that point would shift to the House of Representatives where the fate of DACA reform remains utterly uncertain. The Republican Caucus in that body is, of course, more conservative than the Senate GOP Caucus, especially in regard to immigration. Because of this, it’s unclear whether a Senate bill that fails to address issues such as the visa lottery or the “chain migration” issue would have any chance of passing in the House unless the Republican leadership were to allow the bill to get to the floor even without support from a majority of Republicans, meaning that they’d have to rely on Democratic support to get the bill passed. In addition, these same House conservatives have objected to the idea of a path to citizenship for DACA beneficiaries, although it’s not clear if that, or any of the other issues that the Senate bill will likely fail to address would be a dealbreaker.

Overriding everything else, of course, is what the President will accept. Even if the House and Senate are able to resolve their differences about what should be in the bill, it will all be for naught if the White House isn’t on board. Ideally, for example, a final bill would include extending protection for current DACA beneficiaries as well as the additional people that would be covered by the White House’s plan, funding for border security that would include some money that would at least be designated as being for the President’s “wall,” and some kind of compromises on the visa lottery and chain migration issues even if they are temporary ones. Whether or not the President would accept this is unknown, and as we’ve seen on this and other issues, it’s often difficult to pin him down because, as Senate Minority Leader put it, negotiating with this President is like negotiating with Jello. This morning, the President said that he would veto any DACA bill that didn’t meet his demands. While that may just be negotiation talk by the White House, it’s worth keeping mind, especially since the President himself is so difficult to pin down. Given that, the fate of the legislative efforts to help the DACA beneficiaries remains very much up in the air.