Democrats Headed For A Brokered Convention?

The size of the Democratic Presidential field, combined with other things peculiar to the way Democrats pick their nominee, is leading some to wonder if we might see a brokered convention in 2020.

With the entry of New York City Mayor Bill De Blasio into the Presidential race last week, there are now at least 23 candidates running for the Democratic Presidential nomination at this point. Obviously, most of these candidates aren’t going to come anywhere close to winning the nomination. Many of them will be forced to either drop out or dramatically scale back their campaigns in the coming months as sub-par fundraising combines with a lack of support in the polls to make them largely unnoticeable to the voters. As with the 2016 Republican field, though, it’s highly likely that many of these candidates will stay in the race all the way through this year and, quite possibly, all the way to the convention depending on how the primaries go.

As Axios’s Mike Allen notes, though, this could cause problems for the party at the convention:

Why it matters, per Sosnik: “[A]ll these factors … leading up to March 17 [Arizona, Florida, Illinois primaries] are the reasons that we could have the first brokered convention since the political reforms and the advent of the modern presidential primary system that were enacted after the chaotic 1968 convention in Chicago.”

What to watch for: By March 17, 70% of the delegates will have been selected. Sosnik says that’s when we’ll know if the nomination is heading toward conclusion, or a brokered convention.

Jennifer Palmieri, former communications director for President Obama and Hillary Clinton, expects a “long primary … wild ride,” with “fewer barriers to getting in early and staying in late, till at least Super Tuesday.”

Be smart: “That could change,” Palmieri added, “if something unexpected happens and a candidate not seen as viable comes out on top in Iowa and/or New Hampshire, and candidates who are not doing well feel the need to get out to throw support behind a consensus candidate.”

There were, of course, similar fears in 2016 on the Republican side of the aisle given the size of the GOP field and the fact that, at least at the start of the process, everyone seemed to assume that the Trump campaign would inevitably collapse, leaving whatever delegates he won free to support anyone they wanted. As it turned out, of course, Trump’s campaign never collapsed and he ended up winning a sufficient number of delegates to win the nomination rather easily regardless of the opposition against him. All the talk about an effort to deny him the nomination or force a brokered convention ended up being just that, talk, as it was for Republicans in 2012 and for Democrats in 2008.

As I have noted before, though, the situation for Democrats is slightly different than it was for the GOP three years ago when they had a similarly large field of candidates. The main reason for that is the fact that Republicans tend to allocate their delegates on a “winner-take-all” or “winner-takes-most” basis, meaning that the candidate who gets a plurality of the vote ends up getting either all or nearly all of the delegates up in a given state.

The rules are different for Democrats, and that makes the possibility that a candidate can win an early majority of the delegates in a crowded field far less likely. Instead of “winner-take-all” or “winner-takes-most” allocation, Democrats allocate delegates proportionately meaning that even a candidate who comes in third or fourth place in a given primary will get at least a few delegates while the candidate who comes in first will still get most of the delegates but not nearly as many as they would under a “winner take all” or “winner takes most” allocation system. The most immediate result of this is that in a contested primary where there are several candidates behind the frontrunner picking up delegates as the calendar moves forward, it will take longer for someone to rack up a majority than it would under the other allocation methods. It also makes at least the possibility that nobody will have a majority on the first ballot at a convention more likely.

The other thing to take into account here, of course, is the fact that Democrats have significantly changed their rules regarding how superdelegates work. Previously, these delegates, made up primarily of Democratic officeholders and party leaders, were allowed to back specific candidates and to vote on the first ballot at the convention. With the changes that were adopted last year, these delegates remain free to back whoever they wish but they would not be able to vote on the first ballot. This change would not have had a real impact on recent Democratic conventions since recent Democratic nominees — including but not limited to Al Gore, John Kerry, Barack Obama, and Hillary Clinton — all walked into their conventions with a sufficient number of “regular” delegates to win the nomination. Indeed, we have not had a brokered convention in the modern era and the odds of having one now are pretty low. Nonetheless, we’re likely to see speculation about a brokered Milwaukee convention for the Democrats right up until the point where such talk becomes mathematically unnecessary. 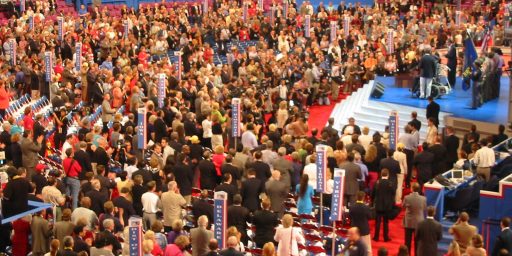