Democrats will consider changing superdelegate rules, but not as much as Bernie Sanders would like. 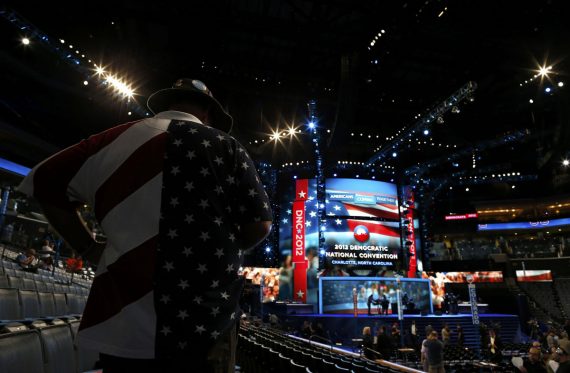 A compromise on the rules committee in advance of the Democratic National Committee would significantly change the role of Superdelegates during the Democratic Presidential primaries and caucuses, thereby addressing one of Bernie Sanders’ chief complaint during the course of the campaign for the Democratic nomination:

PHILADELPHIA — After a lengthy debate and a deal between supporters of Hillary Clinton and Sen. Bernie Sanders, the Democratic Party’s rules committee voted to created a “unity commission” that would dramatically limit the role of convention “superdelegates,” binding roughly two-thirds of them to the results of state primaries and caucuses.

“The Commission shall make specific recommendations providing that Members of Congress, Governors, and distinguished party leaders remain unpledged and free to support their nominee of choice,” reads the new rules language, “but that remaining unpledged delegates be required to cast their vote at the Convention for candidates in proportion to the vote received for each candidate in their state.”

According to the new rules, approved by a vote of 158 to 6, Democrats will appoint a unity commission of 21 members “no later than 60 days” after the general election, chaired by Clinton supporter Jennifer O’Malley Dillon and vice-chaired by Sanders supporter and former Communications Workers of America president Larry Cohen. That commission would report by Jan. 1, 2018, and get a vote on its proposals by the next meeting of the Democratic National Committee, long before the 2020 primaries.

The other guidelines for the commission included a mix of Clinton and Sanders ideas, including expanding “eligible voters’ ability to participate in the caucuses” in caucus states (a gripe of Clinton’s campaign) and encouraging “the involvement in all elections of unaffiliated or new voters who seek to join the Democratic Party through same-day registration and re-registration” (a Sanders demand).

Clinton’s campaign, which held a commanding majority on the committee, did not give up very much ground. If the compromise rule changes had been adopted for the 2016 presidential primaries, Clinton would likely have maintained a lead over Sanders, losing superdelegate support in some states but coming out ahead. While Sanders favored the involvement of independents in primaries, the unity guidelines suggest that independents must join the Democratic Party, if only on Election Day.

The superdelegate reforms, too, fell short of what Sanders wanted. Binding superdelegates to the results of primaries would resolve one of his major complaints, that states like Rhode Island and Oklahoma saw superdelegates flock to Clinton even as he won them handily. But it maintained the power of senators, governors and members of the House to endorse whenever they chose, and for their endorsements to be counted in delegate totals — something Sanders blamed for creating the early impression that he could not win.

When the amendment was produced, supporters of Sanders and Clinton took turns praising it. Former congresswoman Stephanie Herseth Sandlin harked back to the reforms pushed by Democratic nominee George McGovern before the 1972 election. “I have no doubt that our former presidential nominee would be proud of the work we have done today,” she said.

That kumbaya sentiment irked some Sanders supporters. Jon Little, an attorney and Indiana delegate for Sanders, voted agaist the compromise on the theory that Clinton, if elected president, had no reason to stick to it. “George McGovern would puke if he saw this,” said Little.

McGovern’s name is a good one to keep in mind in any discussion of the role of the so-called Superdelegates in the Democratic nomination process, because it was largely in response to McGovern’s ability to use the nomination rules drafted in the wake of the 1968 election to win the nomination in 1972 that the Democratic Party has Superdelegates to begin with. At the time, and over the course of several subsequent election cycles, it was believed that these delegates were needed in part to temper the populism of the primary voters and ensure that the party doesn’t once again select a nominee that is so far outside the mainstream that it leads to the kind of landslide loss that the party experienced in 1972. Indeed, one could argue that Bernie Sanders is exactly the kind of candidate that the Superdelegate system was meant to stop to begin with, which is one of the reasons why Sanders was complaining about Superdelegates virtually from the start of the nomination process. As it turned out, though, Sanders’ complaints turned out to be largely without merit. Looking at the Democratic Delegate Count, for example, we see that Hillary Clinton ended the race with 2,205 pledged delegates, more than 400 more delegates than Bernie Sanders and a number that also constitutes a majority of the 4,051 pledged delegates. While this number alone wasn’t enough by itself to ensure Clinton the nomination, it’s worth noting that this was also true of Barack Obama in 2008 in that he too ended the race with a majority of pledged delegates but still needed some number of Superdelegates to put him over the top. With these numbers at hand, it seems clear that the complaints of some Sanders supporters that the system was somehow ‘rigged’ is largely without merit. Clinton only needed about 180 superdelegates to put her over the top, and that simply isn’t enough to make the claim that these delegates had disproportionate power over the process plausible.

It’s also worth noting that the proposed plan to reform the Superdelegate system, if it passes, would fall short of the demands that Sanders and his supporters have been making, Their demand was essentially that the discretion element would be entirely eliminated for all Superdelegates and that they would be assigned based on the outcome of the primary or caucus in each individual state. If the rules were changed in that manner, then one wonders what the purpose of the Superdelegates would be at all other than to inflate the actual number of delegates a candidate won. Presumably, of course, these Superdelegates would be free to vote their preference on a second ballot, but on a first ballot they would be as bound as the pledged delegates. One immediate result of this, of course, would be virtually guarantee that future contested Democratic primary battles will last until the end of the process in the manner that they did in 2008 and 2016, because it would be unlikely that any one candidate would reach the majority threshold needed to win the nomination before then. The main reason for this, of course, isn’t just the superdelegate rules, but also the fact that all of the Democratic primaries award their delegates on a proportional basis, which is also what would happen to non-elected superdelegates under this proposed rule. Honestly, it would make more sense to change the rule to provide that the candidate who gets the most votes in a given state would get a bonus in the form all the superdelegates from that state on a Winner-Take-All, or at least “winner gets most,” basis. Such a change is unlikely, though, because it goes against the Democratic Party’s odd devotion to mandating proportional assignment of delegates in all contests, a policy that just seems likely to mean that we’ll see more never-ending primary battles like the one that just ended even when its clear that the primary challenger has no chance of winning.