The first estimate of economic growth in the first three months of 2018 beat expectations slightly, but it doesn't bode well for the immediate future. 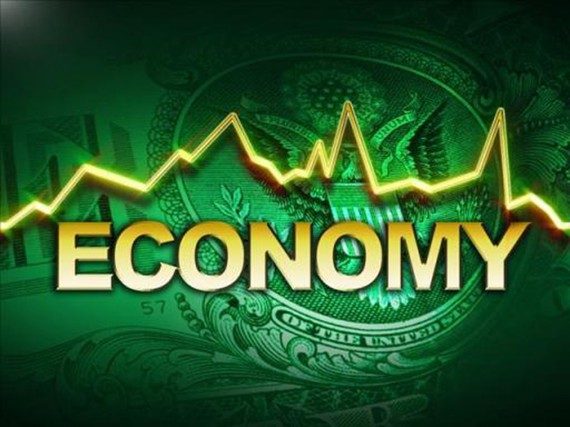 According to the initial estimate of Gross Domestic Product, the U.S economy grew in the first quarter of 2018 but it was largely within the same boundaries we have seen for the past several years, and far below the levels that President Trump and Congressional Republicans have been promising:

Real gross domestic product (GDP) increased at an annual rate of 2.3 percent in the first quarter of 2018 (table 1), according to the “advance” estimate released by the Bureau of Economic Analysis. In the fourth quarter, real GDP increased 2.9 percent.

The Bureau emphasized that the first-quarter advance estimate released today is based on source data that are incomplete or subject to further revision by the source agency (see “Source Data for the Advance Estimate” on page 2). The “second” estimate for the first quarter, based on more complete data, will be released on May 30, 2018.

The deceleration in real GDP growth in the first quarter reflected decelerations in PCE, residential fixed investment, exports, and state and local government spending. These movements were partly offset by an upturn in private inventory investment. Imports, which are a subtraction in the calculation of GDP, decelerated.

While this initial number is slightly above expectations, which called for growth in the neighborhood 2.0% to 2.1%, it is a drop from where economic growth stood in the final quarter of 2017, suggesting a slowdown during the first three months of the year. Among the biggest causes of the decline appears to be a drop in consumer spending growth, which fell to the lowest level it has seen in the past several years at 1.1%. Specifically, the growth rate in goods overall (-1.1%) and in durable goods (-3.3%) specifically actually turned negative for the first time in several years. Consumer spending on services grew by 2.1% but the overall drop in the growth of consumer spending is something of a mystery, especially since the winter was relatively mild and indeed milder for the most part than it had been in the final month of 2017. One possible explanation for this, of course, is that consumers may have been impacted by the declines in the stock market that we’ve seen over the past several months, but given the fact that most Americans exposure to the markets is limited to long-term retirement saving this doesn’t seem like a complete explanation. It’s also notable given the fact that the tax bill passed in December, and the new withholding rules that accompanied it, were supposed to put more cash in the pockets of most Americans.

Looking at other aspects of the numbers, the view of the current economic situation is at best mixed and possibly indicates that we aren’t going to see the strong economic growth that Republicans would like in time for the midterm elections. One potentially positive development lies in the fact that business investment saw a significant increase over the last quarter of 2017. In that quarter, business investment grew by 4.7% while in the first three months of the year it grew by 7.3%, suggesting that business may indeed be investing for future expansion but that it could take some time for that investment to see a payoff in the economy as a whole. On the other hand, spending by state, local, and the Federal government dropped from a 3% growth rate in the last three months of 2017 to 1.2% in the first three months of 2018. Again, this factor could at least partly be explained by the uncertainty created by the budget battles that gripped Washington during January and February and which were not fully resolved until nearly the end of March.

Taking all this together The New York Times makes these observations about the report:

The economy grew at an annual rate of 2.3 percent in the first quarter, the government reported Friday, offering a preliminary glance at how last year’s sweeping package of tax cuts is affecting consumers and businesses this year.

During the first three months of 2018, the economy was whacked around like a pinball. The stock market took investors on a giddy ride. President Trump imposed tariffs on allies and rivals alike, stoking fears of a trade war. And the revamped tax code shifted business incentives and started to put more money in workers’ paychecks.

Still, the economy ended up puttering along just a bit above the average yearly growth rate that it had registered since the recession ended nearly nine years ago.

While the pace is equal to the performance for all of last year, it is below the stronger 2.9 percent annualized rate recorded in the fourth quarter of 2017, and falls short of President Trump’s goal of at least 3 percent. Most forecasters, however, expect quarterly growth to float around the 3 percent mark for the rest of the year.

“This is not too bad,” said Carl R. Tannenbaum, chief economist of Northern Trust in Chicago. “The 2.3 percent figure is moderately encouraging.” Economists had expected economic growth to ease in the quarter.

“The rest of 2018 seems well assured given the substantial support that is going to come from government fiscal policy,” Mr. Tannenbaum said, referring to the $1.5 trillion cost of the tax cuts.

But he said that “longer term, the immediate benefits of tax reform will fade, and what we’ll be left with is the bill.”

Economists on Wall Street and in Washington have repeatedly warned that the economy’s upward streak is unlikely to extend beyond the next year or two. The nation’s debt has topped $21 trillion and is growing, a level many view as unsustainable. And if the Federal Reserve follows through on its plan to raise interest rates, the cost of paying off that debt will grow larger.

Over the longer term, the Fed expects real annual growth in the United States to fall to 1.8 percent. The Congressional Budget Office’s 10-year outlook comes to the same disappointing conclusion.

As a historical measure, it’s worth noting that economic growth for the past year or so has been roughly consistent, and in some cases below, the growth levels we saw in the final years of the Obama Administration:

There are several caveats worth noting here of course. The first is that this is just the initial estimate of economic growth for the first part of the year. We’ll get updates to these numbers a month from now at the end of May and then again at the end of June just as we’re approaching the end of June. It seems unlikely, though, that those revisions will be significantly different from what we’re seeing in this report and it raises the question of whether or not the First Quarter is indicative of the possibility that growth for the year will be below current estimates or not. In that regard, it’s worth noting that we’ve seen before that the first quarter of a given year often lags behind the rest of the year. Typically this is due to weather-related issues and although the winter of early 2018 was mild compared to other years there were some storms that had an impact over large parts of the United States on several occasions throughout the quarter. It’s possible this had an impact on the economy, particularly on consumer spending.

In any case, as things stand so far, we stand far below the economic growth rates that President Trump and the Republicans promised during the election. More importantly, we stand far below the levels that would be required for the rosy forecasts that were used to support the tax bill passed in December. If economic growth ends up falling below those estimates, then tax revenues will end up coming in below estimates as well and the Federal Budget Deficit and National Debt will increase at an even faster pace than they are already projected to grow over the past several years. This increase in deficits will no doubt have an impact on interest rates which, in turn, will have an impact themselves on economic growth. Furthermore, as things stand we are now some nine years into an economic recovery that began in the summer of 2009. The odds of significantly higher growth rates going forward are dim, and the risks of a recession in the next several years are higher than they’ve been in some time.

All of that is in the long-term, though. The more interesting impact of all of this will be in the short term. Republicans are hoping for a measurable positive impact on the economy from the tax cuts to help their chances at the polls in November. If this report is any indication, they aren’t going to get it.