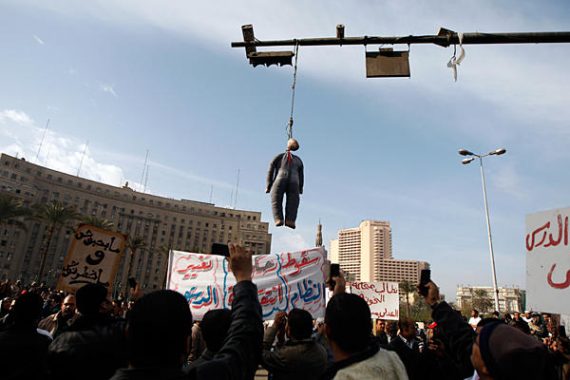 As I write this, reports are coming across Twitter that Hosni Mubarak will announce later today that he will not seek re-election in September but that he will stay in office until then. It’s fairly clear, though, that this won’t be good enough for the opposition, who have said they won’t enter into negotiations regarding the future of the country until Mubarak has stepped down:

A coalition of opposition groups have told Egypt’s government that they would only begin talks with the military on a transition to democracy once president Hosni Mubarak stands down.

Massive protests over the past week have shaken Mubarak’s 30-year grip on power, forcing him to appoint a deputy and new cabinet.

But protesters, emboldened by an army vow not to use force against them, say they will continue until Mubarak quits.

“Our first demand is that Mubarak goes. Only after that can dialogue start with the military establishment on the details of a peaceful transition of power,” said Mohammed al-Beltagi, a former member of parliament from the Muslim Brotherhood.

Beltagi said the opposition was operating under an umbrella group, the National Committee for Following up the People’s Demands, which includes the Brotherhood, the National Association for Change headed by Mohamed El Baradei, political parties and prominent figures including Coptic Christians.

Beltagi’s comments were echoed by El Baradei and another opposition officials.

“There can be dialogue but it has to come after the demands of the people are met and the first of those is that president Mubarak leaves,” El Baradei told Al Arabiya television, saying the dialogue would involve transitional power arrangements.

Given this emphatic statement, it seems very unlikely that Mubarak’s limited concession will placate the protesters at all and that these protests, which filled Tahrir Square in Cairo today with as many as a million protesters, are going to continue.