Employees of the US Federal Government earn substantially more in salary and benefits than their private sector comparables. 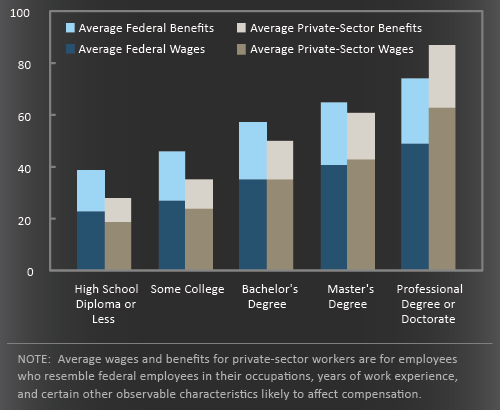 Employees of the US Federal Government earn substantially more in salary and benefits than their private sector comparables, according to the new Congressional Budget Office report “COMPARING THE COMPENSATION OF FEDERAL AND PRIVATE-SECTOR EMPLOYEES.”

Differences in wages between federal employees and similar private-sector employees in the 2005-2010 period varied widely depending on the employees’ level of education.

Overall, the federal government paid 2 percent more in total wages than it would have if average wages had been comparable with those in the private sector, after accounting for certain observable characteristics of workers.

The cost of providing benefits—including health insurance, retirement benefits, and paid vacation—differed more for federal and private-sector employees than wages did, but measuring benefits was also more uncertain.

Differences in total compensation—the sum of wages and benefits—between federal and private-sector employees also varied according to workers’ education level.

Overall, the federal government paid 16 percent more in total compensation than it would have if average compensation had been comparable with that in the private sector, after accounting for certain observable characteristics of workers.

So, overall, federal employees earn only fractionally more than their civilian counterparts in terms of salary but significantly more when benefits are factored in. But the difference is mostly seen at the bottom of the education curve–and actually flips for those with graduate and professional degrees. Note that the survey excludes the uniformed military; otherwise, the skew would be even higher, as junior enlisted personnel make far higher salaries and receive phenomenally better benefits than their high school graduate peers.

Public sector employment is much closer to the progressive ideal than employment in the private sector. For one thing, it’s capped at the upper end. Even the president only makes $400,000 and no civil service employee makes more than the $179,700 ceiling. On the lower end, even the most junior person (a GS-1, Step 1) makes $17,803 a year–roughly $8.55 an hour. Further, the benefits are comparable across the board, so even those at the bottom of the scale get good health coverage, paid vacation, and retirement benefits.

Medical doctors and attorneys who work for the federal government make a decent living and have tremendous protections unavailable in the private sector. But most start as GS-12s making $60,274 a year; an entry level attorney at a top DC law firm makes as much as the president.  Then again, the study likely doesn’t factor in that many of the professionals working for the federal government got a free ride through very expensive schooling.