Thanks to a combination of sensationalism and outright lies, a fairly conventional story about an annual protest march in Mexico was turned into Fox News fodder that raised images of an invading army of illegal immigrants. 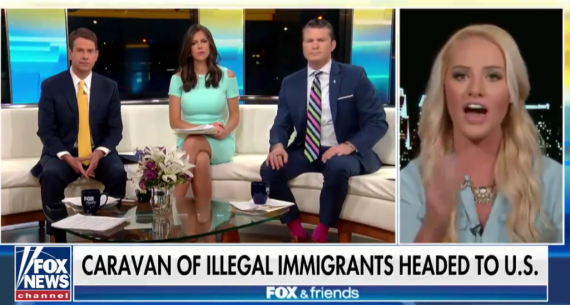 Jeremy Peters of The New York Times has an interesting look at how the story of the “caravan” of Central Ameican refugees became such an obsession on Fox News and on conservative media sites, which in turn led to President Trump’s week-long Twitter tirade and his decision to send troops to the national border:

WASHINGTON — It was the kind of story destined to take a dark turn through the conservative news media and grab President Trump’s attention: A vast horde of migrants was making its way through Mexico toward the United States, and no one was stopping them.

The Gateway Pundit, a website that was most recently in the news for spreading conspiracies about the school shooting in Parkland, Fla., suggested the real reason the migrants were trying to enter the United States was to collect social welfare benefits.

And as the president often does when immigration is at issue, he saw a reason for Americans to be afraid. “Getting more dangerous. ‘Caravans’ coming,” a Twitter post from Mr. Trump read.

The story of “the caravan” followed an arc similar to many events — whether real, embellished or entirely imagined — involving refugees and migrants that have roused intense suspicion and outrage on the right. The coverage tends to play on the fears that hiding among mass groups of immigrants are many criminals, vectors of disease and agents of terror. And often the president, who announced his candidacy by blaming Mexico for sending rapists and drug dealers into the United States, acts as an accelerant to the hysteria.

The sensationalization of this story and others like it seems to serve a common purpose for Mr. Trump and other immigration hard-liners: to highlight the twin dangers of freely roving migrants — especially those from Muslim countries — and lax immigration laws that grant them easy entry into Western nations.

The narrative on the right this week, for example, mostly omitted that many people in the caravan planned to resettle in Mexico, not the United States. And it ignored how many of those who did intend to come here would probably go through the legal process of requesting asylum at a border checkpoint — something miles of new wall and battalions of additional border patrol would not have stopped.

“They end up in schools on Long Island, some of which are MS-13!” declared Brian Kilmeade on the president’s preferred morning news program, “Fox & Friends,” referring to the predominantly Central American gang.

The coverage became so distorted that it prompted a reporter for Breitbart News who covers border migration, Brandon Darby, to push back. “I’m seeing a lot of right media cover this as ‘people coming illegally’ or as ‘illegal aliens.’ That is incorrect,” he wrote on Twitter. “They are coming to a port of entry and requesting refugee status. That is legal.”

In an interview, Mr. Darby said it was regrettable that the relatively routine occurrence of migrant caravans — which organizers rely on as a safety-in-numbers precaution against the violence that can happen along the trek — was being politicized. “The caravan isn’t something that’s a unique event,” he said. “And I think people are looking at it wrong. If you’re upset at the situation, it’s easier to be mad at the migrant than it is to be mad at the political leaders on both sides who won’t change the laws.”

[T]he emotional outpouring from the right has been raw — that was the case on Fox this week when the TV host Tucker Carlson shouted “You hate America!” at an immigrants rights activist after he defended the people marching through Mexico.

The use of disinformation in immigration debates is hardly unique to the United States. Misleading crime statistics, speculation about sinister plots to undermine national sovereignty and Russian propaganda have all played a role in stirring up anti-immigrant sentiment in places like Britain, Germany and Hungary. Some of the more fantastical theories have involved a socialist conspiracy to import left-leaning voters and a scheme by the Hungarian-born Jewish philanthropist George Soros to create a borderless Europe.

Anyone watching Fox News this week would have heard about similar forces at work inside “the caravan.”

“This was an organized plan and deliberate attack on the sovereignty of the United States by a special interest group,” said David Ward, whom the network identified as a former agent for Immigration and Customs Enforcement. “They rallied a bunch of foreign nationals to come north into the United States to test our resolve.”

In many respects, of course, this story was exactly the kind of fodder that sensationalist conservative news outlets like Fox News and blogs such as The Gateway Pundit thrive on. After all, it has all the elements that they thrive on when it comes to pushing panic-filled news stories about immigrants. Brown people? Spanish speakers? Check. Mexicans supposedly not controlling their border? Check. Stories about people fleeing gang violence? Check. And there was even an “army” of people. All of this made the story perfect fodder for the likes of Fox & Friends, which appears to be the inspiration for so many of the President’s early morning Twitter rants over the past year or more, as well as evening hosts such as Tucker Carlson, Laura Ingraham, and Sean Hannity. From there, it was only natural that it was picked up by conservative news sites and blogs that have sensationalized the immigration issue for years now.

The truth, of course, is quite different from what was presented on Fox News. This “army” of immigrants largely consisted of family members, women, and children, many of whom were fleeing political oppression and gang violence and that this “caravan” is another edition of an event that has taken place annually for the past several years and which is meant to draw attention to issues regarding conditions inside countries such as Honduras as well as the asylum issue generally. As noted, this was pointed out even by Brandon Darby, a reporter for Breitbart News who has been covering the story of the caravan. As you might imagine though, Darby’s efforts to point out the truth on his Twitter feed and in his reporting didn’t exactly go over well with the Breitbart commentariat or others on the right who had already decided that this story was their latest whipping boy, and the President dutifully took up the effort on Twitter.

As Peters notes, this is hardly a unique event:

In November, Mr. Trump touched off an international furor when he posted a series of videos on Twitter that purported to show the effects of mass Muslim migration in Europe. Initially circulated by a fringe ultranationalist in Britain who has railed against Islam, the videos included titles like “Muslim migrant beats up Dutch boy on crutches!” “Muslim Destroys a Statue of Virgin Mary!” and “Islamist mob pushes teenage boy off roof and beats him to death!”

The assailant in one video the president shared, however, was not a “Muslim migrant.” And the other two videos depicted four-year-old events with no explanation.

These items tend to metastasize irrespective of the facts, but contain powerful visual elements to which Mr. Trump is known to viscerally respond.

Last February, Mr. Trump insinuated that some kind of terror-related episode involving Muslim immigrants had taken place in Sweden. “Who would believe this? Sweden,” he said at a rally in Florida, leaving Swedes and Americans baffled because nothing out of the ordinary had happened at all. “They took in large numbers. They’re having problems like they never thought possible.”

Like the caravan story, which apparently came to Mr. Trump’s attention as he watched “Fox & Friends,” the president was referring to something he had seen on cable news. And he later had to clarify that he was referring to a Fox News segment on issues Sweden was having with migrants generally, not any particular event.

The conservative National Review later called the piece in question “sensationalistic” and pointed out that a lack of government data made it virtually impossible to determine whether crime rates in the country were related to immigration.

When the president himself has not spread stories about immigration that were either misleading or turned out to be false, his White House aides have. Last year, the White House joined a pile-on by the conservative news media after it called attention to the account of a high school student in Montgomery County, Md., who said she was raped at school by two classmates, one of whom is an undocumented immigrant. The case became a national rallying cry on the right against permissive border policies and so-called sanctuary cities that treat undocumented immigrants more leniently. Fox News broadcast live outside the high school for days.

Prosecutors later dropped the charges after they said the evidence did not substantiate the girl’s claims.

This, of course, is what happens when you have a President who apparently gets his news from Fox & Friends.