After having so much influence in 2010, the Tea Party is finding itself adrift in the search for a Republican nominee in 2012. 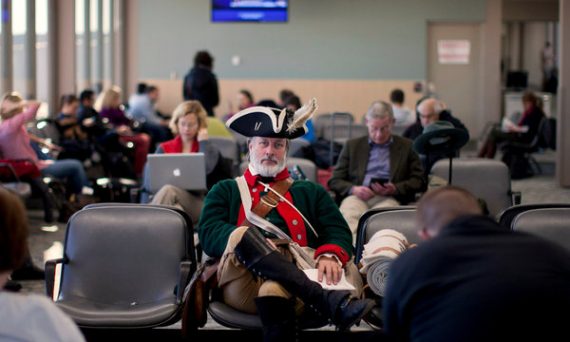 Last week, Conor Friedersdorf observed that the race for the GOP nomination seems to be going badly for the Tea Party Movement:

First Sarah Palin didn’t run, and the documentary about her disappointed at the box office. Then a series of Tea Party friendly candidates jumped into the race. But neither Michele Bachmann nor Rick Perry nor Herman Cain could withstand the scrutiny of a presidential run.

As if to underscore the reversal of fortune, Bachmann, whose star was born with the Tea Party, finished sixth in the Iowa caucuses. And the winner of the first-in-the-nation contest? It was a virtual tie between Mitt Romney, the preferred nominee of moderates in the establishment, and Rick Santorum, arguably the man whose political philosophy is most antithetical to that of Tea Partiers, being the closest to the “compassionate conservatism” of George W. Bush. Now all the candidates not named Romney seem to be fading, save Ron Paul, who has been deemed an unacceptable candidate by the Republican establishment, the religious right, and neocons alike.

What happened to the Tea Party?

Early as it is in primary season, with the GOP race still focused on New Hampshire, and South Carolina after that, there doesn’t seem to be any plausible scenario that will permit the Tea Party to maintain a consistent small government message and play any meaningful role in Election 2012. If Mitt Romney wins, the movement, or the vast majority of those in it, will find themselves supporting a flip-flopping Northeastern moderate who once passed an individual mandate in health care — a calculated compromise with views antithetical to everything Tea Partiers have preached.

As Friedersdorf goes on to point out, the pickings are pretty slim for a Tea Partier from the remainder of the field. Notwithstanding the fact that he has tried to hitch his star to the Tea Party virtually since the time the movement started, Newt Gingrich is clearly not a Tea Partier. Before running for President, he supported an individual mandate for health care, worked to advance the interests of Freddie Mac, urged his fellow Republicans to pass No Child Left Behind and George Bush’s budget-busting Medicare prescription drug benefit, and supported TARP, the last of which has been something of a litmus test for Tea Partiers. If the Tea Party doesn’t like Mitt Romney, it’s hardly likely to see Newt Gingrich as a savior without completely sacrificing its principles.  Ron Paul, meanwhile, carries the fiscal conservatism banner that the Tea Party likes, but his foreign policy positions are likely to alienate as many Tea Party voters as they attract, if not more. Perhaps Rick Perry counts as a Tea Party candidate, but his campaign is on life support at this point and unlikely to be revived.  This leaves the Tea Party left to choose between the moderation of Mitt Romney and the reincarnation of George W. Bush known as Rick Santorum. That’s got to be frustrating.

It gets worse for the movement, though, because the heady days when they were the new things on the political scene are long past and the public has largely turned negative on the movement. A new Rasmussen poll released the day after the New Hampshire primary showed that 46% of likely voters think the Tea Party will hurt the GOP in November. This continues a trend of negative polling for the movement that stretches back to 2010 and suggests that a Presidential candidate with ties to the Tea Party may not fare so well in November, especially among independent voters. Given that, it’s not entirely surprising if candidates for President keep the movement at arms length, adopting their themes in stump speeches to the faithful but eschewing the chance to be closely identified to them.

It’s a big difference from the way things went during the 2010 campaign. Back then, Republican candidates were falling all over themselves to curry favor with the Tea Party movement and it was next-to-impossible for a candidate openly opposed by the movement to make it through a Republican primary unscathed, just as Mike Castle and Lisa Murkowski about that one. Of course, as with any political movement in its infancy they ended up picking more than a few fringe candidates and arguably contributing to losses in states that the GOP probably should have won, such as the Senate races in Delaware and Nevada. It was perhaps because of that bad record of choosing candidates that the Tea Party has lost influence this time around.

One could also point to the movement’s ideological rigidness as a reason for their lack of influence. As we saw during the first year of the 112th Congress, even the slightest hint at compromise is seen by Tea Party members as a betrayal. In reality, of course, compromise is an essential part of governing, though. Instead of governing, though, Tea Party pressure forced the House GOP to go through a month-long ritual of insanity over the debt ceiling, with some members, and indeed the Tea Party movement as a whole, making the rather idiotic suggestion that we didn’t need to raise the debt ceiling at all. Then, just last month, similar behavior saw the GOP find itself on the side of being in favor of a tax increase for the poor and middle class. Apply the same ideological purity test to candidate selection, and it’s really no surprise that that the Tea Party can’t find a candidate to unite behind, even when there are men in the field who, given their record and the policy proposals they have made, would seem to be a pretty good fit with less baggage and a better chance of actually winning a General Election.

In this week’s New York Times Magazine has a long piece exploring what’s happened to Tea Party influence in the Palmetto State, one of the states where it has arguably been the strongest from the beginning and which sent to Congress men like Senator JimDeMint, Congressman Joe Wilson, and Congressman Tim Scott, all of them Tea Party stalwarts. What Bai finds is interesting. While Tea Party activists would tell him how much they disliked Mitt Romney, the opposition to him was diffuse and split among any number of candidates. More importantly, there’s already a sense in the Palmetto State that, like it or not, none of the remaining candidates that might be palatable to the movement have any chance of actually winning the nomination:

In the days after the Iowa vote and just before New Hampshire, as polls showed Romney surging in South Carolina, activists in the state seemed ready to embrace Santorum in hopes of turning the primary into a referendum on Romney, rather than a multiple-choice test with several right answers. “My sense is there will be a very large coalescing of forces around Rick Santorum,” Stephen Brown, a conservative activist and Bachmann supporter, told me on the day his candidate withdrew from the race. “I think he’s going to be the guy.”

When I called Karen Martin, though, she sounded less sure. “I’ve had some e-mails from Tea Party people today saying, ‘Look, can we just put our emotions aside and get behind the candidate who has the best path to victory?’ ” she said. “But I just don’t know if that’s possible.”

I asked her which candidate had the best path to victory. There was a pause on the line.

“And that’s the question,” she finally said.

And that about sums it up. In the end, the Tea Party had little influence over the Republican race because there were no viable candidates to choose from that meet their tests of ideological purity. That strikes me as a reason to re-evaluate the standards by which they judge candidates, assuming the movement actually wishes to remain an influential part of the Republican Party.