Is The PPACA “The Biggest Tax Increase In History?” Not Even Close

In the days since the Supreme Court’s decision in the ObamaCare cases, many Republicans have followed the lead of Rush Limbaugh to claim that, because of the Supreme Court’s decision that the PPACA’s mandate is authorized under Congress’s power to raise taxes for the “General Welfare,” the law is the biggest tax increase in history. As it turns out, and actually not quite surprisingly, that isn’t even close to being true. Politifact was the first organization to take on the claim, rating it “Pants On Fire” inaccurate and providing this list of the actual largest tax increases in history:

As a percent of GDP, here are the top five tax increases from 1940-2006, according to Tempalski:

And the PPACA? Well, here are the numbers:

The list obviously does not include the health care law, which passed in 2010, and a spokeswoman for the Department of Treasury says it hasn’t been updated. So we calculated our own percent of GDP figure. We used 2019 as our baseline because that’s when all of the tax provisions of the law will be in effect. In 2019, the CBO estimates, the government will see increased revenues of $104 billion. We then divided that number into the projected GDP for 2019, which according to the CBO economic forecast is $21.164 trillion. That would mean the tax increase provisions of the health care law would amount to .49 percent of total GDP.

Economist Austin Frakt looked at data going back to 1950 and came up with this chart: 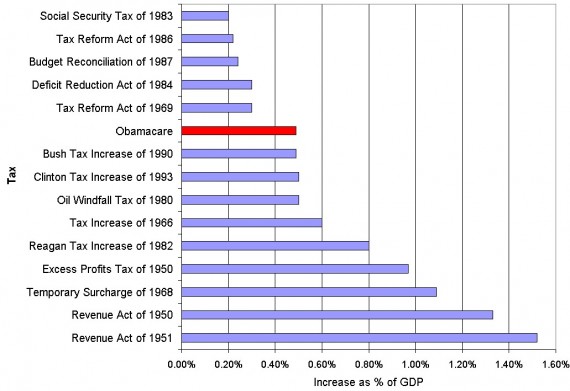 It’s understandable why the GOP would want to associate the PPACA with taxes in the mind of the public now that Chief Justice Roberts has opened the door to that argument. The PPACA itself has been unpopular for some time now, and taxes are even less popular, put the two together and you’ve got a brand new argument to rally the opponents of the law for the election in November. And, hey, everybody likes a politician who says they’ll repeal a tax, right? So, the political position makes sense. It’s too bad they can’t stick to the facts, though.