A new insurance industry survey confirms what anyone who's spent an afternoon driving in metropolitan Washington, D.C. should already know in their heart. 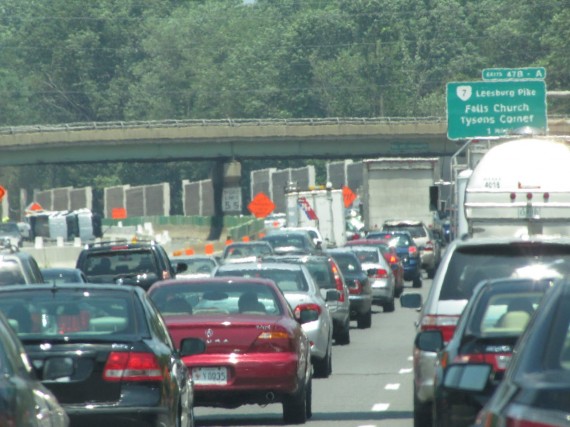 Aaron Morrissey at DCist passes on news that anyone who’s spent more than ten minutes on the roads in the Metro Washington, D.C. area should already know:

Most of the drivers around this region — whether they’re from Maryland, Virginia or the District — just plain suck. This is not new.

But a new report released by Allstate Insurance Corporation indicates that Washington, D.C. is, in fact, the hellish nexus of American traffic. Washington — probably because the city, aside from its own crazy drivers, attracts a nightmarish mish-mash of drivers from two other jurisdictions who also have terrible drivers — finished dead last in the report’s rankings. Some other fun facts from the report: D.C. boasts a 95.5 percent “relative accident likelihood” against the national average and an average of 5.1 years between accidents. (In comparison, the top city on the list, Fort Collins, Colorado, has a negative-31.2 percent accident likelihood and averages 14.5 years between accidents.) Looking for sympathy? Don’t look too far: Baltimore finished but one slot ahead of D.C. in 192nd place. Arlington (174th) and Alexandria (177th) didn’t fare spectacularly either.

You can view the report here, but as James Joyner noted about a month ago, none of this should be surprising:

The city’s infrastructure is woefully inadequate for its population, much less for the thousands of people who commute in from Virginia and Maryland by car each day.   As a result, there’s gridlock, stop-and-go traffic, bottlenecks, and frustration.

DC drivers have reacted to this by adopting an incredibly aggressive style that persists even during those rare occasions when there’s little traffic.   They’ll cut you off without signaling, daring you to run into them, at any moment.  They’ll drive in the wrong lane to get to the head of a queue and then make everybody behind them slam their brakes and wait until they can force their way in.  They’ll block the box during lights, adding to the pile-up and frustration.

Add in a little bit of rain, snow, or even the sun in the sky and it gets even worse.

So, be proud fellow residents of the Washington D.C. area, we’re number one. Or something like that.