The "debt ceiling" is phony, contrived, and needs to be eliminated. 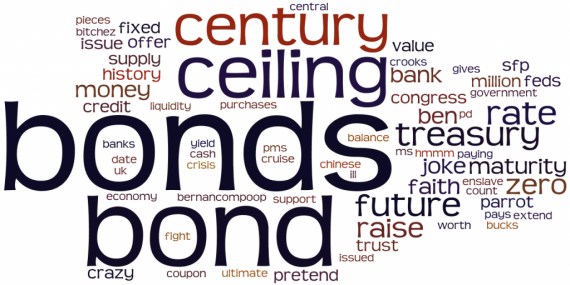 While we prepare ourselves for a month-and-a-half long game of chicken over raising the national debt ceiling, perhaps its time that someone stated the obvious, which is that the very idea of a “debt ceiling” is fundamentally absurd:

The federal debt ceiling is utterly redundant, since Congress already has the sole constitutional power to authorize any federal spending. Even if Congress were concerned about the remote possibility of the Treasury borrowing a lot of cash just for the fun of it and piling it in the White House basement (since there’s no way it can be spent on anything without explicit permission from Congress), there would be ways to prevent that without any debt ceiling — by authorizing the Treasury to issue new debt only as long as the amount of cash on hand does not exceed the current federal budget. The mere fact that the debt ceiling serves no useful function should be more than sufficient reason to repeal it.

But in fact the debt ceiling is not merely useless – it is potentially harmful. It encourages and enables unhelpful grandstanding by politicians. Some of them even live to regret it: our current president recently had to repudiate his own demagoguery from a few years ago when the previous administration was seeking to increase the debt ceiling. So why not just eliminate this generator of public cynicism and embarrassment for politicians? More importantly, the games politicians play with the debt ceiling may one day end up seriously harming the country. And I’m afraid there is a fair chance that day will come quickly. Treasury Secretary Geithner claims that failure to increase the debt ceiling soon may cause a double dip recession, and, unfortunately, he may be right.

Congress already controls the purse-strings, so if Congress would like us to stop borrowing money, then CONGRESS SHOULD STOP F***ING SPENDING MORE MONEY THAN WE TAKE IN. It’s as simple as that. Having this additional, superfluous “debt limit” accomplishes nothing except to give Congresscritters an opportunity for consequence-free political grandstanding. And why wouldn’t they grandstand? There’s no disincentive. The public at large, in all its ignorant glory, fails to demand either spending cuts (except in the abstract) or tax hikes, yet always opposes “raising the debt limit,” even though raising the debt limit is not a policy decision, it’s a math problem — one whose parameters are 100% determined by taxing and spending decisions that are already long made by the time the debt limit “issue” comes up for a vote. But the public doesn’t care about this. The public loves spending and hates revenue, but also hates debt. So of course the politicians grandstand!

George Will said much the same thing back in January when he pointed out that the United States is the only country in the world that does this:

But that’s exactly what the debt ceiling is, a political exercise. There is nothing in the Constitution that requires that such a limit exist and, as noted above, Congress already has all of the necessary power to tax and spend to allow it to control the budget. In fact, there was no law placing a limit on the public debt until 1917, and that law has done absolutely nothing to control federal spending. The “debt limit” does nothing other than given Congressman and Senators an opportunity to grandstand, demagogue, and make long speeches about how bad it is that we’re spending too much.

At the same time, though, it creates the situation that Will notes in the clip above in which the debt ceiling vote brings the government to the very brink of default, spooks the bond markets, and brings the economy to the very edge of the cliff before pulling back. This is the height of fiscal irresponsibility, but it is also, as explained in this late season clip from The West Wing the way Washington has been operating for years:

So, instead of raising the debt ceiling this time around, Congress should eliminate it completely. After that, if Washington wants to avoid increasing the national debt they will actually have to do what the Constitution empowers them to do, take control of the purse strings, and prevent the debt from increasing. Of course, that would require our politicians to behave like adults, and to talk to us like we’re adults. Neither of which is ever going to happen.