Throughout the War On Terror, John McCain stood out as a strong moral voice against the use of torture against prisoners. For that he deserves the thanks of a grateful nation. 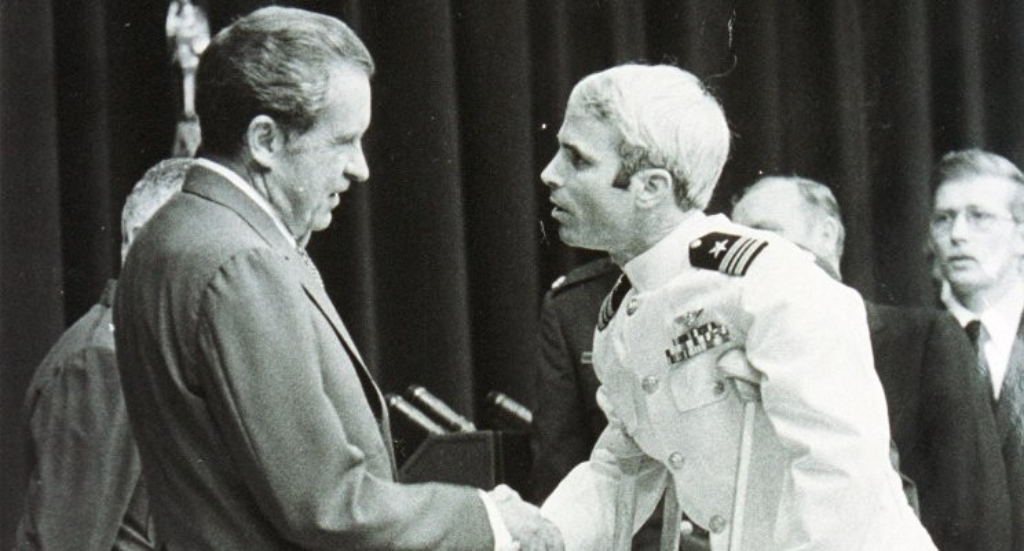 As we ponder the legacy of Senator John McCain it is quite easy to get overly hagiographic and to overlook the flaws that even he would admit he had. From my point of view, for example, McCain’s foreign policy views were far too interventionist and his instincts on issues such as the civil war on Syria and other conflicts around the world were far too likely to get the United States involved in conflicts it didn’t need to be involved in. For others, the late Senator’s positions on immigration, health care, or other issues may have been too liberal or too conservative. Most likely, the Senator would have accepted these criticisms in stride, and he admitted publicly more than once that he as far from a perfect man. There was one issue, though, that the late Senator was uniquely suited to speak on, and it it was one that he bravely stood apart from many members of his own party even in the wake of the worst terrorist attack in American history. I am speaking, of course, about the use of torture and other coercive interrogation techniques, a voice on which he was a consistent and important voice for morality and sanity:

Understanding how McCain suffered as a POW provides a direct lens as to how he became such a strong advocate against the use of torture. Details of that account were taken from an interview he gave with U.S. News shortly after his release from captivity, as well as Robert Tinberg’s book, The Nightingale’s Song, which recounts the Vietnam experiences of five U.S. Naval Academy graduates including McCain.

On Oct. 26, 1967, McCain was part of a 20-plane mission to bomb a power plant in Vietnam’s northern city of Hanoi. But in the midst of the mission, a surface-to-air missile struck his A-4 Skyhawk aircraft, taking off the plane’s right wing and forcing him to eject.

The sheer force of the ejection broke his right leg and both arms, briefly knocking him unconscious before he landed in a small lake. Burdened with heavy equipment, he sank to the bottom and had to kick to the surface for gulps of air.

Eventually, McCain used his teeth to activate his life preserver. But once on the surface, he was pulled ashore by a group of North Vietnamese who proceeded to attack him, tearing at his clothes and slamming a rifle butt into his right shoulder, shattering it. The group also bayoneted McCain in the abdomen and foot.

Over the next few days, he “lapsed from conscious to unconsciousness” while the North Vietnamese interrogated him, he said.

“I refused to give them anything except my name, rank, serial number and date of birth,” McCain told the U.S. News reporter.

His captors initially refused to provide McCain any medical treatment, but that all changed after they discovered that his father was a U.S. Navy admiral. Soon, several high-ranking North Vietnamese officers came to observe McCain in prison, and Vietnamese surgeons operated on his broken leg — damaging several ligaments in the process.

“I was just astounded at his condition,” Day told ABC News in 2008 about McCain’s arrival to the camp. “I took one look at him and mentally said to myself, ‘They’ve dumped this guy on us to die so they can blame it on our neglect.'”

McCain was moved into solitary confinement in March 1968. Several months later, his father was named the commander of all U.S. Pacific forces.

Hoping to capitalize on his father’s promotion, the North Vietnamese offered McCain an early release from prison, but he repeatedly refused, saying he would only accept the offer if every American captured before him was released as well.

“For the next four days, I was beaten every two or three hours by different guards. My left arm was broken again and my ribs were cracked,” McCain said, according to U.S. News.

The North Vietnamese wanted a confession for crimes committed against their people. After four days of torture, McCain, reportedly at the point of suicide, agreed to write a confession.

“I felt just terrible about it,” he told U.S. News, adding, “Every man has his breaking point. I had reached mine.”

Years later, McCain would face critics who alleged that he gave the North Vietnamese information while he was POW, but those accusations have been debunked. On the contrary, McCain has recounted stories of lying to his interrogators under torture, including giving them the names of the Green Bay Packers’ offensive line instead of the names of his own squadron.

McCain said that the treatment he and his fellow POWs received toward the end of 1969 became more tolerable, with his own torture ending around October. He was finally taken out of solitary confinement in March 1970, but would remain in captivity for another three years.

Expanding on this narrative in an Op-Ed in The New York Times, Matt Welch recounts how the experience led McCain to become an outspoken critic of the use of torture:

Mr. McCain, who died Saturday at 81, spent more than a half-century trying to teach us about torture — that it produces faulty intelligence, that “every man has a breaking point,” that military personnel derive a motivational pride from America having higher moral standards than its debased adversaries. “Your last resistance,” he writes in his latest book, “The Restless Wave“ (written as usual with Mark Salter), “the one that sticks, the one that makes the victim superior to the torturer, is the belief that were the positions reversed you wouldn’t treat them as they have treated you.”

That lesson is fading from view in 2018, disregarded both by a president who believes that torture “absolutely works,” and by a #resistance cadre of ex-national security officials whose own brazen lies about the practice have yet to put a noticeable dent in either book sales or cable-TV contracts.

When Osama bin Laden “finally met the fate he deserved, the apologists for torture appeared in numbers on cable news shows and in the newspapers claiming bin Laden wouldn’t have been found without intelligence gained through the use of EITs” — enhanced interrogation techniques, Mr. McCain snarls in “The Restless Wave.” “In truth, most of the C.I.A.’s claims that abusive interrogations of detainees had produced vital leads to help locate Bin Laden were exaggerated, misleading, and in some cases, complete bullshit.”

To his great credit, Mr. McCain did not just make these critiques with seven years’ hindsight, but in real time, when Americans were still high-fiving over Bin Laden’s long-awaited capture. “Ultimately, this is more than a utilitarian debate,” he wrote at the time in The Washington Post. “This is a moral debate. It is about who we are.”

Much of what we know about the country’s post-Sept. 11 use of torture came about because of the Senate Select Committee on Intelligence’s 6,000-page report in 2014 on the C.I.A.’s Detention and Interrogation Program. That document, of which only a 525-page summary has ever been made available to the public, detailed not just a psychotic level of brutality but also a bureaucratic indifference to torture being inflicted on innocents, and a concerted effort at the most senior intelligence levels to lie about their misdeeds to the press and even the president.

Only one Republican on the committee, Susan Collins of Maine, voted to approve it; the rest released a minority report pooh-poohing its conclusions. Mr. McCain’s was a lonely voice of Republican praise. “This report strengthens self-government and ultimately, I believe, America’s security and stature in the world,” he said on the Senate floor. The investigation, he writes in his book, “was as professional as any I’ve observed by a congressional committee.”

As for rot at the top of the intelligence community? In his recent book, Mr. McCain singled out for disdain a series of former C.I.A. directors who these days can be found in high dudgeon about President Trump’s untruthfulness. “George Tenet, Porter Goss, and Michael Hayden misled the White House, Congress, and the director of National Intelligence about the program’s effectiveness,” he writes. They “lied about the value of intelligence extracted from abused detainees.”

Trump-averse Republicans these days are routinely and often justifiably hit with the criticism that they don’t meaningfully oppose the president’s policies or personnel. But one of Mr. McCain’s last acts as senator was to urge his colleagues to vote against Gina Haspel’s nomination to become the C.I.A. director. Her role in “overseeing the use of torture by Americans is disturbing,” he wrote from his sick bed in Arizona. “Her refusal to acknowledge torture’s immorality is disqualifying.”

While one can find much to critique when it came to the political stances that John McCain took throughout his political career, one of his great contributions to American politics and civic life over the past seventeen years that we were fighting the so-called “War on Terror” was the moral voice he brought to the battle against the use of waterboarding and other forms of torture against al Qaeda suspects and others. While there were other voices in Washington speaking out against these practices, and these voices will hopefully continue to push to uncover the truth of what happened when the Bush Administration authorized the C.I.A. to utilize so-called “enhanced interrogation” techniques in their interrogation of terror suspects, none of them had the moral authority or passion on the issue that McCain did, and few of them had as much impact on the debate as he did.

The main reason that McCain had the impact he did on the torture debate, of course, is because there was nobody else in Congress with more moral authority to speak on the issue than he possessed. For nearly the entirety of the five years that he was held as a prisoner of war in what was then North Vietnam, McCain was subjected to inhumane levels of torture reminiscent of the torture inflicted on American and British soldiers by Japanese soldiers during World War Two, conduct that resulted in several top Japanese officials convicted of war crimes after the war was over. More than anyone else, McCain’s voice on this issue stood out as a voice of moral clarity in a time when so many in Washington were otherwise silent and it stands out even more sharply in response to a President who has been quoted as saying he “liked” waterboarding, which McCain himself clearly and correctly identified as torture, and that he believed torture worked notwithstanding the fact there is no evidence that this is the case. Through all of this rhetoric, John McCain stood up and said, no, this is not what America is about, this is not what we do, and this is not how our soldiers and intelligence officers should act. In doing so, he provided a strong moral voice at a time when so many other people either sat on the sidelines and said nothing or supported the idea of the United States utilizing methods of interrogation we once punished as war crimes. For that alone, he deserves the appreciation of a grateful nation.