Justice Alito Won’t Attend Next State Of The Union

Justice Alito said recently he won't be attending the next State of the Union address. Sounds like a good idea to me. 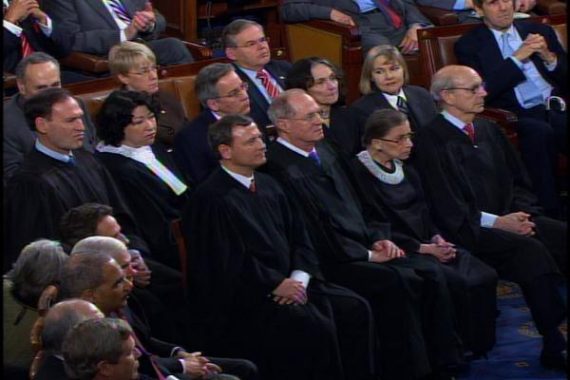 After becoming the focus of a small media firestorm in January for visibly disagreeing with President Obama’s comments about the Citizens United case, Supreme Court Justice Samuel Alito said in a recent interview that he doesn’t intend to appear at future State of the Union addresses:

When Supreme Court justices enter the House of Representatives in their black robes for the president’s next State of the Union address, Samuel Alito does not plan to be among them.

The justice said the annual speech to Congress has become very political and awkward for the justices, who he says are expected to sit “like the proverbial potted plant.”

Alito, answering questions following a speech Wednesday at the conservative Manhattan Institute in New York, also said, “Presidents will fake you out.” The institute provided an online video link to Alito’s talk and question-and-answer session.

The president will begin a sentence with an invocation of the country’s greatness, Alito said. If justices don’t jump up and applaud, “you look very unpatriotic,” he said.

But, Alito continued, then the president may finish the thought by adding “because we’re conducting a surge in Iraq or because we’re enacting health care reform.” Justices aren’t supposed to react to statements about policy or politics.

The better course, Alito said, is to follow the example of more experienced justices like Antonin Scalia, Clarence Thomas and the recently retired John Paul Stevens. None has attended in several years.

Alito isn’t the first sitting Justice to suggest that the Supreme Court’s presence at what is, at it’s core, a political speech perhaps isn’t appropriate, Chief Justice Roberts said much the same thing back in March:

U.S. Supreme Court Chief Justice John Roberts said Tuesday the scene at President Obama’s State of the Union address was “very troubling” and the annual speech has “degenerated to a political pep rally.”

Obama chided the court, with the justices seated before him in their black robes, for its decision on a campaign finance case.

Responding to a University of Alabama law student’s question, Roberts said anyone was free to criticize the court, and some have an obligation to do so because of their positions.

“So I have no problems with that,” he said. “On the other hand, there is the issue of the setting, the circumstances and the decorum.

“The image of having the members of one branch of government standing up, literally surrounding the Supreme Court, cheering and hollering while the court – according the requirements of protocol – has to sit there expressionless, I think is very troubling.”

Roberts and Alito, both have a point, of course.

While the State of the Union has the trappings of a function of state akin to the Queen at the opening of Parliament it is, in reality, nothing more than a political event. There’s nothing in the Constitution that requires the President to actually address Congress, all that Article II, Section III says is this:

For 114 years, from President Jefferson through President Taft, that Constitutional duty was accomplished by the sending of a written address to both Houses of Congress. It was Woodrow Wilson who made the idea of a Presidential address to a Joint Session of Congress a regular part of American political life. Not surprisingly that move was accompanied by an expansion of the power and prestige of the Presidency in American political life that continues to this day. The State of the Union isn’t a vital national event, it’s a political speech designed to enhance the agenda, and power, of the President and his party in Congress. As a co-equal, and ostensibly non-political, branch of government, there’s no reason for the Supreme Court Justices to attend a political speech that protocol demands they not respond to in any way.

In fact, I’d like to see more people follow Justice Alito’s example. Skip the State of the Union, no matter who’s making the speech, it only encourages them if you watch.