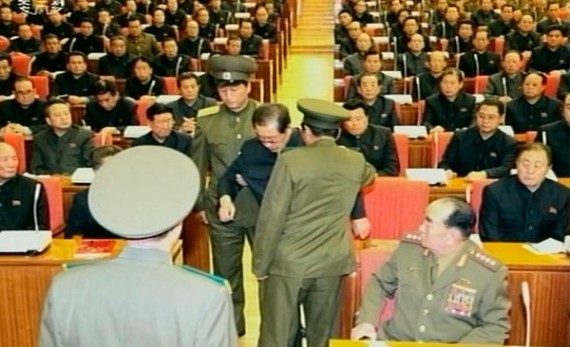 If a report out of a Singapore newspaper is to be believed, the execution of Jang Soong Thaek, uncle to North Korean leader Kim Jong Un, was particularly brutal:

BEIJING — North Korean leader Kim Jong Un’s powerful uncle was stripped naked, thrown into a cage, and eaten alive by a pack of ravenous dogs, according to a newspaper with close ties to China’s ruling Communist Party.

The report could not be independently confirmed by NBC News on Friday.

The official North Korean account on Dec. 12 did not specify how Jang was put to death.

Hong Kong-based pro-Beijing newspaper Wen Wei Po reported that Jang and his five closest aides were set upon by 120 hunting hounds which had been starved for five days.

As noted it’s hard to judge the veracity of this report as it could very well be part of an internal struggle among China’s leadership about how to deal with recent developments in the China’s increasingly bizarre neighbor. If it’s true, though, then it reveals a level of cruelty in Kim that rivals some of the worst dictators in recent history even though it’s hard to feel sorry for Jang given that he was at the right hand of the Kim family for decades as they committed numerous human rights violations in the name of consolidating their dictatorial power.