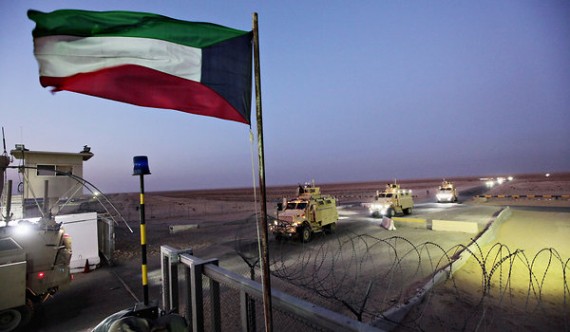 Sometime around 5:00am Eastern time this morning, the final convoy of American troops crossed the border from Iraq to Kuwait:

BAGHDAD — The last convoy of American troops to leave Iraq drove into Kuwait on Sunday morning, marking the end of the nearly nine-year war.

The convoy’s departure, which included about 110 vehicles and 500 soldiers, came three days after the American military folded its flag in a muted ceremony here to celebrate the end of its mission.

In darkness, the convoy snaked out of Contingency Operating Base Adder, near the southern city of Nasiriyah, around 2:30 a.m., and headed toward the border. The departure appeared to be the final moment of a drawn-out withdrawal that included weeks of ceremonies in Baghdad and around Iraq, and included visits by Vice President Joseph R. Biden Jr. and Defense Secretary Leon E. Panetta, as well as a trip to Washington by Prime Minister Nuri Kamal al-Maliki of Iraq.

As dawn approached on Sunday morning, the last trucks began to cross over the border into Kuwait at an outpost lit by floodlights and secured by barbed wire.

“I just can’t wait to call my wife and kids and let them know I am safe,” said Sgt. First Class Rodolfo Ruiz just before his armored vehicle crossed over the border. “I am really feeling it now.”

Shortly after crossing into Kuwait, Sergeant Ruiz told the men in his vehicle: “Hey guys, you made it.”

Then, he ordered the vehicles in his convoy not to flash their lights or honk their horns.

For security reasons, the last soldiers made no time for goodbyes to Iraqis with whom they had become acquainted. To keep details of the final trip secret from insurgents, interpreters for the last unit to leave the base called local tribal sheiks and government leaders on Saturday morning and conveyed that business would go on as usual, not letting on that all the Americans would soon be gone.

Many troops wondered how the Iraqis, whom they had worked closely with and trained over the past year, would react when they awoke on Sunday to find that the remaining American troops on the base had left without saying anything.

“The Iraqis are going to wake up in the morning and nobody will be there,” said a soldier who only identified himself as Specialist Joseph. He said he had immigrated to the United States from Iraq in 2009 and enlisted a year later, and refused to give his full name because he worried for his family’s safety.

So, after 3,196 days, and 4,484 soldiers’  lives (plus 318 deaths among other coalition members), it’s finally over. I shared my thoughts on the end of the Iraq War late last week.