She's quite likely the youngest 4-star general in the U.S. Army, if not the U.S. military. 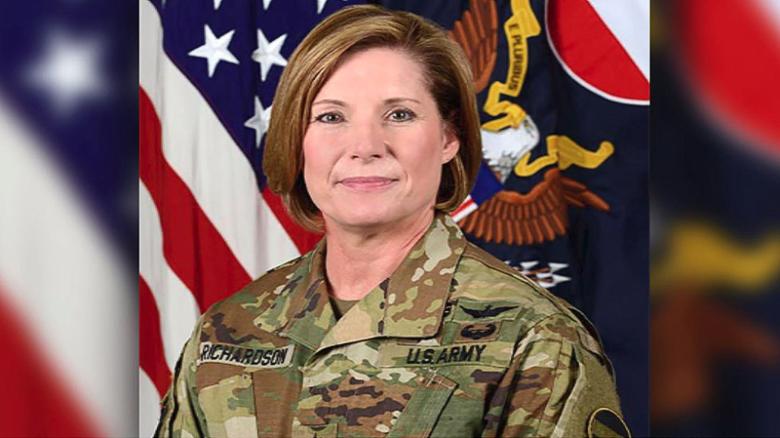 CNN (“For the first time, a woman is leading the largest command in the US Army“):

Lt. Gen. Laura J. Richardson has succeeded in breaking through a few glass ceilings in the US Army. Now she’s set to break a new one.

For the first time in US Army Forces Command, or FORSCOM, history, a woman will be leading the largest command in the Army, representing 776,000 soldiers and 96,000 civilians.

This may be a first for the Army, but Richardson has had other firsts.

She has been with the US Army since 1986, and in 2012 she became the first female deputy commanding general for the 1st Cavalry Division, known as “America’s First Team.”

In 2017, she became second in command to Gen. Robert B. Abrams, when she was named the first female deputy commanding general of FORSCOM in Fort Bragg, North Carolina, the US Army reported.

Now, Richardson will become the first female commanding general of the US Army FORSCOM as Abrams steps down from his post, reported CNN affiliate WTVD.

This is an extraordinary rise. Women have shattered all manner of glass ceilings within the U.S. armed forces just during the years I’ve been blogging here. Ann Dunwoody became the Army’s first woman four-star general back in 2008.   Janet Wolfenbarger became the Air Force’s first woman four-star in 2012. And Michelle Howard became the Navy’s first female four-star admiral in 2013. While Dunwoody and Wolfenbarger were logisticians—in fact, each headed up their service’s Materiel Command—Howard was a line officer, a Surface Warfare Officer. More recently, we’ve had women join the Infantry, graduate Ranger school, and even take command of Infantry units.

The thing that jumped out at me with Richardson is her commissioning date: 1986. Thirty-two years of service is an unusually quick to rise to four-star rank; indeed, I don’t know of any other 1986 Year Group officers who are even three stars. (Yes, the story lists her as a Lieutenant General; she’ll certainly pin on four-star rank with the billet.)

Richardson is, of course, a trailblazer. She and her husband, Jim Richardson, made the cover of TIME back in 2003, as “the first husband and wife battalion commanders in the new married-with-children military.” They were both lieutenant colonels. Fifteen years later, Jim, who was commissioned four years before his wife, is “just” a two-star—but he has been selected for a third star.

Looking at the June general officer assignments list, most of the active duty two-stars (the highest ranking officers on the list) have been in longer than Laura Richardson. Charles A. Flynn, commissioned in 1985. Mark W. Gillette in 1983. Michael “Erik” Kurilla, who just finished his stint as commander of the 82nd Airborne, was my year group. Robert “Pat” White, who just finished his tour as commanding general of the 1st Armored Division, is YG 1986.

What’s odd is that, with the exception of two years as the military aide to Vice President Gore from 1999-2001, during which time she was promoted from major to lieutenant colonel, there’s nothing particularly unusual in her career path. She pinned on major at 10-1/2 years, which was probably a year below the zone. She pinned on lieutenant colonel at 14-1/2 years, which is certainly fast but not extraordinarily so during the height of the Iraq War. And colonel at 20-1/2, while impressive, isn’t extraordinary. I can’t find an official bio beyond her time as a frocked brigadier general (which is to say, she had been selected for promotion, was in a BG billet, but hadn’t yet been officially promoted for purposes of pay) but her Wikipedia page shows she was officially promoted to BG in July 2011, which would be the 24-1/2 mark; about normal. It’s not clear when she made two-star rank but she made lieutenant general in June 2017, at roughly 30-1/2 years of service. That’s quick. Promotion to a fourth star the very next year is unusual but not unprecedented.

Still, it’s odd that she’s moving faster than officers who have held more prestigious commands. She hasn’t had a line command since she had 5th Battalion, 101st Aviation Regiment. Her colonel-level command, United States Army Garrison, Fort Myer, Virginia, is usually a signal that an officer will retire at that rank. She later served as Commanding General, United States Army Operational Test Command and then the Commanding General of Support for 1st Cav. Those aren’t generally held to be as prestigious as line commands. She followed that with a stint as deputy chief of staff, communication for the International Security Assistance Force in Afghanistan and then chief legislative liaison to the Office of the Secretary of the Army. Those aren’t generally fast-track assignments.

Forces Command isn’t one of the more famous assignments a general can get but it’s one that often leads to bigger and better things. The outgoing commander, Robert Abrams, is headed off to command US Forces Korea. His predecessor, Mark Milley, is the current Army Chief of Staff—the top post in the service. His predecessor, Daniel Allen, went on to be Vice Chief of Staff. Indeed, pretty much all of the recent past commanders went on to a subsequent higher command or staff billet: David Rodriguez went on to command AFRICOM; James Thurman, Korea;   Dan McNeil, ISAF/Afghanistan; Only Charles Campbell (2007-10) and Larry Ellis (2001-4) retired from that post in the post-9/11 period. Going back quite a bit further, Colin Powell punched his four-star ticket there briefly before becoming Chairman of the Joint Chiefs.

It wouldn’t be shocking at all, then, for Richardson, who still has eight years left on the clock before mandatory retirement, to go on make more history. The first woman service chief is a real possibility.