A true legend in legal journalism is moving on. 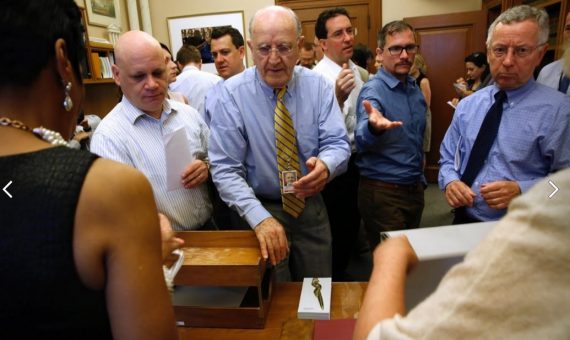 For more than ten years now, American lawyers and others who closely follow the Supreme Court have been fortunate to have access both to SCOTUSBlog, the unique and comprehensive blog covering everything about the U.S. Supreme Court from tracking petitions asking the Justices to grant a losing party below the opportunity to make their case one last time all the way to the often dramatic day when decisions are handed down. Through it all, in addition to the stellar work that creators Tom Goldstein and Amy Howe have put into the site, assisted now by so many others, the site has relied on the insights and hard work of Lyle Denniston, who has become a star in his own right thanks to both the insights he’s provided in his analysis of oral argument and Court decisions, and the crucial role he’s played as the SCOTUSBlog contact in the press pool who has quite often been the first to report on some of the most consequential decisions of the past decade thanks to his role in the live blogging that SCOTUSBlog does on Court decision days. The picture above, appropriately enough, shows Denniston at the front of the line waiting for the next opinion on some unnamed decision day earlier this year.

Now, through a post from Denniston, comes word that his time at SCOTUSBlog is coming to an end:

So much of the rhythm of my life, and that of my family, has been dictated for more than a half-century by the Supreme Court’s calendar.  And so it is with the completion this coming week of the Court’s most recent Term.  With one more live blog, and some picking up of loose ends, my journey with SCOTUSblog ends.

It has been a fabulous trip, since February 2004, when my then-latest attempt at retirement proved — as usual — to be premature.  In those twelve-plus years, SCOTUSblog has become a standout in legal journalism, more than fulfilling the creative dream that Tom Goldstein and Amy Howe had when they started it before I logged on with them.

The blog has provided a rich education for me in the Digital World; that realm now is as comfortable for me as were my years with a standup typewriter and moveable type.  It is a whole lot faster, though, and my keeping up with the pace probably has more than anything to do with the old days at The Washington Star, when I picked up the phone on decision days at the Court and dictated stories — in final news form — moments after the rulings came down, with an 11:15 deadline for immediate publication.

One thing that I noticed early about digital journalism, and still sense very strongly, is that it truly is a part of a community, one where competition still is lively but cooperation and sharing actually work to enrich everybody’s stories.  My years at the blog would have been a failure had it not been for the legions of people who have been so eager to send me story ideas, react to what I do, correct my errors, and — overall — put me in the center of something that others have called ”#waitingforlyle.”

The blog has also taught me that serious journalism still has a very large place amid the babbling noises of the Internet.  I have but one regret, and it is that I was unable to persuade the traditional journalists who control the credentialing for Congress that I was as independent as they feel they are, and that journalism can take unusual new forms and still be journalism.

I shall miss, very much, the close comradeship of my colleagues at SCOTUSblog, present and past, and I hope for those who continue, many, many years of success in telling the story of the Court to an ever-expanding audience.  Rachel Maddow of MSNBC once described SCOTUSblog as a “national treasure,” and she was close to the mark.

Denniston has been covering the Supreme Court since the beginning of the Warren Court era, meaning that he has been witness to some of the most momentous arguments Supreme Court decisions in American history. During that time, he’s worked for Denniston has been covering the publications such as the The Wall Street Journal, Boston Globe, The Baltimore Sun, The American Lawyer, and the now defunct Washington Star. He has also been a frequent panelist at conferences on the Court and legal issues around the country. He has been given the title ”Dean Emeritus of the Supreme Court Press Corps” and has the singular distinction of being memorialized by a plaque in the Supreme Court’s Press Room. Given the fact that he continues to work even at the age of 86, it will probably come as no surprise that moving on from SCOTUSBlog doesn’t mean that he’ll be retiring. Instead, he’ll be covering the Court for Constitution Daily, the blog of the National Constitution Center in Philadelphia. So, while those of us who follow the Court with a level of interest similar to that with which others play Fantasy Football or cover the NFL Draft will miss him at SCOTUSBlog — no more #waitingforLyle, guys — it’s good to know that he’ll still be sharing the insight that can only come from being one of the few reporters who have covered the Supreme Court for more than 0ne-fifth of the years it has actually existed.

There’s no word as of yet how SCOTUSBlog will fill the hole that Denniston’s departure will leave, not just in the analysis he provides but also in the fact that he was the blog’s means of access to the Supreme Court press room, something which made their live blog possible. Over the years, the blog itself has tried to apply for its own press pass, only to be denied by the committee of reporters that awards credentials. At one point, even Denniston’s own credentials were seemingly under threat due to his association with the blog, but that issue seems to have resolved itself thanks largely to thefact that Denniston alread had a Supreme Court Press Pass due to his associations with other news outlet and long tenure in the press office. It’s unclear, though, how the blog will get around the press pass issue this time. Hopefully, with Monday likely being the final decision day of the term that began in October 2015, we’ll hear something about that soon. As I’ve said before, SCOTUSBlog is a national treasure and a great place for the non-lawyer public to learn more about the most opaque branch of the Federal Government.

In any case, good luck to Lyle on his new venture. Those of us who hang out on the live blog on decision day mornings will miss you.