More conflicts of interest for the Trump Administration.

Retired Lt. General Michael Flynn, who served briefly as President Trump’s National Security Adviser until being dismissed after it was revealed that he had lied to the transition team and to Vice-President Mike Pence about his contact with Russia’s Ambassador to the United States after the election, was a paid agent for Turkey while working on the Trump campaign:

WASHINGTON — The candidate he was advising last fall was running on a platform of America First. The client he was working for last fall was paying him more than $500,000 to put Turkey first.

Michael T. Flynn, who went from the campaign trail to the White House as President Trump’s first national security adviser, filed papers this week acknowledging that he worked as a foreign agent last year representing the interests of the Turkish government in a dispute with the United States.

His surprising admission, coming more than four months after the election, raised further questions about the rise and fall of a presidential confidant who was forced to resign after 24 days in office for withholding the full story of his communications with Russia’s ambassador. Even now, out of government and out of favor, Mr. Flynn and his contact with foreign figures presented a new headache for a White House eager to move on.

Mr. Flynn, a retired Army lieutenant general, registered as a lobbyist last year but did not file papers with the Justice Department registering as a foreign agent, providing a fuller understanding of his role, until Tuesday. While he did not work directly for the Turkish government, the firm that hired him, Inovo, is owned by a Turkish-American businessman with links to leaders in Ankara and asked him to work on an issue important to the government.

The White House said that Mr. Trump did not know that Mr. Flynn was acting as a foreign agent when Mr. Trump appointed him national security adviser, a position that gave him access to classified meetings and materials. But a person briefed on the matter, who insisted on anonymity to describe private conversations, said Mr. Flynn’s lawyer contacted a lawyer for Mr. Trump’s transition team before the inauguration to ask whether Mr. Flynn should register given his work for Inovo.

The transition lawyer offered no advice, saying it was up to Mr. Flynn. After the inauguration, the person said, Mr. Flynn and his lawyer each raised it again with a White House lawyer, only to be told once more it was up to him. Mr. Flynn had no comment on Friday. His lawyer wrote the Justice Department that Mr. Flynn decided to register retroactively “to eliminate any potential doubt.”

The White House said its lawyer considered it a private decision and saw no reason to intervene. “It’s not a question of raising a red flag,” said Sean Spicer, the White House press secretary. “It’s a question of whether or not they gave him the advice that they are supposed to, which is it is not up to them to make decisions as to what you need to do or not do.”

Vice President Mike Pence, who was upset that Mr. Flynn had misled him about the conversation with the Russian ambassador that got him dismissed, seemed less forgiving. News reports on the matter were “the first I heard of it,” the vice president said during an interview on Fox News Thursday night, “and I think it is an affirmation of the president’s decision to ask General Flynn to resign.”

Throughout the campaign, Mr. Flynn positioned himself as someone willing to call out a national security establishment that was too corrupt to keep America safe. When former colleagues criticized him for becoming overtly partisan, he shot back by castigating them for using their titles to enrich themselves by joining corporate boards.

In an interview in October, Mr. Flynn insisted that he had eschewed financial rewards to follow his political convictions and join the Trump campaign. “I would love to be making some money,” he said. “I wish I could stop what I’m doing.”

On behalf of his firm, the Flynn Intel Group, Mr. Flynn signed a contract on Aug. 9 with Inovo, a Dutch firm owned by Ekim Alptekin, the chairman of the Turkish-American Business Council. Mr. Flynn’s firm was to receive $600,000 for 90 days of work. His initial registration as a lobbyist last year indicated he would receive less than $5,000 for lobbying, although that presumably indicates that he did not define most of the services he would provide Mr. Alptekin as lobbying under the law.

Mr. Alptekin has links to the government of Turkey’s president, Recep Tayyip Erdogan, which has engaged in a political crackdown after surviving a military coup attempt in July. In documents disclosed by the anti-secrecy group WikiLeaks, Mr. Alptekin emailed frequently with Egemen Bagis, the former Turkish minister for European Union affairs. In one email in 2013, Mr. Alptekin sent an article from The Wall Street Journal to Mr. Bagis, who then forwarded it to Berat Albayrak, Mr. Erdogan’s son-in-law and now the country’s energy minister.

Mr. Flynn was assigned to investigate Fethullah Gulen, a Turkish cleric who lives in Pennsylvania and was blamed by Mr. Erdogan for helping instigate the failed coup. Mr. Erdogan has demanded the United States extradite Mr. Gulen, which the Obama administration refused to do.

The forms filed this week indicate that Mr. Flynn’s firm was “to perform investigative research” on Mr. Gulen and “develop a short film piece on the results of its investigation.” In the end, the video was never completed, and Mr. Flynn’s firm received $530,000 before the contract terminated in November. But on Election Day, Mr. Flynn published an op-ed article in The Hill, a newspaper serving Congress, calling Mr. Gulen “a shady Islamic mullah” and “radical Islamist.”

There are really two points here that I think are important.

The first, of course, is the fact that someone who was serving as perhaps the most influential national security adviser to then-candidate Donald Trump during the campaign was a effectively a lobbyist for a foreign government at the same time he was working on the campaign, something the campaign was apparently entirely unaware of. Later, he was appointed to be the President-Elect’s National Security Adviser even though the President remained unaware of the fact that he had been engaged in such work on the side, largely because Flynn failed to disclose it. That failure to disclose extended not only to the President-Elect but also appears to have violated the law since neither Flynn nor the firm he heads filed the paperwork that is required under Federal Law for anyone who undertakes work for any foreign government whether friend or foe. That someone who might have double loyalties being that close to the President and having the kind of influence over the direction of foreign policy as the National Security Adviser typically does is particularly concerning. The fact that the President was never even aware of this is even more concerning and, perhaps, a rather telling indication of how things operate inside the Trump White House.

The second major concern, of course, is the fact that at some point Flynn and/or his attorneys contacted someone on the transition team and asked them about the legal issues surrounding Flynn’s representation of Turkey. Instead of responding or passing the revelation up the chain of command, whoever they spoke with told them that they needed to handle the matter themselves. This means that the President was apparently unaware that the person he was appointing as National Security Adviser had been a lobbyist for a foreign government. The fact that Turkey is a NATO ally is irrelevant to the point, of course, especially since the United States has frequently butted heads with the Erdogan government in the past over Syria policy, the war against ISIS, and other issues. At the very least, this is something the President-Elect should have known and, again, the fact that he didn’t know about it tells us a lot about how things are being run inside the White House, none of it very good. It’s also worth noting that, but for the fact that Flynn’s contacts with the Russians and lies to the transition team and Vice-President became public, he would still be in the White House serving as National Security Adviser notwithstanding his potential dual loyalty. This is the kind of thing that happens when the White House is run by a group of hapless amateurs. 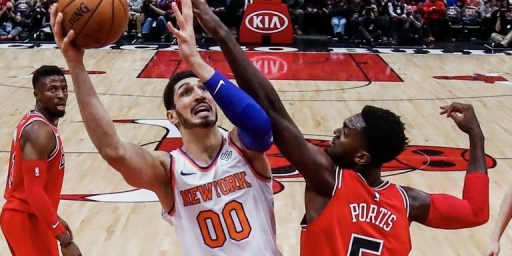