Moody's is on the right track. The current debt ceiling law has done more harm than good.

As Steven Taylor noted earlier today, Moody’s recommended today that the United States should just get rid of the debt ceiling entirely:

Ratings agency Moody’s on Monday suggested the United States should eliminate its statutory limit on government debt to reduce uncertainty among bond holders.

The United States is one of the few countries where Congress sets a ceiling on government debt, which creates “periodic uncertainty” over the government’s ability to meet its obligations, Moody’s said in a report.

“We would reduce our assessment of event risk if the government changed its framework for managing government debt to lessen or eliminate that uncertainty,” Moody’s analyst Steven Hess wrote in the report.

The agency last week warned it would cut the United States’ AAA credit rating if the government misses debt payments, increasing pressure on Republicans and the White House to come up with a budget agreement.

Moody’s said it had always considered the risk of a U.S. debt default very low because Congress has regularly raised the debt ceiling during many decades, usually without controversy.

However, the current wide divisions between the House of Representatives and the Obama administration over the debt limit creates a high level of uncertainty and causes us to raise our assessment of event risk,” Hess said.

Not surprisingly, this recommendation is already generating commentary, both good and bad. Over at Commentary, Jonathan Tobin concludes a post titled “There’s A Reason We Have A Debt Ceiling” with this observation:

As Senator Marco Rubio said yesterday on CBS’s “Face the Nation”: “The debt limit is not really the problem here, the problem is the debt.” So long as Congress has something to say about that limit and can use the power of a deadline to create an opening for reach change, the nation will be forced to deal with the debt.

Oh really? Even a cursory glance at the history of the debt ceiling from 1917 to present has shown that it really does nothing to force the nation to “deal with the debt.” Instead it’s been a method by which Congress has been able to demagogue on the debt issue, pretend that it is acting responsibly, but in reality do absolutely nothing. If Members of Congress, and their constituents, truly wanted to constrain Federal spending and the growth of government then Article I of the Constitution already gives it all the power and authority it needs to accomplish that goal. The reason the national debt has increased isn’t because Congress kept increasing the debt ceiling, it’s because Congress kept spending more than we took in. The only way we’re going to get the debt under control is to stop doing that, and there’s nothing about a debt ceiling law that helps accomplish that.

The fact that debt ceiling has done nothing to stop the growth of the National Debt really shouldn’t be a surprise, because that’s basically what it is intended to do:

Judging from the NY Times coverage of the 1917 episode, legislators paid little attention to the implications of mandating a ceiling.  They focused instead on Treasury Secretary McAdoo’s request for a higher borrowing limit so as to fund an expensive war effort.  The ceiling was created to empower, not rein in, Treasury (prompting a failed effort to create a congressional  committee to oversee Treasury’s actions).  Similarly, the creation of the aggregate ceiling in 1939 reflected congressional deference to Treasury, granting the department flexibility in refinancing short term notes with longer term bonds.  As the Senate floor debate makes clear, senators viewed the move as removing a partition in the law that hampered Treasury’s ability to manage the debt.

In other words, the debt ceiling law was intended to take the issue of the issuance of Federal Debt out of the hands of Congress, and place it in the hands of the Treasury Department in order to make it easier for the Federal Government to issue debt. In the context of the times, debt was being incurred in order to finance World War One. After that, it was used to finance public works, public assistance during the Great Depression, and of course everything else the Federal Government has spent money on for the past century. Congress did nothing to change the debt ceiling law during this time, and it’s easy to see why they didn’t. Because putting the authority to issue debt fully in the hands of the Executive Branch makes it easier for Congress to authorize new spending without having to worry about where the money to pay for it will come from. Why would we want to continue with a system that has created the very problem we say today we want to solve?

As an alternative, Moody’s suggests the United States look to how other countries handle their debt issues:

Stepping further into the heated political debate about U.S. debt problems, Moody’s suggested the government could look at other ways to limit debt.

It cited Chile, widely praised as Latin America’s most fiscally-sound country, as an example.

“Elsewhere, the level of deficits is constrained by a ‘fiscal rule,’ which means the rise in debt is constrained though not technically limited,” Moody’s said, adding that such rule has been effective in Chile.

It also cited the example of the Maastricht criteria in Europe, which determines that the ratio of government debt to GDP should not exceed 60 percent. It noted, however, that such a rule is often breached by the governments.

No system is going to be perfect, of course, unless legislators and citizens want it to be, but our method of control the debt is 94 years old, and its record is eminently clear: 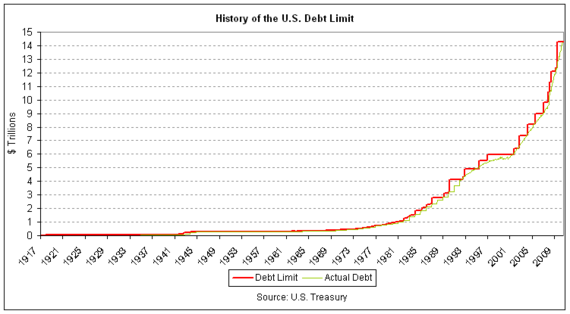