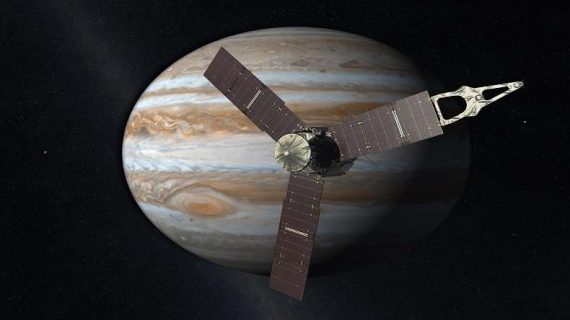 After a five year journey, NASA’s latest interplanetary probe has arrived at Jupiter where scientists hope it will provide more insights into the Solar System’s largest planet than we’ve been able to glean before:

Ducking through intense belts of violent radiation as it skimmed over the clouds of Jupiter at 130,000 miles per hour, NASA’s Juno spacecraft on Monday clinched its spot around the solar system’s largest planet.

It took five years for Juno to travel this far on its $1.1 billion mission, and the moment was one that NASA scientists and space enthusiasts had eagerly — and anxiously — anticipated.

At 11:53 p.m., Eastern time, a signal from the spacecraft announced the end of a 35-minute engine burn that left it in the grip of its desired orbit around Jupiter. Cheers and clapping erupted at the mission operations center at NASA’s Jet Propulsion Laboratory, in Pasadena, Calif., which is managing Juno.

“This is the hardest thing NASA has ever done,” Scott Bolton, Juno’s principal investigator, told the mission team a few minutes later. “That’s my claim.”

Status messages for each maneuver of the spacecraft came in as expected. The length of the engine firing turned out to be within one second of what had been predicted.

Diane Brown, the program executive for Juno at NASA headquarters, described the performance as flawless.

“To know we can all go to bed tonight, not worrying about what’s going to happen tomorrow, it’s pretty awesome,” she said at a news conference.

Rick Nybakken, Juno’s project manager, held up a sheaf of papers as he celebrated the smooth execution of the maneuver.

“We prepared a contingency communications procedure, and guess what?” he said, ripping the papers. “We don’t need that anymore.”

Juno is just the second spacecraft to enter orbit around Jupiter. NASA’sGalileo spacecraft spent eight years there surveying the planet and its many moons. But except for a probe that parachuted into Jupiter’s atmosphere, Galileo did not have the tools that Juno does to delve into what lies beneath Jupiter’s clouds.

“We have a chance with Juno to go back and study the planet in its own right,” James L. Green, the director of planetary science at NASA, said during a news conference earlier on Monday.

Jupiter, most likely the first planet formed after the sun, is believed to hold the keys to understanding the origins of our solar system. How much water it contains and the possible presence of a rocky core could reveal where in the solar system Jupiter was created and provide clues to the early days of other planets.

Juno’s instruments are designed to precisely measure the magnetic and gravitational fields of Jupiter and the glow of microwaves emanating from within. That, for instance, will give hints about storm systems like the visible Great Red Spot, which has persisted for centuries, although it has been shrinking.

“Juno is really searching for some hints about our beginnings, how everything started,” Dr. Bolton said. “But these secrets are pretty well guarded by Jupiter.”

Ensnared by Jupiter’s gravity, Juno accelerated quickly to its rendezvous with the planet, passing within the orbit of Callisto and Ganymede, two of the main moons, on Sunday. It zoomed past the other two, Europa and Io, on Monday.

Juno has been on its own since Thursday, performing a programmed sequence of actions.

Around 10:30 p.m. on Monday, Juno passed over Jupiter’s north pole and through a region that Heidi Becker, the leader of Juno’s radiation monitoring team, described as “the scariest part of the scariest place.” In this belt of radiation, electrons bouncing back and forth at nearly the speed of light could have knocked out the computer and other electronics.

“They will go right through a spacecraft and strip the atoms apart inside your electronics and fry your brain if you don’t do anything about it,” Dr. Becker said.

But a titanium vault built for Juno proved up to the task of shielding its crucial systems.

As New York Times Science report Kenneth Chang puts it, scientists are hoping that Juno reveals much not only about the mysteries of Jupiter itself, but also the role Jupiter played in the formation of the rest of the Solar System:

On Tuesday, hours after arriving on Jupiter, NASA’s Juno spacecraft had already been flung by the planet’s immense gravity onto the outward leg of its orbit.

That was the plan, of course. The spacecraft arrived on Monday night, diving through intense barrages of radiation and reaching 130,000 miles per hour as it passed 2,900 miles above Jupiter’s cloud tops.

Juno fired its main engine for 35 minutes, slowing it down just enough to be captured by Jupiter’s gravity.

“Everything executed just like we designed it to,” Rick Nybakken, Juno’s project manager, said in an interview. “It’s doing very well.”

As the spacecraft sped around Jupiter, the team at NASA spent much of Tuesday eliminating its wobbles.

By design, Juno cartwheels as it flies, which helps stabilize the spacecraft. The firing of the main engine can induce slight wobbles because of fuel left in the tanks.

The mission controllers can compensate by adjusting the positions of Juno’s three 30-foot-long solar panels, much as a skater can adjust her spinning speed by pulling in her arms or extending them.

Once the realignment is complete, the spacecraft will resume communications via its main antenna.

This brief lull gives scientists and engineers time to catch their breath after Juno’s suspenseful but flawless arrival and before work begins to peer deep inside Jupiter.

Mission scientists will be looking for clues that might tell how the planets came together in the early history of the solar system.

“It’s the gateway to being that much closer to getting this really tantalizing science data,” Mr. Nybakken said.

The mission controllers can compensate by adjusting the positions of Juno’s three 30-foot-long solar panels, much as a skater can adjust her spinning speed by pulling in her arms or extending them.

Once the realignment is complete, the spacecraft will resume communications via its main antenna.

This brief lull gives scientists and engineers time to catch their breath after Juno’s suspenseful but flawless arrival and before work begins to peer deep inside Jupiter.

Mission scientists will be looking for clues that might tell how the planets came together in the early history of the solar system.

“It’s the gateway to being that much closer to getting this really tantalizing science data,” Mr. Nybakken said.

It took five years for Juno to travel this far on its $1.1 billion mission, and the spacecraft is to make 37 orbits around Jupiter over the next 20 months. The science instruments, which were turned off for the arrival, will be restarted on Thursday.

Juno will spend the next two years orbiting Jupiter and taking various measurements of the gas giant and its numerous moons. Among the things that scientists are looking forward to are passes through the planet’s magnetic field that will attempt to confirm whether or not there is in fact a rocky, solid core somewhere beneath all of the hydrogen, helium, and other gases that make up Jupiter’s atmosphere. Additionally, measurements of the planet’s gravitational field are intended to help in understanding the role that the planet has played in the formation of the Solar System. Specifically, it has been theorized for some time that Jupiter’s presence in the Solar System helped to protect the inner planets — Mercury, Venus, Earth, and Mars — from many of the comet and asteroid strikes that would have plagued them over the four billion years since the Solar System began to form by capturing them in its own gravity or sufficiently diverting them so that they aren’t threats to the inner planets. This allowed those planets to form and, in the case of Earth, for life to form and flourish. Jupiter didn’t stop all such objects, of course, but it has been noted that each of the inner planets has suffered from far fewer strikes than might have been expected given the amount of material that was flying around during the early years of the Solar System. If this theory is correct, then we owe our existence to at least some degree to Jupiter and its massive gravitational pull.

The mission’s most spectacular assignment will come more than two years from now at the end of Juno’s mission. At that point, like the Galileo probe did, Juno will divert its orbit for a suicidal dive into Jupiter’s atmosphere. This time around, scientists have designed a much stronger probe in the hope that it will be able to transmit for a longer period than its predecessor did and that, perhaps, we’ll learn a little bit more about what lies beneath those thick clouds.