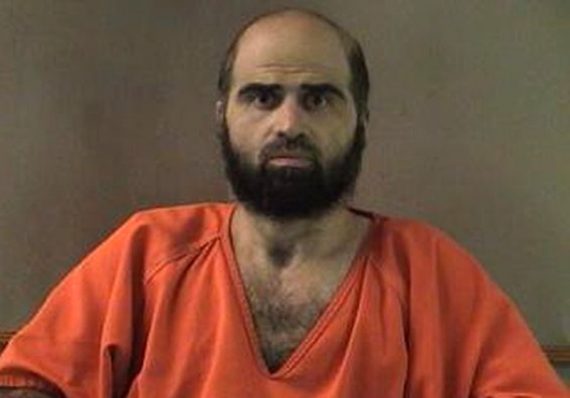 A military jury has sentenced Major Nidal Hasan to death for his role in the shootings at Fort Hood on November 5th, 2009:

KILLEEN, Tex. — Maj. Nidal Malik Hasan, the Army psychiatrist who admitted shooting to kill in a Fort Hood building here packed with unarmed soldiers nearly four years ago, once said he wished he had died in the attack so he could become a Muslim martyr. On Wednesday, after deliberating a little more than two hours, a jury of Army combat veterans and senior officers sentenced him to death by lethal injection for killing or wounding more than 40 soldiers on Nov. 5, 2009.

The same jury had found Major Hasan guilty last Friday of 45 counts of murder and attempted murder in a shooting rampage that a Senate report called the deadliest act of terrorism on American soil since Sept. 11, 2001. The sentence suggested that the jury agreed with the Army’s lead prosecutor, Col. Michael Mulligan, who told them earlier in the morning in his closing argument that Major Hasan was not and never would be a martyr.

“Do not be fooled,” Colonel Mulligan said. “He is not giving his life. We are taking his life. This is not his gift to God. This is his debt to society.”

Major Hasan is likely to become the first American soldier in decades to be executed in the military’s death chamber in Fort Leavenworth, Kansas, an execution that will require presidential approval.

Driven, he said, by a hatred of American military action in the Muslim world and a desire to protect Taliban leaders in Afghanistan, Major Hasan turned on troops wearing the same camouflage uniform as his own, using those green fatigues and his laser-sighted semiautomatic pistol to target soldiers but avoid civilians. Firing 146 rounds at men and women as they crawled on the floor or crouched behind desks and cubicles, he killed 12 soldiers and a civilian who lunged at him with a chair.

Inside a Fort Hood courtroom fortified with blast-resistant barriers and members of the military police, Major Hasan showed no emotion as the jury forewoman, an Army colonel, read the sentence. All 13 jurors — nine colonels, three lieutenant colonels and one major — voted for the death penalty. Other death sentences have been handed down by juries in military courts in recent years — Hasan Akbar, the Army sergeant convicted of a grenade attack on his own camp in Kuwait, received one in 2005 — but experts in military law said Major Hasan’s case was unique.

Major Hasan was the first defendant to represent himself in a military capital-punishment case in modern times, raising a host of issues. One of them is the conflict between his right to self-representation and the requirement that death penalty cases be given special protections to ensure a fair verdict and sentence. Some military legal experts suggested that Major Hasan’s case — in which he became a nonparticipant at his own trial and sought the death sentence — represented a fundamental breakdown of the military justice system.

Major Hasan admitted to the jury in his opening statement that he was the gunman. He asked few questions, made few objections to testimony and entered one exhibit into evidence — a portion of an officer evaluation report in which he received high marks. He made no closing argument. On Tuesday, Major Hasan had the opportunity to make an unsworn statement free from cross-examination by prosecutors as part of his sentencing defense. He said nothing, called no witnesses and presented no evidence. His case amounted to three words: “The defense rests.”

After Colonel Mulligan ended his closing argument on Wednesday, Major Hasan told the judge he had no closing statement.

The last execution carried out at Fort Leavenworth was in April 1961, with the hanging of John A. Bennett, an Army private convicted of the rape and attempted murder of an 11-year-old Austrian girl. President Dwight D. Eisenhower signed his execution order.

If Major Hasan is to become the first soldier to be executed since Private Bennett, the process will likely take an additional 10 or 15 years. An automatic appeals process will inch Major Hasan’s case through military and federal appellate courts, which have overturned or commuted a number of military death sentences in recent years, often because of procedural issues involving ineffective legal assistance.

The President who ultimately has to make that decision, though, will not be Barack Obama, and it probably won’t be his immediate successor either.