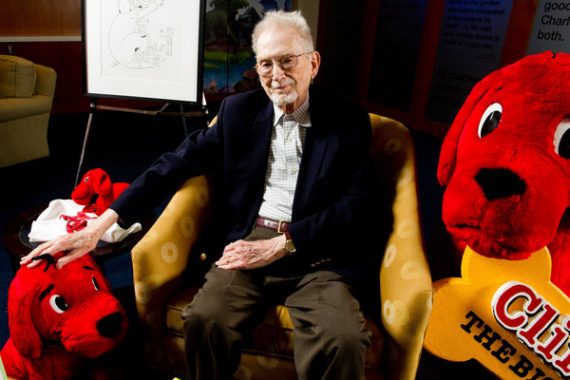 Norman Birdwell, the author and illustrator behind one of the most successful series of children’s books ever, has died at the age of 86:

Norman Bridwell, the creator of Clifford the Big Red Dog, a figure who looms as large in toddler lit as the great white whale does in the American canon, died on Friday in Oak Bluffs, Mass., on Martha’s Vineyard. He was 86.

Kyle Good, a spokeswoman for Scholastic Books, which over the past half-century has published dozens of Clifford titles by Mr. Bridwell, confirmed his death without specifying a cause. Mr. Bridwell’s wife of 56 years, Norma, told The Associated Press that he had prostate cancer and that he had been in the hospital for three weeks after a fall at his Martha’s Vineyard home in Edgartown.

Mr. Bridwell was an out-of-work commercial artist living in New York City when he sold the idea for a single book about a dog big enough for his loving owner, a little girl, to ride. That had been his own fantasy as a little boy, he said.

In the actual drawing of the book, Clifford turned out close to the size of a house. He was an affectionate, slightly clumsy, eager-to-help creature who had flaws — he had a tendency to dig up flowers, among other things — and caused problems. But he was nonetheless the embodiment of kindness and amiability, a four-legged, wet-nosed, bright red lesson in learning to get along with others.

His choice of color, Mr. Bridwell explained, was serendipitous: A jar of red paint happened to be situated on his desk on the day he first drew a picture of a little girl and a big dog. He wanted to name the dog Tiny, though his wife, Norma, discouraged the obvious joke and named him Clifford, after an imaginary friend from her childhood. The little girl who owned him, Emily Elizabeth, was named for their infant daughter.

Published in 1963, “Clifford the Big Red Dog” led to a parade of Clifford books, tales of the dog galumphing through simple experiences that very young children would recognize as familiar: “Clifford’s Family,” “Clifford’s Good Deeds,” “Clifford’s Bathtime” and the like. And almost from the beginning they featured characters, especially children, of varied ethnicities and races.

The series became a read-aloud literary staple, an international favorite for parents who read to their children before the children can read themselves. The books, which have been translated into 13 languages, have sold more than 129 million copies, according to Scholastic, and have inspired an animated television series and a full-length animated film.

“I do remember quite a stir on the floor above mine when the Clifford manuscript arrived; it had been turned down by nine publishers,” Dick Robinson, the chairman and president of Scholastic, said in a video interview on the occasion of Clifford’s 50th anniversary in 2013.

Mr. Robinson, the son of the company’s founder, added: “Clifford was a lovable dog, an awkward character, shy, very big and therefore always bumping into things and causing a stir. And in Clifford children saw themselves.”

Norman Ray Bridwell was born in Kokomo, Ind., on Feb. 15, 1928. His father, Vern, was a factory worker; his mother, Leona, was a homemaker. Norman drew from an early age and after high school studied at the John Herron Art Institute in Indianapolis (now the Herron School of Art and Design, a part of Indiana University) and at Cooper Union in New York.

Started more than 50 years ago, the “Clifford” series is still going strong today for Scholastic, with two more books in the pipeline for publication in 2015, likely the last new books in the series unless someone takes it over. Like many people who have grown up in that time, I have many good memories of the books themselves from my childhood. The animated television series was a bit after my time, starting in 2000 and lasting for about three years, from 2000 right up until the death of actor John Ritter, who provided the voice for Clifford, The books continued to be published, though, and by all accounts continued to provided the same messages that they did when Birdwell first started.

Well done, Mr. Birdwell and thanks for the memories.