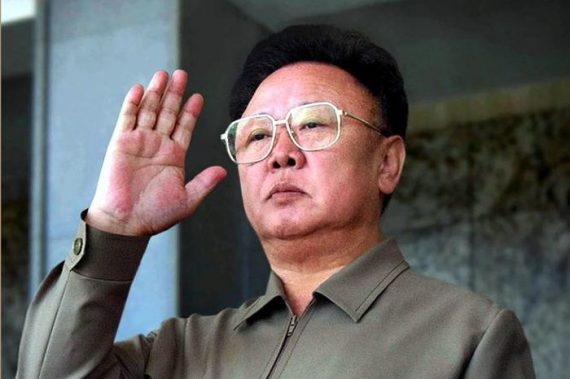 Via the Associated Press, news that the man who has led North Korea since 1994 is dead:

Kim’s death was announced Monday by the state television from the North Korean capital, Pyongyang.

Kim is believed to have suffered a stroke in 2008 but appeared relatively vigorous in photos and video from recent trips to China and Russia and in numerous trips around the country carefully documented by state media. The leader, reputed to have had a taste for cigars, cognac and gourmet cuisine, was believed to have had diabetes and heart disease.

A little more than a year ago, Kim had begun grooming his third son, 28 (or 27 ) year old Kim Jong-Un as his successor, promoting him to the rank of four-star General in the Army and giving him a high position in the party leadership. However, it’s not at all clear that the other power centers in North Korea are going to accept him as their leader. So we could be looking at an era of increased tensions and a rough transition.

The BBC seems to be the first media outlet to post an obituary:

Kim Jong-il was one of the world’s most reclusive and enigmatic leaders, presiding over a secretive and internationally isolated country.

The world’s only hereditary communist ruler, he was criticised for flagrant human rights abuses and for threatening the stability of the region by pursuing a nuclear weapons programme and testing long-range missiles.

When he assumed power after the death of his father, Kim Il-sung, in 1994, very little was known about Kim Jong-il. He had seldom been seen in public.

He was said to have personally ordered the shooting down of a South Korean airliner in 1987.

The South Korean media portrayed him as a vain man, a playboy with a bouffant hairstyle and sporting platform shoes in order to appear taller.

Official North Korean accounts say he was born in a log cabin and the event was reportedly marked by a double rainbow and a bright star in the sky.

They say he wrote six operas in two years and designed one of Pyongyang’s most famous landmarks.

In fact, according to outside experts, Mr Kim was born near the Russian city of Khabarovsk where his guerrilla father was receiving Soviet military support.

Subsequently, the young Kim spent the Korean War in China.

Like most of North Korea’s elite, he graduated from Kim Il-sung University.

In 1975, he acquired the title Dear Leader and five years later joined the Central Committee of the Korean Workers Party and was given special responsibility for art and culture.

In 1978, he ordered the abduction of a South Korean film director, Shin Sang-ok and his actress wife Choi Eun-hee.

They were held separately for five years before being reunited at a party banquet.

They said afterwards that Mr Kim had apologised for the kidnappings and asked them to make movies for him. They completed seven before escaping to the West in 1986.

Kim Jong-il’s love of the cinema bordered on the obsessive. He is said to have collected a library of 20,000 Hollywood movies and to have even written a book on the cinema. Elizabeth Taylor was believed to have been his pin-up.

Of course, he will be remembered mostly for the horror he inflicted on his people:

In 1991, he was elected supreme commander of the Korean People’s Army. Analysts believe he was given the position to counter potential resistance to an eventual succession.

By now, North Korea’s rigid centrally-controlled economy had slipped into an ever-deepening economic crisis exacerbated by the collapse of the country’s main trading partner, the Soviet Union.

Trade dried up and the regime even ran out of fuel for factories and offices.

Natural disasters led to crop failures and hundreds of thousands are believed to have died. Potential unrest was quashed by the authorities.

This grave state of affairs continued after Kim succeeded his father on his death in 1994. However, Kim Jong-il did relieve the crisis somewhat by appealing for international assistance, particularly from China.

It was also under the younger Kim, of course, that North Korea apparently finally perfected its decades long effort to obtain nuclear weapons, and while the country’s stockpile is believed to be relatively small, it exists nonetheless. South Korea has placed it’s military on a state of heightened alert, which seems a wise precautionary move for the time being, and Asian stock markets took a dive as soon as the news was made public at Noon local time.  Get ready to be a little more nervous about the Korean peninsula for a few days at least.