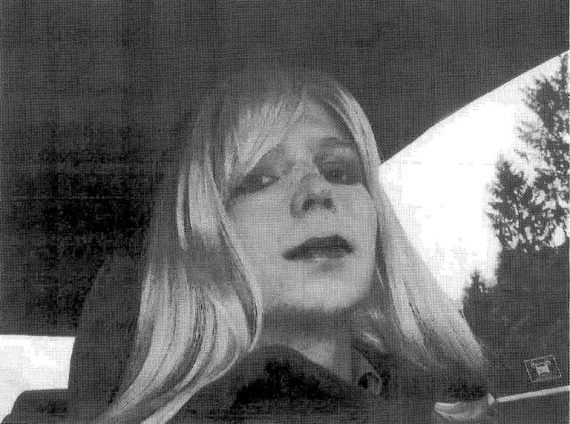 President Obama has commuted the sentence of Chelsea Manning, the former Army private who stole thousands of gigabytes of information while serving in the U.S. Army and giving the information to Wikileaks:

WASHINGTON — President Obama on Tuesday largely commuted the remaining prison sentence of Chelsea Manning, the army intelligence analyst convicted of an enormous 2010 leak that revealed American military and diplomatic activities across the world, disrupted the administration, and made WikiLeaks, the recipient of those disclosures, famous.

The decision by Mr. Obama rescued Ms. Manning, who twice tried to commit suicide last year, from an uncertain future as a transgender woman incarcerated at the male military prison at Fort Leavenworth, Kan. She has been jailed for nearly seven years, and her 35-year sentence was by far the longest punishment ever imposed in the United States for a leak conviction.

Now, under the terms of Mr. Obama’s commutation announced by the White House on Tuesday, Ms. Manning is set to be freed on May 17 of this year, rather than in 2045.

The commutation also relieved the Department of Defense of the difficult responsibility of her incarceration as she pushes for treatment for her gender dysphoria — including sex reassignment surgery — that the military has no experience providing.

In recent days, the White House had signaled that Mr. Obama was seriously considering granting Ms. Manning’s commutation application, in contrast to a pardon application submitted on behalf of the other large-scale leaker of the era, Edward J. Snowden, the former intelligence contractor who disclosed archives of top secret surveillance files and is living as a fugitive in Russia.

Asked about the two clemency applications on Friday, the White House spokesman, Joshua Earnest, discussed the “pretty stark difference” between Ms. Manning’s case for mercy with Mr. Snowden’s. While their offenses were similar, he said, there were “some important differences.”

“Chelsea Manning is somebody who went through the military criminal justice process, was exposed to due process, was found guilty, was sentenced for her crimes, and she acknowledged wrongdoing,” he said. “Mr. Snowden fled into the arms of an adversary, and has sought refuge in a country that most recently made a concerted effort to undermine confidence in our democracy.”

Ms. Manning was still known as Bradley Manning when she deployed with her unit to Iraq in late 2009. There, she worked as a low-level intelligence analyst helping her unit assess insurgent activity in the area it was patrolling, a role that gave her access to a classified computer network.

She copied hundreds of thousands of military incident logs from the Afghanistan and Iraq wars, which, among other things, exposed abuses of detainees by Iraqi military officers working with American forces and showed that civilian deaths in the Iraq war were likely much higher than official estimates.

The files she copied also included about 250,000 diplomatic cables from American embassies around the world showing sensitive deals and conversations, dossiers detailing intelligence assessments of Guantánamo detainees held without trial, and a video of an American helicopter attack in Baghdad in two Reuters journalists were killed, among others.

She decided to make all these files public, as she wrote at the time, in the hope that they would incite “worldwide discussion, debates, and reforms.” WikiLeaks’ disclosed them — working with traditional news organizations including The New York Times — bringing notoriety to the group and its founder, Julian Assange.

The disclosures set off a frantic scramble as Obama administration officials sought to minimize any potential harm, including getting to safety some foreigners in dangerous countries who were identified as having helped American troops or diplomats. Prosecutors, however, presented no evidence that anyone was killed because of the leaks.

At her court-martial, Ms. Manning confessed in detail to her actions and apologized, saying she did not intend to put anyone at risk and noting that she was “dealing with a lot of issues” at the time she made her decision.

Testimony at the trial showed that she had been in a mental and emotional crisis as she came to grips, amid the stress of a war zone, with the fact that she was not merely gay but had gender dysphoria. She had been behaving erratically, including angry outbursts and lapsing into catatonia midsentence. At one point she had emailed a photograph of herself in a woman’s wig to her supervisor.

Prosecutors said that by making secret material available for publication on the internet, anyone — including Al Qaeda — could read it. And they accused Ms. Manning of treason, charging her with multiple counts of the Espionage Act as well as with “aiding the enemy,” a potential capital offense, although they said they would not seek her execution.

Ms. Manning confessed and pleaded guilty to a lesser version of those charges without any deal to cap her sentence. But prosecutors pressed forward with a trial and won convictions on the more serious versions of those charges; a military judge acquitted her of “aiding the enemy.”

In her commutation application, Ms. Manning said she had not imagined that she would be sentenced to the “extreme” term of 35 years, a term for which there was “no historical precedent.” (There have only been a handful of leak cases, and most sentence are in the range of one to three years.)

“I take full and complete responsibility for my decision to disclose these materials to the public,” she wrote. “I have never made any excuses for what I did. I pleaded guilty without the protection of a plea agreement because I believed the military justice system would understand my motivation for the disclosure and sentence me fairly. I was wrong.”

This decision does not come entirely as a surprise, of course. I noted last week that Manning was apparently on the short list for possible commutation at the end of President Obama’s term and her case had become something of a worldwide cause due largely to alleged mistreatment she was receiving in prison related to the revelation that she was transgendered. Additionally, there were many advocates on Manning’s side who argued that her sentence was excessive given the fact that other leakers have only received sentences of, at most, one to five years. The difference, of course, is that Manning was charged, tried, convicted, and sentenced in a military rather than a civilian court and that the sentences imposed on members of the military have often been harsher than those imposed on civilians convicted of similar offenses. Finally, the fact that Manning has apparently not adjusted well to imprisonment due in no small part to her being transgender has made her case something of an international cause celebre, with many people calling on the President to pardon her outright rather than merely commuting an arguably excessive sentence.

On the whole, as I said when the news of Manning’s potential commutation was first released, I don’t see this decision as problematic. Unlike Edward Snowden, who arguably was more responsible in what he leaked to the public, Manning did not seek to run away from facing the consequences of her actions and indeed initially sought to plead guilty to the charges against her rather than face a trial. The prosecutors in her military case, though, chose not to accept a plea deal and proceed with the most serious charges and a sentence that was arguably harsher than necessary or called for under the circumstances. Given that and the fact that Manning accepted responsibility for her crimes in her application to the White House, it seems appropriate that her request was granted. Also, the fact that the sentence was merely commuted means that Manning will still have to live with the civilian consequences of her crimes while a member of the military.

The decision to commute Manning’s sentence will likely prove to be controversial in many circles. In the eyes of many, she remains a criminal who put the nation in danger by revealing secret military and intelligence information that put Americans, and Iraqis who were cooperating with American personnel, in danger without any regard for the consequences of her actions. The response may be muted given the fact that the President chose to issue a commutation rather than a pardon, but in the eyes of many members of the public the effect will be seen as the same and there’s some logic in that response. In any case, as I said, given the facts of Manning’s case I think the decision to commute is understandable and can at least be supported by the evidence. At the same time, of course, there is the whole issue of whether or not pardons or commutations or pardons by Presidents are a good

At the same time, of course, there is the whole issue of whether or not pardons or commutations or pardons by Presidents are a good idea to begin with. On some level, it harkens back to the days when Kings, Queens, and Emperors were the sole law of the land and held the fate of defendants in their hands and subject to their arbitrary decision. That’s one reason why, in many states, the pardon and commutation authority of Governors has been limited or curtailed entirely and the process has been placed with an independent board comprised of people appointed by Governors and state legislatures together. In most recent White Houses, there’s at least been an effort to mimic that process in that all applications for pardons or commutation are reviewed by the civil service attorneys at the Justice Department, and the President’s decision is usually based at least in part on the recommendation of the Department of Justice. At least under this system there is less of a ‘royal’ feel to the entire process. There’s nothing in the law that requires the President to follow this process, though, nor is there any requirement that someone formally apply for a pardon or commutation. If he wished to do so, President Obama could pardon anyone convicted or charged with a Federal crime for whatever reason he wanted. The potential problems with this system should be obvious. The system we have, though, is based in the Constitution so it would require an Amendment to change things.

In addition to Manning, Obama also pardoned General James Cartwright, who had been convicted on a charge of lying to law enforcement in connection with his involvement in leaking details about the programs that apparently helped to create to Stuxnet computer virus that infected Iran’s nuclear research labs earlier in the decade. Additionally, CBS News White House Correspondent reports that we can expect more commutations and, possibly, pardons before President Obama leaves office on Friday. Whether any will prove to be as newsworthy as the Manning commutation is unknown at this point.