Obama Continues To Hold Huge Lead Over Romney Among Latinos 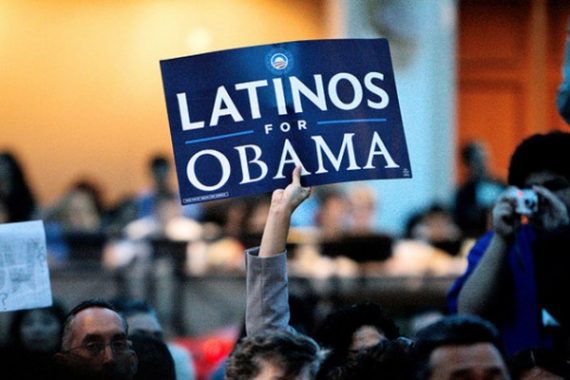 A new NBC News/Wall Street Journal/Telemundo poll shows, once again, that President Obama has a tremendous and clearly insurmountable lead over Mitt Romney among Latino voters, but there’s a real question over how likely those voters are going to be to actually turnout on Election Day:

Hispanics, the largest-growing segment of the U.S. population over the past decade, said they preferred Obama over Romney in the presidential race, 63 to 28 percent.

That margin has been relatively consistent since May when the poll started sampling additional Latino interviews. It’s also, though, far below the stated Romney campaign goal of winning 38 percent of the Hispanic vote.

“Our goal is to do better than four years ago and the McCain campaign did — our goal is to hit 38 percent with the Hispanic vote,” Jose Fuentes, a national co-chairman of Romney’s Hispanic leadership team, told The Hill newspaper. “That’s our goal. That’s our national average.”

By every measure and every issue – from foreign policy to immigration, the economy to taxes – Hispanic registered voters said they overwhelmingly preferred Obama over his Republican opponent.

That’s good news for the President and bad news for Romney. The odds that the Romney team will get anywhere close to the 38% goal that Fuentes set seems to be pretty low, unless this and the other polls of Latino voters that we’ve seen are pretty low. That’s not surprising, of course, given the way the GOP has essentially ignored the concerns of Latino voters while doubling down on the anti-immigration rhetoric, and even adding a hard line immigration plank to the platform. At the same time, though, these results may not provide the President with quite the advantage that they appear to, because Latino voters are among the least enthusiastic voters out there at the moment:

Despite President Obama’s June immigration announcement – which halted the deportation of illegal immigrants younger than 30 and who were brought to the United States as children – there has not been an uptick in Latino enthusiasm. That policy took effect Aug. 15, but Latino interest in this election is at its lowest point in the NBC-WSJ-Telemundo poll.

Just 61 percent of Latinos indicated a high level of enthusiasm in the upcoming election (registering an “8,” “9” or “10” on a 10-point scale). That’s 20 points below the average of 81 percent of all voters. And almost 20 points below 2008 levels for Latinos at about the same time before the election.

In this poll, in fact, one in 10 Latinos declared themselves a “1” – the highest level recorded this cycle.

And less than half (49%) count themselves as the highest-interest voters (9s and 10s). That’s the lowest among all voting groups in the NBC/WSJ poll.

They are similar, but below even the interest level of young voters, age 18-34. Fifty-two percent of young voters say they are 9s or 10s. Both should be red flags for the Obama campaign, as both young voters and Latinos are pillars of the president’s reelection hopes.

This is where the Obama campaign’s ground operation will be crucial in mounting get out the vote efforts among these target demographic groups. In several states, including battleground states like Nevada, the Latino vote could be crucial in deciding who wins the state if not the entire election.