An interesting preview from tomorrow’s premiere of This Week With Christiane Amanpour:

In an exclusive interview on “This Week” with Christiane Amanpour, to air this Sunday, Speaker of the House Nancy Pelosi dodged a question about how she would have voted on a bill funding the war in Afghanistan.

Now you didn’t vote. I know the speaker doesn’t have to vote. But how would you have voted?” Amanpour asked Pelosi in the Speaker’s ceremonial office in the Capitol.

“Well we brought the bill to the floor,” Pelosi explained. “And that was a statement that said that we knew that our troops needed to have … would be provided for them. So we will never abandon our men and women in uniform,” she said. “On the other hand it gave our members a chance to express their view,” the Speaker said.

“How does this figure into our protecting the American people? Is it worth it?” Pelosi asked rhetorically.

“That is the question,” Pelosi replied.

“But that’s my question to you,” Amanpour pressed.

“Well we will, as I said, we will see the metrics as they unfold in the next few months,” the Speaker said.

Perhaps it’s incorrect, but the logical conclusion to draw from Speaker Pelosi’s refusal to answer the question is that she didn’t want to come out and say that she opposes the war policy being advanced by the leader of her party. The Democrats in Congress don’t seem to have Obama’s back on this war, and the Republicans will abandon him the second things start turning bad. 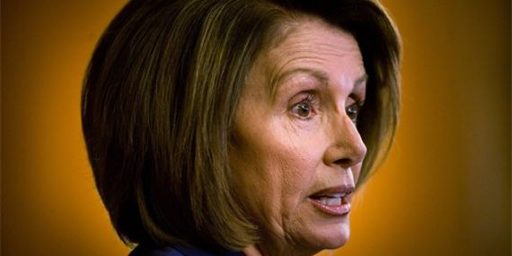 Pelosi Dodges Is Afghanistan ‘Worth It’ Question