Photo Of The Day: The Blue Sunsets Of Mars 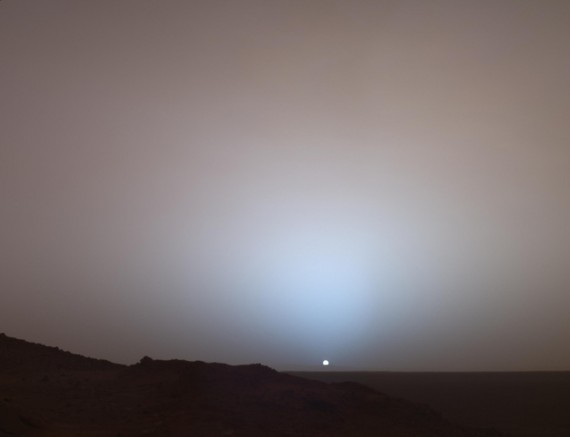 Let’s stand facing the sun on Mars. It’s early evening. The sun is setting. Light is streaming toward our eyes, moving through the dusty air. What happens?

Sunshine, as you know, contains many different wavelengths of light. If you catch a beam of light in a prism (Newton did this) it breaks into a rainbow of colors — reds, violets, blues. When the sunshine on Mars hits the clouds of fine dust floating through the air, it also breaks into different colors. Martian dust is exactly the right size to absorb the blue wavelengths of light and scatter red wavelengths all over the sky. That’s why if you are standing on Mars and look away from the setting sun, most of the sky is rosy, pink, and various shades of red.

But now look straight at the setting sun. On Mars, the beams of light streaming toward you, having lost their red waves, show the wavelengths that haven’t scattered off. That remaining light is predominantly blue. So when you look straight at the sun on Mars, you see a haze of blue. Look away from the sun, and the light is red.

The picture was taken in 2005 by the Spirit Rover. The camera used does enhance the rose-like colors in the photo, but the blue is pretty much how it would appear to the human eye.