Canada must have a Federal Election by late October, and the polls are showing that Prime Minister Trudeau could be in political trouble.

Canadian Prime Minister Justin Trudeau finds himself in political trouble in the wake of a political scandal that has been quietly developing north of the border:

With the federal election less than three months away, a new poll shows the Conservative Party gaining ground and running neck and neck with the Liberals in a province that was key to Trudeau’s win in 2015.

Andrew Scheer’s Conservatives are polling particularly well among those who propelled the Coalition Avenir Québec into power in the last provincial election, and those who live in the Quebec City region.

At the same time, the environment remains the top concern among residents of the province.

The Forum Research poll of 977 Quebecers taken in late July shows that 30 per cent would vote for the Liberals if a federal election was held today, while 28 per cent would support the Conservatives. The Bloc Québécois garnered 15 per cent of the vote, while 10 per cent said they would vote for the Green Party and 9 per cent for the NDP. The fledgling People’s Party of Canada, led by Maxime Bernier, took 4 per cent of the vote.

In a similar poll taken June 11-12 in Quebec, 32 per cent said they would vote Liberal, and 25 per cent chose the Conservatives. Support for the NDP, Green Party and Bloc remained stable.

The Liberals’ took 40 of 78 seats in the province, surpassing expectations. Trudeau won 36 per cent of the popular vote in Quebec, the NDP 25 per cent, the Bloc 19 per cent, the Conservatives 17 per cent, and the Greens three per cent.

A separate poll of 1,733 Canadians showed the Conservatives pulling ahead of the Liberals nationally, with 34 per cent favouring Scheer and 31 per cent saying they would vote for Trudeau if the election was today. The Greens and the NDP each scored 12 per cent, and the Bloc and the PPC garnered 5 per cent.

Quebecers said the environment was the most important issue for them heading into the federal elections on Oct. 19, with 31 per cent listing it as their leading concern, followed by the economy (22 per cent) and health care (15 per cent).

In a similar vein, the Toronto Star reports that the Liberal and Conservative parties are essentially tied nationally:

OTTAWA—The federal Liberals and Conservatives are running at a statistical tie nationally with less than three months to go before the national election, according to the latest numbers from Forum Research.

The New Democrats and Green party remain deadlocked at 12 per cent each, while the Bloc Québécois and the upstart People’s Party of Canada both command 5 per cent of decided and leaning voters.

A big part of the Conservatives’ national lead is their very strong performance in the Prairies, according to Forum Research President Lorne Bozinoff.

But the Liberals continue to enjoy a lead in vote-rich Ontario (36 per cent to the Conservatives’ 31 per cent) and Québec (34 per cent to 23 per cent), making Conservative Leader Andrew Scheer’s path to the prime minister’s office more difficult.

Based on Forum’s projections, if an election were to be held today, the Conservatives would win 152 seats in the House of Commons and the Liberals would take 150. The NDP would retain 22 seats and the Green party would take three — a modest number, but still a historic breakthrough for Elizabeth May’s party. The Bloc Québécois would finish with 11 MPs, while Maxime Bernier’s PPC would fail to pick up a single seat.

That would mean a minority parliament, with the balance of power resting with the progressive New Democrats and Greens. It would also mean Scheer’s odds of forming government would be much longer.

“It’s hard to see (the Conservatives) getting enough to get a majority with another party, given that it is the three progressive parties that really will be holding the balance of power,” said Bozinoff of his projections.

The close race in the lead up to the election has political observers and partisans expecting the parties’ campaigns to matter even more than usual.

British Columbia remains difficult to project, both for pollsters and for politicos. Forum puts the Conservatives’ support in the province at 38 per cent to the Liberals’ 23 per cent, but the potential for four-way vote splits among the major parties makes the province’s lower mainland a bit chaotic electorally.

All of this is consistent with other national polling that has taken place over the past several months showing a tight race nationally between Trudeau’s Liberal Party and the Conservative Party which is currently led by Andrew Scheer, a Member of Parliament from Saskatchewan first elected in 2004 and re-elected to the riding of Regina Qu’Appelle from 2006 going forward. These polls are important because, as a matter of law, there must be a new Federal Election on or before October 22, 2019, and the polling indicates that, as of now, neither of Canada’s two major parties would walk away with enough seats to form a majority. This would mean that there would either be a minority government, a hung Parliament, or that one of the parties would be required to enter into a coalition agreement with one of the minor parties. This last alternative would seem to benefit Trudeau since the major lesser party, the New Democrats, tend to be to the left in the Canadian political spectrum and are more likely to agree to a governing agreement with the Liberals than the Conservatives.

This battle in the polls is taking place in the context of a scandal that has slowly been evolving north of the border that could not possibly have come at a worse time for Trudeau politically. The Wall Street Journal has an excellent article summarizing what has happened. Unfortunately, that article is behind a paywall. Basically, though involves the connections between Trudeau and those around him and an engineering firm called SNC-Lavalin. The scandal itself dates back to before Trudeau became Prime Minister to a lawsuit filed by law enforcement charging the company with corruption and fraud regarding its dealings with the Libyan government over a ten-year period from 2001 to 2011. This, of course, was a period when the country was still ruled by Muammar Gadhafi and his cohorts. After these charges were filed, the company threatened to move its headquarters from Montreal to London, England.

Trudeau apparently personally intervened in the matter, citing the fact that the move could cost as many as 9,000 jobs as well as economic dislocation for businesses that relied on SNC-Lavalin. Due to the fact that there is a record of a long lobbying record between the company and Trudeau and other top Liberal Party officials has led some to allege that Trudeau’s personal involvement and the allegation that he pressured Canada’s Attorney General to settle the above-referenced lawsuit without going to trial. As a result, the allegation has been that Trudeau and other party officials were trying to get a favorable resolution of the lawsuit to advance the party’s interests in placating a corporation that had been a supporter in the past.

So far, Trudeau has given no indication of when he might call a national election, but that is going to have to happen soon. This polling seems to make clear that it couldn’t come at a worse time for Trudeau’s political future. 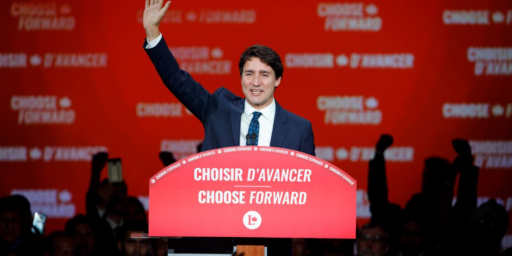 Trudeau Holds On To Power In Minority Government